Spitfire and the Wonderbolts, putting on a show.

Wonderbolts to the rescue.

Rarity knocks out Spitfire by accident.

Rarity and the Wonderbolts falling.

Plummeting to the ground.

Spitfire on Rainbow's back.

Spitfire is still knocked out, while being lifted by Rainbow Dash.

Spitfire thanking Rainbow Dash.
Add a photo to this gallery 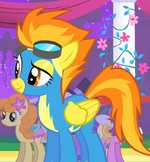 Spitfire asks Rainbow to hang out.

Spitfire enjoying a nice conversation with one of the ponies.

Spitfire is impressed by Dash's attempt to get their attention.

Dashed by.
Add a photo to this gallery

On your mark, get set, go!
Add a photo to this gallery

The symbol on her suit is coming out a bit.

Rainbow side-by-side with her idol.

Spitfire leaves with the rest.
Add a photo to this gallery

Strutting like she owns the aerospace. Maybe she does!

Talking to the future Wonderbolts.

Think you've got the guts?!

None of you are Wonderbolt material!

"Think you're something special!?"

Does RD have guts?

Once again I repeat: You better give me....

The trail is obscuring her face.

About to walk off.

About to give a speech.

My yelling will make you derp!!!

It is at death speed.

About to mark a trading card?

So ponies do wear horseshoes!

"Today, you will all be participating in a flag hunt."

Carry on you two!

I guess, that was a useful tactic.

What are you saying, kid?

Let her in, guys.

You're no longer being a lead pony.

Give me that badge!

Now come on, and prove yourself Wonderbolt material.

Kid's gonna go far.
Add a photo to this gallery

Retrieved from "https://mlp.fandom.com/wiki/Spitfire/Gallery/Seasons_1-3?oldid=2164337"
Community content is available under CC-BY-SA unless otherwise noted.