Spoiled Rich (née Spoiled Milk) is a female Earth pony and Diamond Tiara's manipulative and overbearing mother. She is first mentioned indirectly by Babs Seed in One Bad Apple, and she makes her series debut in Crusaders of the Lost Mark.

According to former writer Amy Keating Rogers, Spoiled Rich had several prior names in production, including "Married Rich" and "Stuck Up Rich".[1] She was designed by Rebecca Dart, Kora Kosicka, Fernanda Ribeiro, and Charmaine Verhagen.[2]

Spoiled Rich is first alluded to by Babs Seed in the episode One Bad Apple, where she threatens to tell Diamond Tiara's and Silver Spoon's mothers about their bad attitudes.

In Crusaders of the Lost Mark, Apple Bloom first mentions her by name, mentioning that she is head of the school board. After Diamond Tiara loses the election for school president, she goes home to find her mother berating her for losing. She displays a patronizing attitude towards ponies with a lower social standing than her family's, and has no qualms about calling the Cutie Mark Crusaders "blank flanks" among other derogatory terms.

During the songs The Pony I Want to Be and Light of Your Cutie Mark, Diamond Tiara's condescending nature towards her classmates is shown to be the result of Spoiled Rich's dictatorial parenting, as well as her fear of her and Filthy Rich's disapproval.

When Diamond Tiara comes to the Ponyville Schoolhouse with the Crusaders during a school board meeting, Spoiled Rich once again accosts her daughter for fraternizing with "confused, insignificant lowlifes". However, Diamond Tiara stands up to her for controlling her life and forces her to deliver Filthy Rich a school donation request, causing Spoiled Rich to back down.

In A Hearth's Warming Tail, Spoiled Rich appears alongside Diamond Tiara depicted as a literary character. In Applejack's "Day" Off, she has a brief speaking role while waiting to use the Ponyville Day Spa steam room, bragging about how many rooms her house has. In Where the Apple Lies, Spoiled Rich appears in flashback, where her maiden name is revealed to be "Spoiled Milk".

In It Isn't the Mane Thing About You, Spoiled is mentioned by Filthy Rich as he buys her flowers from Daisy, Lily Valley, and Rose. He later returns them, having learned that Spoiled only likes purple flowers.

In A Horse Shoe-In, Spoiled Rich is among the ponies applying to be Starlight Glimmer's vice headmare at the School of Friendship. After she expresses her intention to have parts of the school named after her and teaches the students poor lessons in loyalty, Starlight rejects her application, making her the first candidate removed from the running.

In The Ending of the End - Part 2, Spoiled takes shelter with Filthy Rich, Diamond Tiara, and other Earth ponies as Ponyville closes itself off from the other pony races.

Spoiled Milk appears in a flashback of Where the Apple Lies in Harvesting Memories.

Spoiled Rich is a character in Gameloft's mobile game, and serves as a boss battle helper during the "Rarity's Retro Revolution" event. The game's description of her states, "To Diamond Tiara, she's a mother most dear. To everyone else, she's a pain in the rear."

A mini-figure toy and collector card of Spoiled Milk are included in the twenty-fourth wave of mystery packs.

In the Marks in Time expansion set of Enterplay's collectible card game, card #73 R of Spoiled Rich attributes to her and Scootaloo the respective quotes "I taught Diamond Tiara everything she knows!" and "Yeah, we can tell."

"Diamond Tiara! Why are you making that face? That is not the face of a winner."
— Crusaders of the Lost Mark

"It's bad enough you lost to that transplant from Trottingham, but imagine if you'd lost to one of those blank flanks. As a Rich pony, you must always think of your social standing."
— Crusaders of the Lost Mark

"Diamond Tiara! I just happened to be here for the school board meeting, and this is what I see when we adjourn? My daughter associating with confused, insignificant lowlifes? Socializing with their kind is not how you move up in Equestria!"
— Crusaders of the Lost Mark

"Yes, of course, dear."
— Crusaders of the Lost Mark

"Without steam, a steam room's just a room and I've got plenty of those at home. Because I live in a mansion."
— Applejack's "Day" Off

"My amazing husband-to-be is running the Rich family business now. Did you know that? Well, now you do."
— Where the Apple Lies

"Honestly, if you're looking for somepony to fund-raise, I can bring in enough bits to have several buildings named after me."
— A Horse Shoe-In 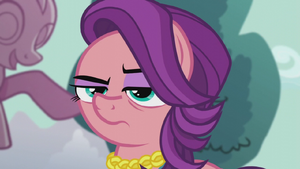