Spring Forward is a female background Earth pony with a pink coat, pale yellow mane and tail, green eyes, and a cutie mark of sometimes carrots and other times an hourglass. She is not named in the show, but she is named in merchandise.

Spring Forward first appears in Friendship is Magic, part 2 running away from Nightmare Moon. She appears later on the Ponyville weather team in Winter Wrap Up as one of the lake scorers. She also appears at Diamond Tiara's cute-ceañera in Call of the Cutie, at Fluttershy's first fashion show in Green Isn't Your Color, and at the Grand Galloping Gala in The Best Night Ever.

Spring Forward appears in The Mysterious Mare Do Well admiring Mare Do Well's heroism, during Becoming Popular (The Pony Everypony Should Know) in Sweet and Elite, and at both wedding ceremonies in A Canterlot Wedding - Part 2.

Spring Forward decorates Canterlot for the Summer Sun Celebration in Princess Twilight Sparkle - Part 1 and appears in the auditorium at the end of Twilight's Kingdom - Part 1.

Spring Forward celebrates with other ponies at the end of The Cutie Map - Part 2 and walks through Canterlot with Diamond Mint in Amending Fences. In The Mane Attraction, she appears attending Coloratura's performance of The Magic Inside at the Helping Hooves Music Festival.

In Spice Up Your Life, Spring Forward appears talking to Prim Posy in Canterlot's Restaurant Row.

In Sparkle's Seven, Spring Forward appears in Applejack's fantasy cheering in the audience for Apple Chord's concert. In The Last Laugh, she appears in a flashback in a line of Cheese Sandwich's customers at Kettle Corn's birthday party.

Spring Forward is named on her Enterplay collectible card game card α #61 R, which gives her the description "Even though she's one of the best skaters in Ponyville, Spring Forward just can't wait for the ice to melt." According to Enterplay's May 9, 2014 full card list by Christine Hullemeyer, Spring Forward "was Romana".[1] 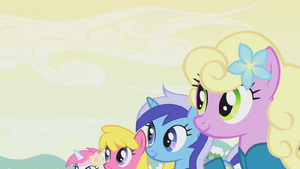