Sprinkle Medley, also named Spring Melody and April Showers, is a female Pegasus pony with a Celeste coat, Persian green mane and tail, baby blue eyes, and a cutie mark of a raining white cloud. She is unnamed in the show, but she is named in merchandise and other media.

Sprinkle has a speaking role in Rainbow Falls, in It Isn't the Mane Thing About You, and in the German and Hungarian versions of The Super Speedy Cider Squeezy 6000.

She shares her design with White Lightning.

Sprinkle Medley is commonly featured as a background pony in Ponyville and Cloudsdale.

Sprinkle Medley makes her first appearance in Friendship is Magic, part 1 in the town hall, waiting for the appearance of Princess Celestia and her act of raising the sun for the Summer Sun Celebration.

In the episode Winter Wrap Up, Sprinkle Medley appears as part of the weather team. Unlike the majority of weather team members, her vest frequently appears with a white band around the openings, and in place of the sun symbol is a white star. Aside from Sprinkle Medley herself, only Rainbow Dash wears a vest like this.

In Sonic Rainboom, Sprinkle Medley works in the snowflake-making section of Cloudsdale's weather factory, and she later appears in the audience at the Cloudeseum. She also appears, with orange eyes, as an entrant in the Best Young Flyer competition; her tag number is obscured. She knocks on Rarity's door and receives her announcement that she's "going to be a while."

In Lesson Zero, Sprinkle Medley appears fighting over Twilight Sparkle's Smarty Pants doll after it gets enchanted by the want it, need it spell. In Luna Eclipsed, she appears wingless running away from Princess Luna during Nightmare Night in Ponyville. In Sisterhooves Social, she makes a background appearance spectating the obstacle course during the titular event at Sweet Apple Acres. In Hearth's Warming Eve, she appears in Canterlot making a snowpony, in the audience for the Hearth's Warming play on the founding of Equestria, and later in the play itself as a pegasus during the meeting of the three pony tribe leaders. In The Super Speedy Cider Squeezy 6000, she appears in the crowd of ponies at Sweet Apple Acres upset over the depletion of cider as Flim and Flam arrive and introduce themselves through song. In A Friend in Deed, she appears in Ponyville as part of the choir singing the Smile Song with Pinkie Pie. In Putting Your Hoof Down, she makes a background appearance at the Ponyville marketplace and subsequently in the audience for Iron Will's assertiveness seminar. In It's About Time, she appears in the crowd of ponies being instructed by Twilight to disaster-proof Equestria. She is seen frequently in Hurricane Fluttershy; she is one of the many Pegasi that help create the tornado for Cloudsdale. In MMMystery on the Friendship Express, she lowers a cake onto a table with Cloud Kicker during the national dessert competition in Canterlot. In A Canterlot Wedding - Part 2, she makes a cameo appearance attending the real Princess Cadance's wedding to Shining Armor and another one flying while watching them enter a wedding wagon.

In Too Many Pinkie Pies, Sprinkle Medley appears in the crowd of ponies protesting the infestation of Pinkie Pie clones in front of the Golden Oak Library as the clones join the crowd. In One Bad Apple, she spectates the Summer Harvest Parade in Ponyville. In Magic Duel, she makes a background appearance spectating Twilight Sparkle's magic performance with levitating animals for the delegates from Saddle Arabia in Ponyville. InSleepless in Ponyville, standing on a street in Ponyville watching as Scootaloo zooms by on her scooter. In Wonderbolts Academy, she appears as a cadet at the Wonderbolt Academy, flying through a cloud ring, kicking a cloud to create lightning during an obstacle course and greeting Rainbow Dash's friends after they are saved from Lightning Dust's tornado. In Just for Sidekicks, she appears as a passenger aboard the Friendship Express. In Games Ponies Play, she appears in Rainbow Dash's flashback in Cloudsdale in the crowd listening as Fillydelphia is named the host city of the Equestria Games. In Magical Mystery Cure, she appears flying over Twilight in Morning in Ponyville with Rainbowshine, in the crowd of ponies complaining to Rarity about her weather control, being a victim of her poor weather during What My Cutie Mark is Telling Me, singing from a window during A True, True Friend, and attending Twilight Sparkle's Princess coronation in Canterlot.

Sprinkle Medley appears in Canterlot and later in Ponyville in Princess Twilight Sparkle - Part 1, in Canterlot in Princess Twilight Sparkle - Part 2, and in Flight to the Finish, Rainbow Falls, Pinkie Pride, Simple Ways, Filli Vanilli, It Ain't Easy Being Breezies, For Whom the Sweetie Belle Toils, Leap of Faith, Trade Ya!, Equestria Games, Twilight's Kingdom - Part 1, and Twilight's Kingdom - Part 2.

In Bloom & Gloom, Sprinkle Medley appears fleeing from a swarm of twittermites. In Tanks for the Memories, she moves clouds with other Pegasi in preparation for winter. In Make New Friends but Keep Discord, she appears at the Grand Galloping Gala. In Slice of Life, she appears at Cranky Doodle Donkey and Matilda's wedding. In Do Princesses Dream of Magic Sheep?, she appears in Ponyville's shared dream. In Rarity Investigates! she watches the Wonderbolts practicing at the stadium from the stands. In Crusaders of the Lost Mark, she puts a new flagpole on the playground during the reprise of The Pony I Want to Be. In What About Discord?, she appears in Ponyville while Twilight Sparkle and Spike walk to Carousel Boutique. She also appears in the final group shot during Friends Are Always There For You in The Cutie Re-Mark - Part 2.

In On Your Marks, Sprinkle Medley appears in the audience for Tender Taps' dance recital. In No Second Prances, she makes a background appearance watching Twilight Sparkle as she searches for Starlight Glimmer in Ponyville at night. In The Cart Before the Ponies, she appears as a spectator for the Ponyville Applewood Derby during Derby Racers. In The Fault in Our Cutie Marks, she appears flying through Ponyville, watching Tender Taps' perform on an outdoor stage, and in Find the Purpose in Your Life spectating Gabby play baseball. In Every Little Thing She Does, she appears as one of the Pegasi moving storm clouds over the Castle of Friendship due to the orders of a spell-enchanted Rainbow Dash. In Where the Apple Lies, she appears in a flashback in the audience for a surgery lecture at the Ponyville Hospital. In Top Bolt, she appears with three other pegasi catching Sky Stinger in a net at the Wonderbolt Academy after he gets launched from the Dizzitron.

In A Flurry of Emotions, Sprinkle Medley attends Spearhead's pop-up art show in the Ponyville Café. In Parental Glideance, she spectates the Wonderbolts' showcase in Canterlot from the private box, and subsequently appears in line for the autograph signing after the show and again as a Wonderbolt cadet flying at the Wonderbolt Academy. In Fame and Misfortune, she makes a background appearance shopping at an apple stand in Cloudsdale and later appears wearing Pinkie Pie fan clothes in the crowd of angry ponies arguing over the publication of the Mane six's Friendship Journal outside the Castle of Friendship. In Triple Threat, she appears attending the Dragon Fire Flame of Friendship ceremony for Thorax and Ember outside Ponyville Town Hall. In It Isn't the Mane Thing About You, she appears in line for the Quills and Sofas store where she has a speaking role offering triple for Rarity's chaise, before it is sold to her.

In School Daze - Part 1, Sprinkle Medley appears flying away from the School of Friendship during the school's Friends and Family Day as Ocellus accidentally crashes into it while transformed as a monster. In Friendship University, she appears in Las Pegasus at Flim and Flam's resort as they present Friendship University during Friendship U. She later appears as a student attending a class, and as one of the ponies gathered outside after Flim and Flam's scheme is exposed, cheering when Twilight offers admission to the former students of Friendship University. In Yakity-Sax, she makes a background appearance walking in Ponyville with Daisy in an overhead shot of the town. In The Washouts, she appears in the audience for each of the titular groups's two shows in Ponyville.

In Sparkle's Seven, Sprinkle Medley appears in Applejack's Apple Chord fantasy in the audience for Apple Chord's concert. In She's All Yak, she appears during Fit Right In in the reused group shot from "The Cutie Re-Mark - Part 2", and dancing in a circle with Sir Pony Moore. In 2, 4, 6, Greaaat, she spectates the buckball game between the School of Friendship and Princess Celestia's School of Magic and also watches the halftime cheerleading routine. In The Big Mac Question, she makes a background appearance at the Ponyville marketplace running away from Discord's living apples.

Sprinkle Medley briefly appears on the steps of the entrance to the Canterlot library talking to Noteworthy. She also appears alongside Rainbowshine in the second establishing shot of Canterlot.

Sprinkle Medley appears in My Little Pony: Friendship is Magic Issue #9, struggling in a tug-of-war contest against Princess Luna, Big McIntosh, Minuette and Golden Harvest along with Shoeshine, Daisy and an unidentifiable pony that already fell in the mud.

Sprinkle Medley appears on the cover of My Little Pony: Friendship is Magic Issue #12, in which she walks along with Princess Cadance, Lemony Gems and other ponies. She also appears on Issue #46 pages 12 and 17, Issue #47 page 20, and My Little Pony: Ponyville Mysteries Issue #4 page 11.

Sprinkle Medley is a character in Gameloft's mobile game.

On at least​[​specify​]​ the DVD Season Four Disc 2, closed captions for the episode Rainbow Falls refer to Sprinkle Medley by the fan-given name "April Showers".

"I hear they're flying for Cloudsdale!"
— Rainbow Falls

"Hooves down, cakes up!"
— Rainbow Falls - along with Rainbowshine

"Three times!"
— It Isn't the Mane Thing About You

"I love flying in the rain! And making it rain! And singing in the rain. And eating lunch in the rain... Admittedly, I might have a problem."
— Enterplay collectible card game Canterlot Nights #23 C card of Sprinkle Medley

"who are you? are you trapped in there? Oh wait, I just made you."
— My Little Pony Facebook post[5] 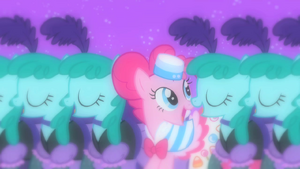