Star Bright is the placeholder name of a male unicorn with a gray coat, two-tone pale blue mane, amber eyes, and a cutie mark of a telescope.

Star Bright first appears in Sweet and Elite as a spectator at the Wonderbolts Derby. He appears at Applejack's send-off party in The Last Roundup, in Ponyville when Cerberus appears in It's About Time, and at the second wedding ceremony in A Canterlot Wedding - Part 2.

In Just for Sidekicks, either Star Bright or "Sightseer" appears on the Ponyville-bound Friendship Express.

In Pinkie Pride, Star Bright watches the goof-off between Pinkie Pie and Cheese Sandwich. In For Whom the Sweetie Belle Toils, he watches the Cutie Mark Crusaders' play. He also appears several times at the Rainbow Falls Traders Exchange in Trade Ya! and as an Equestria Games spectator in Equestria Games. In Twilight's Kingdom - Part 1, he is among multiple other unicorns to have their magic taken by Lord Tirek.

In On Your Marks, Star Bright appears in the audience for Tender Taps' dance recital. In Spice Up Your Life, he appears talking to Written Script in Canterlot's Restaurant Row and later appears walking through Restaurant Row as Pinkie Pie and Saffrom Masala start promoting the Tasty Treat during It's Gonna Work. In The Cart Before the Ponies, he appears spectating the Applewood Derby from a window in Ponyville during Derby Racers. In Buckball Season, he appears as one of the many unicorns unsuccessfully trying out for Rainbow Dash and Applejack's buckball team. He later appears as one of the fans at the Ponyville train station cheering for the Ponyville buckball team as they leave to play in Appleloosa.

In Celestial Advice, Star Bright appears attending Starlight Glimmer and her friends' medal ceremony in the Castle of Friendship. In Parental Glideance, he appears in Canterlot spectating the Wonderbolts' Showcase. In Triple Threat, he appears sitting at a table in a house with Silver Script when Spike pops through a window to ask if they have a friendship problem for him to solve.

In Surf and/or Turf, Star Bright appears as a passenger on the Friendship Express to Mount Aris with Silver Script and listens to Apple Bloom as she talks about the Hippogryphs and the events of My Little Pony The Movie. They later look outside the window upon arriving at Mount Aris. In Horse Play, he appears in the audience for the School of Friendship play on the first time Princess Celestia raised the sun. In Yakity-Sax, he spectates the Wonderbolts Derby in Canterlot and later attends Pinkie Pie Appreciation Day outside Ponyville town hall. In The Washouts, he appears in the audience in each of the titular group's two Ponyville shows.

In Sparkle's Seven, he appears in Applejack's fantasy spectating a concert by Apple Chord. In The Point of No Return, he makes a background appearance reading in the Canterlot Library beside Twinkleshine. In Common Ground, he appears as a cheering in the buckball stadium and subsequently wearing a foam finger during the opening newsreel. He later appears in Appleloosa during a buckball tournament getting an autograph from Snails, entering the stadium and spectating two different games. In Between Dark and Dawn, he makes a cameo appearance in the audience of a performance of the pony version of the musical Wicked during Lotta Little Things. In 2, 4, 6, Greaaat, he spectates the buckball game between the School of Friendship and Princess Celestia's School of Magic and also watches the halftime cheerleading routine. In The Summer Sun Setback, he talks to Silver Script during preparations for the final Summer Sun Celebration in the Canterlot Castle Courtyard and later attends said event. In Daring Doubt, he appears in a Manehattan bookstore attending Ahuizotl's public book reading. In The Last Problem, he appears in a flashback as a passenger of the Friendship Express with Silver Script and subsequently attending Twilight Sparkle's coronation as ruler of Equestria in Canterlot. 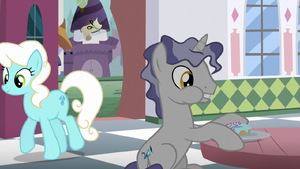