Star Gazer is placeholder name of a male background Earth pony with a light gray coat, brown mane and tail, gold eyes, and a cutie mark of a blue telescope with a white star. He has a speaking role in the episode For Whom the Sweetie Belle Toils.

In the audio commentary of The Best Night Ever on the DVD My Little Pony Friendship is Magic: Season One Disc 4, Jayson Thiessen refers to Star Gazer as "the Carl Sagan pony" due to his resemblance to scientific author Carl Sagan.

Star Gazer most commonly appears among other high-society Canterlot ponies.

Star Gazer first appears in The Best Night Ever as a guest at the Grand Galloping Gala. Star is one of several chorus singers in At the Gala, and during Pony Pokey, he trips on apples that Applejack puts on the ground in an attempt to sell more of her goods.

In Sweet and Elite, Star Gazer appears several times during Becoming Popular (The Pony Everypony Should Know) and at the Canterlot Garden Party. He attends both wedding ceremonies as well as the reception in A Canterlot Wedding - Part 2.

Star Gazer appears at Fashion Week in Rarity Takes Manehattan, at Appleloosa at the beginning of Pinkie Pride, in Sweetie Belle's dream in For Whom the Sweetie Belle Toils (in which he has a brief speaking role), in the stadium crowd in Equestria Games, at the Crystal Empire in Twilight's Kingdom - Part 1, and again in Appleloosa at the end of Twilight's Kingdom - Part 2.

In Make New Friends but Keep Discord, Star Gazer appears once again as a guest of the Grand Galloping Gala. In Rarity Investigates!, he makes background appearances attending the dinner before Princess Celestia's royal garden opening in Canterlot as Rarity and Rainbow Dash meet Wind Rider and later in a flashback of that event.

In The Point of No Return, Star Gazer appears as a background character, standing beside an unnamed mare in front of the Canterlot Library. In She's All Yak, he appears in sequences featuring other high-class ponies during Fit Right In. In The Last Laugh, he appears in a flashback in the line of Cheese Sandwich's high-class customers attending Kettle Corn's birthday party. 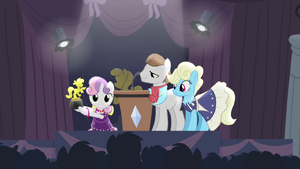