Star Hunter, or Solar Wind, is a male background Pegasus pony with a dark blue coat, blue mane and eyes, and a cutie mark of a white Orion constellation. He is not named in the show, but he is named in merchandise and other media. He shares his mane and tail designs with Twilight Sky, "Cosmic", Neon Lights, Dark Moon, S02E26 Unnamed Unicorn Stallion #1, "Purple Stuff", "Flank Sinatra", and sometimes the unicorn version of Shooting Star. In the episode A Canterlot Wedding - Part 2, he appears as an Earth pony.

Star Hunter makes several appearances throughout the series, usually in episodes in which other Pegasus ponies are also featured.

He first appears, very briefly, in Hearts and Hooves Day during The Perfect Stallion, standing alongside Mane Moon. He later appears in Hurricane Fluttershy as one of the Pegasi enlisted by Rainbow Dash to help transport water to Cloudsdale. As he enters Golden Oak Library, he has an alternate tail design. When the Pegasi have their wing power tested on a racetrack, Star Hunter's wing power is recorded as 11.0, which Rainbow Dash calls impressive.

In Wonderbolts Academy, Star Hunter appears in multiple shots as a Wonderbolts cadet, doing pull ups in one shot. In Games Ponies Play, he appears in Rainbow Dash's flashback when the Equestria Games are announced.

In Tanks for the Memories, Star Hunter leaves the weather factory building for lunch hour.

In No Second Prances, Star Hunter makes a cameo appearance flying across a road in Ponyville.

In It Isn't the Mane Thing About You, Star Hunter makes a background appearance at the Ponyville Marketplace.

In Grannies Gone Wild, Star Hunter appears in Las Pegasus waiting in line for the Wild Blue Yonder roller coaster. In Non-Compete Clause, he makes a background appearance walking down the stairs in the School of Friendship with Lucky Clover.

In My Little Pony Best Gift Ever, Star Hunter appears in the crowd at the Rainbow Falls Hearth's Warming Craft Fair in front of Flim and Flam's stand. After Applejack and Fluttershy expose the Flim Flam brother's scam with Holly the Hearth's Warmer dolls, he and the other customers disperse and later chase Flim and Flam out of Rainbow Falls in an angry mob. He later appears with Cloud Kicker among many other ponies leaving Ponyville Town Hall at night during The True Gift of Gifting.

In A Horse Shoe-In, Star Hunter appears attending Octavia Melody's concert with DJ Pon-3 as a guest performer. In The Last Problem, he appears in a flashback attending Princess Twilight Sparkle's coronation as ruler of Equestria.

Star Hunter is one of many ponies seen in the establishing shot of Ponyville in My Little Pony Equestria Girls: Rainbow Rocks.

Star Hunter is a character in Gameloft's mobile game.

Star Hunter is named in Enterplay's My Little Pony collectible card game. The Gen Con Indy 2013 demo version of his card lists him as "Star Hunter" with a trademark symbol, and the α #19 R version of the card lists him as "Solar Wind". Both versions of the card depict him with his alternate tail design and list his quote "It's kinda embarrassing how many constellations I can name..." 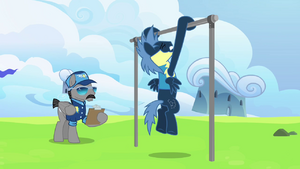