My Little Pony Friendship is Magic Wiki
Register
Don't have an account?
Sign In
Advertisement
in: Pages that need copyediting, Pages that need improvement, Pegasus ponies,
and 6 more

Not to be confused with Sunburst.[1]

Starburst is a male background Pegasus pony with a pale yellow coat, red mane and tail, green eyes, and a cutie mark of a blue five-pointed star. He is unnamed in the series, but he is named in other media.

Starburst first appears in Sonic Rainboom walking through Cloudsdale. He attends the Best Young Flyer competition and watches Rainbow Dash save Rarity and the Wonderbolts by performing a sonic rainboom.

Starburst briefly appears in Luna Eclipsed wearing a Viking helmet for Nightmare Night. He appears later in Hurricane Fluttershy as one of the participating Pegasi to transport water to Cloudsdale.

Starburst appears in the crowd outside the Golden Oak Library complaining to Twilight Sparkle about Pinkie Pie's clones in Too Many Pinkie Pies. He also appears very briefly at the beginning of Sleepless in Ponyville, opening a second-story window as Scootaloo races by on her scooter. In Wonderbolts Academy, Starburst appears as a Wonderbolts cadet, sometimes as a wingpony and other times a lead pony. He also appears in Rainbow Dash's flashback at the beginning of Games Ponies Play.

Starburst appears in front of the Ponyville bowling alley shortly before the bugbear attack in Slice of Life, walks across the screen during a transition during Rules of Rarity in Canterlot Boutique, and witnesses the arrival of Coloratura in The Mane Attraction.

In Newbie Dash, Starburst appears in the audience for Rainbow Dash's first show as a Wonderbolt.

In Celestial Advice, Starburst appears in Princess Celestia's flashback flying over Ponyville Town Hall with Parasol. In Forever Filly, he sits at a table with an unnamed stallion at the ice cream shop.

Starburst appears in a picture with his name listed on pages 70 and 175 of The Wonderbolts Academy Handbook.

One of the original characters featured on the fan-designed WeLoveFine T-shirt "All Dem Ponies" is an Earth pony mare previously referred to as Starburst by designer Samantha Bragg.[3] 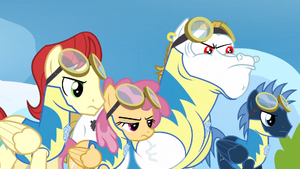