Stare Master is the seventeenth episode of the first season of My Little Pony Friendship is Magic. In this episode, Fluttershy offers to take care of the Cutie Mark Crusaders, but things take a frightening turn when the Crusaders venture into the Everfree Forest. This is the first and only episode in season one where Applejack does not appear, as well as not being with Apple Bloom. The episode's title is a play on the American exercise machine company StairMaster.

The scene when Fluttershy uses the stare against the cockatrice reappears in Memnagerie.

The episode begins with Rarity in her shop trying to complete an order of twenty robes for Trottingham by the following day. Her sister Sweetie Belle tries to help in an attempt to get her cutie mark but just ends up making a mess. Fluttershy soon arrives to drop off Rarity's cat Opalescence from her grooming appointment. Rarity is surprised at how well behaved her cat is, seeing as she couldn't get Opal to behave without getting scratched. She asks Fluttershy if she used "the Stare" on Opalescence, but Fluttershy says it's just due to her being good with animals.

Moments later, Scootaloo and Apple Bloom arrive for their sleepover at Rarity's house. Together with Sweetie Belle, the Cutie Mark Crusaders plan on finding their hidden talents in order to get their cutie marks. Sweetie Belle even made capes with golden underlining for the three to represent the group. Unfortunately, the gold she used was part of a silk cloth Rarity needed to finish her order. Realizing that it's going to take much longer than before, Rarity is forced to cancel her sister's sleepover. Seeing the young fillies disappointed, Fluttershy offers to take care of them. Rarity warns her that her little sister and her friends can be quite a handful, but Fluttershy insists.

In town, Fluttershy runs into Twilight Sparkle, who's off to visit Zecora in the Everfree Forest for some tea. Learning that Fluttershy is going to babysit the three fillies, Twilight wonders if she can handle it.

In Fluttershy's cottage, she asks the Crusaders what they'd like to do first. The fillies suggest going adventuring in the Everfree Forest, but Fluttershy forbids this due to the forest's dangers. The Crusaders try to be "creature catchers," but their roughhousing results in breaking a nearby table. They then try their hoof at carpentry to fix the table, but that doesn't work out so well either. Fluttershy tries to keep them quiet by playing a game of "Shhh!," a game of who can be quiet the longest, but the Crusaders end it immediately by losing on purpose. Before the three's hyperactivity gets out of hand again, Fluttershy sees them to bed, promising they can do more "crusading" in the morning.

The three fillies claim they aren't sleepy yet, so Fluttershy sings them a lullaby. Sweetie Belle recognizes the song, and Fluttershy suggests she sing along, prompting Apple Bloom and Scootaloo to cover their ears. Her version of the lullaby, however, is loud enough to wake up the chickens in a nearby chicken coop. The Cutie Mark Crusaders run out of the house to help rustle the flock back to the coop. In the end, Fluttershy is able to get the chickens back in the coop by giving them an intimidating look.

Fluttershy tucks the Crusaders into bed again, but they're still wide awake. They still want to find their talents, and decide to sneak out of the cottage when they notice that one of the chickens has escaped to the Everfree Forest.

Into the Everfree Forest

"All I needed to do was just show them who's in charge. Nothing's gonna get past Fluttershy! Good with animals, good with kids."
— Fluttershy

Fluttershy is relieved that it's quiet but notices that it's too quiet. She goes to check on the fillies and discovers that they're gone. Looking into the henhouse, she also notices that one of the chickens named Elizabeak is gone too. Seeing hoofprints leading into the Everfree Forest, Fluttershy hesitantly ventures into the forest to find them. While the Crusaders argue amongst themselves, Fluttershy finds Twilight, only to discover that she's been turned to stone. Realizing what this means, she rushes to find the fillies.

Fluttershy finds the Cutie Mark Crusaders looking for the missing Elizabeak. She tells them that a cockatrice, a creature with the head of a chicken and a body of a snake, is on the loose, and warns them not to look one in the eyes. However, they laugh at the silly description before seeing the chicken pass them by. They notice a second chicken hiding in the bushes, one with a long reptilian body: the cockatrice. Its stare causes Elizabeak to turn to stone. The Crusaders panic at the sight of this, and Fluttershy tells them to stand behind her. When she sees how scared the fillies are, Fluttershy confronts the cockatrice face-to-face. She counters the cockatrice's gaze with her own intimidating stare, ordering it to change Elizabeak and Twilight back to normal. As the cockatrice runs away, the Cutie Mark Crusaders, impressed by their babysitter's ability, dub her the "Stare Master." With Twilight and Elizabeak free from the creature's spell, they all return home.

Back at the cottage the next morning, Fluttershy explains to Twilight the events that happened, inspiring her to write another report to Princess Celestia. Fluttershy learns one shouldn't do a task that is more than can be handled.

Rarity then returns, surprised at how well her sister and her friends behave. She tries to get the Crusaders to collect their things to no avail. Fluttershy, however, gets their attention easily, and the Crusaders run inside to get their bags. An impressed Rarity then asks Fluttershy to help her with a new problem with her cat Opal, who is clinging tightly to her body.

Rarity: Did you use... the Stare on her?
Fluttershy: Oh, no! I wouldn't! I couldn't! I-I don't really have any control when it happens. It just happens. Really. I'm just good with animals. It's my special gift, you know.

Scootaloo: We are the Cutie Mark Crusaders!
Apple Bloom: And we wanna crusade for our cutie marks!
Sweetie Belle: And-and-and we, um... Yeah! What they said!

Fluttershy: Now that we've gotten that out of the way, how about a game?
Apple Bloom: A game?
Fluttershy: It's called "Shhh!"
Scootaloo: What's that?
Fluttershy: Well, it's a game about who can be quiet the longest. Sound fun? I'm the world champ, you know. I bet you can't beat me! [squee] [deep breath]
Scootaloo: I lose!
Sweetie Belle: Me too!
Apple Bloom: Me three!

Fluttershy: YOU! Just who do you think you are, going around turning others into stone?
Cockatrice: [dismayed squawk]
Fluttershy: You should be ashamed of yourself! I have half a mind to find your mother and tell her what you've been up to, young man! Now you go over there and turn Elizabeak and my friend Twilight back to normal, and don't ever let me catch you doing this again! Do you understand me? 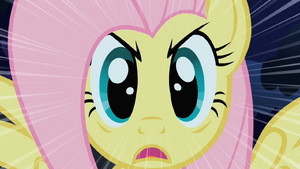