Start a Wiki
watch 00:47
Starlight Glimmer
Do you like this video?

For the character whose placeholder name is "Starlight", see List of Equestria Girls characters#Starlight.

Starlight Glimmer is a female unicorn pony and the main antagonist of the season five premiere. She is the former leader of an unnamed village of equality who seeks to "cutie unmark" everyone in Equestria. She or a similar pony also appears as a background character in My Little Pony: Friends Forever Issue #14.[2]

Starlight Glimmer has a similar color scheme and name to Evening starlite and a similar color scheme to the non-siren forms of Aria Blaze. She has a pink coat, purple and grayish blue mane, and a cutie mark of a star with two glimmering streams (sometimes concealed by a fake equal sign). Part of her real cutie mark is similar to the compass rose cutie mark of "South Pole," of Léon, usually of Prince Blueblood, sometimes of Blue Moon, and in some material of Friends Forever 13 Unnamed Stallion - Doctor. Her name follows the same pattern as Twilight Sparkle, Sunset Shimmer, and Starbeam Twinkle and includes the name of G1 Starlight.

In mid-February 2015, Jim Miller was asked regarding Starlight Glimmer's resemblance to Evening starlite and replied about him having no idea who Evening starlite is and them being not the same as far as he can tell.[3] Later in the same month, he stated that Starlight Glimmer's name is not "Mayor Marx" or variations thereof,[4][5] was asked in reply, "What is it? Or is that still classified?" and replied back, "You'll find out once the episode airs!"[6]

Starlight Glimmer is first presented as the founder and leader of an unnamed, mysterious village in which every resident has given up his or her cutie mark.

As the leader of this village, Starlight has the philosophy that "true friendship" comes from being equal—no more or less talented than another—and that having special talents of any kind only leads to disharmony. To this end, Starlight uses a magical artifact called the Staff of Sameness to remove her followers' cutie marks and replace them with equal signs.

When Twilight Sparkle and her friends arrive at the village, Starlight Glimmer sees this as an opportunity to spread her message of equality to all of Equestria. She leads the Mane Six to a vault of cutie marks outside the village, where she takes their cutie marks from them with the Staff of Sameness and tries to convert them over to her way of thinking. Fluttershy, the only one among Twilight's friends who appears to convert, spies on Starlight and discovers that her own equal sign cutie mark is actually makeup.

Using a bucket of water, Fluttershy and her friends expose Starlight's secret to her followers. It is also revealed that the Staff of Sameness's ability to remove cutie marks is Starlight's own magic and that the staff is an ordinary piece of wood. She attempts to leave with the Mane Six's cutie marks but is thwarted by her former followers. Upon emerging from the avalanche, an angered Starlight attempts to "cutie unmark" her former followers, but is stopped by Twilight, much to her surprise. Having lost her followers' faith, Starlight retreats from the village and escapes to parts unknown.

When initially introduced, Starlight Glimmer is shown to be openly friendly and welcoming, both toward the Mane Six and her followers. She is also somewhat of a disciplinarian, issuing punishment to those who do not conform to her philosophies. However, she later adopts a more callous and ill-tempered persona, desperate to keep up appearances and dismissing any concept of friendship that isn't the same as her own.

Starlight Glimmer is shown to be very skilled in using magic and mentions that she has studied her spell for years. She wields an ordinary wooden staff called the Staff of Sameness while casting this spell in a ceremony known by her followers as "cutie unmarking," pretending this to be the staff's power instead of her own. She is also able to use telekinesis at long range, project magical barriers, teleport, and shoot powerful magic blasts.

In the IDW comics' My Little Pony: Friends Forever Issue #14 page 21, one of the ponies at Fillydelphia at least has a horn and coat and mane colors similar to those of Starlight Glimmer[2] and Evening starlite.

A Playful Ponies brushable toy of Starlight Glimmer, with her real cutie mark, has been displayed at the 2015 American International Toy Fair.[8]

"Please enjoy our little corner of Equestria. We're all quite fond of it. No doubt you will be as well."
— The Cutie Map - Part 1

"When the rest of Equestria sees that a princess gave up her cutie mark to join us, they'll finally understand what we're trying to accomplish."
— The Cutie Map - Part 1

"In sameness, there is peace. Exceptionalism is a lie. Free yourself from your cutie mark. Choose equality as your special talent. Difference is frustration. To excel is to fail. Be your best by never being your best. Conformity will set you free. Accept your limitations, and happiness will follow. You're no better than your friend."
— The Cutie Map - Part 2

"They think they can come into my village and disrupt my life? Let's see how they like spending the rest of their lives without their precious cutie marks!"
— The Cutie Map - Part 2

"Spare me your sentimental nonsense! I gave these ponies real friendships they never could have had otherwise!"
— The Cutie Map - Part 2 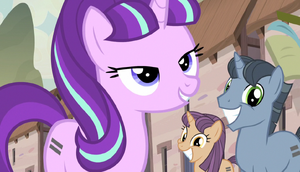 Retrieved from "https://mlp.fandom.com/wiki/Starlight_Glimmer?oldid=1399737"
Community content is available under CC-BY-SA unless otherwise noted.