Starry Eyes is a male background Pegasus pony with a white coat, two-tone black mane and tail, gold eyes, and a cutie mark of a telescope. He is unnamed in the show, but he is named in merchandise.

He is similar to Starry Eyed both in name and in telescope association.

Starry Eyes first appears in the season two episode Hurricane Fluttershy. He is one of the Pegasi attending the meeting at the Golden Oaks Library for instructions to lift water up to Cloudsdale—though he is not seen taking part in any training or flying.

Starry Eyes makes a more prominent appearance in the season three episode Wonderbolts Academy, in which he is a Wonderbolts cadet among Rainbow Dash, Lightning Dust, and other Pegasi, and he is paired with Meadow Flower as her wingpony. At one point during training, Rainbow Dash and Lightning Dust fly past him and Meadow Flower on the obstacle course and cause them to spin out into the other cadets.

During the cloud-busting portion of cadet training, when Rainbow Dash and Lightning Dust's tornado causes Twilight Sparkle and her friends to fall to their doom, Starry Eyes rescues Applejack. He is last seen saluting to Rainbow Dash and following her lead.

Starry Eyes watches the goof-off between Pinkie Pie and Cheese Sandwich, and he appears at the Rainbow Falls Traders Exchange in Trade Ya!, purchasing an oatburger.

In The Cart Before the Ponies, Starry Eyes appears as a background character spectating the first Ponyville Applewood Derby during Derby Racers. In Top Bolt, he makes another background appearance at the Wonderbolt Academy.

In A Flurry of Emotions, Starry Eyes appears attending Spearhead's pop-up art show at the Ponyville Café. In Rock Solid Friendship, he makes a background appearance standing at a honey stand at the Ponyville marketplace. In Forever Filly, the Cutie Mark Crusaders pass by him while riding down a hill on a large stone block, accidentally giving him an afro, which he appears to like. In Parental Glideance, he attends a ribbon-cutting ceremony in Canterlot hosted by the Wonderbolts. In A Royal Problem, he makes a background appearance in Canterlot among many ponies with uneasy facial expression watching Princess Luna awkwardly ride on a chariot while performing Princess Celestia's royal duties.

In The Break Up Break Down, Starry Eyes is seen twice with "Cotton Sky" during Hearts and Hooves Day when Spike and Discord stroll through Ponyville during both the daytime and at night.

In the special My Little Pony Best Gift Ever, Starry Eyes appears in the crowd of ponies at the Rainbow Falls Hearth's Warming Craft Fair at Flim and Flam' stand, eager to buy a Holly the Hearth's Warmer toy. When Applejack and Fluttershy convince the crowd to "put more thought into getting the right gift for each pony", he and the crowd chase the brothers out of Rainbow Falls.

Starry Eyes spectates Quibble Pants play an exhibition game of buckball against Team Ponyville in Common Ground during a buckball tournament in Appleloosa, and cheers for Ponyville when Quibble Pants scores against his own team. In The Last Crusade, he attends the Cutie Mark Crusader Appreciation Day in front of Ponyville Town Hall, sporting an afro. In Between Dark and Dawn, he faints while flying upon noticing Princess Celestia and Princess Luna hiking outside Canterlot. In A Horse Shoe-In, he appears in the audience for Octavia Melody's Concert with DJ Pon-3.

Starry Eyes is named with a trademark symbol in a Hasbro toy release.​[​specify​]​

Starry Eyes appears with green eyes on page 67 of Little, Brown's My Little Pony Friendship is Magic official guidebook My Little Pony: The Elements of Harmony.

Starry Eyes was first named on his Enterplay collectible card game Canterlot Nights expansion set card #63 C, which shows him with gold eyes and gives him the description "Founder of the Ponyville Amateur Astronomers League, Starry Eyes is rarely seen far from his telescope." 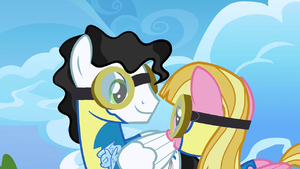