Stellar Eclipse is a male Pegasus who appears in Trade Ya! He has a milk chocolate brown coat, black and purple striped mane and tail, purple eyes, and a cutie mark of usually a sun symbol consisting of a pink circle surrounded by eight triangles; four large, purple ones, and four small, light pink ones -- in one shot, his cutie mark appears as an hourglass. He walks with a wheelchair cart.

Unlike the wheelchairs used by Twilight Sparkle in Feeling Pinkie Keen, by Mr. Mousey in A Bird in the Hoof, by Rainbow Dash in Read It and Weep and Rainbow Falls, by "Jinx" and "Theodore Donald "Donny" Kerabatsos" in Leap of Faith, by a colt in My Little Pony: Friendship is Magic Issue #29, by Granny Smith on My Little Pony: Friends Forever Issue #27's SUB cover, by Agnes Garbowska's pony, Issue 60 Unnamed Filly - Winged Binoculars, and Issue 60 Unnamed Filly - ​[​specify​]​ in My Little Pony: Ponyville Mysteries Issue #1, and by Sludge in Father Knows Beast, Stellar Eclipse's wheelchair cart is similar to Walkin' Wheels.

After speaking to a dealer of ancient beasts about trading an Orthros for a lamp, Rainbow Dash and Fluttershy approach Stellar Eclipse in hopes of trading one of his lamps for Rainbow's rusty horseshoe. Stellar says no to the unfair trade but agrees to trade a lamp for an antique chicken.

"No. But I'd trade it for an antique chicken."
— To Rainbow Dash in Trade Ya!

"Sorry, girls. Been trading all day. My belly's tellin' me it's time to eat an oat burger."
— To Fluttershy and Rainbow Dash in Trade Ya! 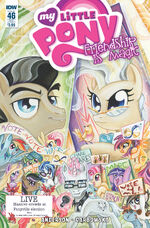