Steven Magnet is a male sea serpent who first appears in the episode Friendship is Magic, part 2. He was first named in merchandise, and later named in the season five episode Slice of Life, in which he is credited as "Stephen Magnet".

Lee Tockar's playing of Steven Magnet as "fabulous" was instructed by voice director Terry Klassen.[2] According to writer M.A. Larson, Steven Magnet was to have sung in one of the songs cut from Magical Mystery Cure for time, which would have featured "him and then, like, a bunch of other" dragons similarly to in Fantasia's Dance of the Hours.[4] In early June 2012, Larson was asked "Best joke/line/visual that you didn't write in any of your episodes?" and answered "I absolutely LOVE the sea monster in the pilots. I always wanted to bring that guy back but tough to do organically."[5] In late June 2012, Jayson Thiessen, M.A. Larson, and Meghan McCarthy were asked "What was the *sea serpent* doing in a river? There an ocean after Everfree?" and Larson answered "river serpent, obviously."[6]

Steven Magnet's name does not appear in Friendship is Magic, part 2's script.[2] Before his name was made official, it was assigned by fans after an inaccurate YouTube auto-generated caption piece[7] of Rarity's dialogue, and Wendy Epstein relayed through Equestria Daily in 2012 regarding Enterplay trading card series 1 card #34 "We knew we wanted to include Steven Magnet on account of his unusual fan following, but were fairly sure Hasbro wouldn't jump for the fan name; hence why we pitched him as 'Sea Serpent'. The description lulls you into believing it is straight from the show...but then: 'A magnetic personality'? How did that get there? Oh yeah, bronies." Contrary to expectation,[8] the name was indeed adopted by Hasbro, revealed at the 2013 American International Toy Fair.[9]

In the season one episode Friendship is Magic, part 2, Steven Magnet is one of the obstacles that the Mane Six face in their quest for the Elements of Harmony. Nightmare Moon has cut off half of his mustache, sending him into a tantrum that renders an Everfree Forest river impassable. Rarity soothes his tantrum by sacrificing her tail to make up the rest of his cut mustache with her unicorn magic. In thanks, Steven Magnet offers his body as a bridge across the river.

Steven Magnet tells Matilda in the season five episode Slice of Life that he is Cranky Doodle Donkey's "best beast" and that they have shared many adventures together. Matilda is stunned by this revelation, having not known that Cranky's best friend is a sea serpent. Steven tells her in his flamboyant style that Cranky had only her in mind in all of their adventures. During the wedding ceremony, Steven snips off a piece of his mustache with one of his scales to create a makeshift wig for Cranky, and cries as the couple say their vows.

Steven Magnet is also mentioned indirectly by Applejack in the season seven episode It Isn't the Mane Thing About You.

In the Better Together short The Salty Sails, Steven Magnet is depicted on a map Twilight uses to navigate the sea.

In Fundamentals of Magic, he appears in episode 2, "Magical Creatures".

Steven Magnet appears in the toy line. His miniature collectible, with his repaired mustache, is named Steven Magnet with a trademark symbol in the deluxe Elements of Harmony Friends character collection set with Rarity, Fluttershy, Manny Roar, and Nightmare Moon. The packaging shows him with his cut-off mustache and gives the description "RARITY® shows generosity to the sea serpent, and FLUTTERSHY® shows kindness to the manticore. These Elements of Harmony help defeat NIGHTMARE MOON™!"

Steven Magnet appears in books. In The Elements of Harmony, he is shown with his repaired mustache, and he is given the description "STEVEN MAGNET, the sea serpent of the river, is quite a testy fellow. When Nightmare Moon cut off part of his mustache, he went into a tizzy. Thankfully, Rarity used her magic to solve the problem, and in return the sea serpent offered himself as a much-needed bridge to the other side." In Mini Pony Collector's Guide, he is listed, and his mini-figure toy is shown. In Welcome to the Everfree Forest!, he is shown in images from Friendship is Magic, part 2, and "The Dark That Lurks Inside the Everfree Forest By Rarity" includes "I did meet that lovely sea serpent, Steven Magnet, in the Forest. He was swimming in the river, howling about his mustache. Someone had rudely cut half of it off, poor thing!"[11]

Steven Magnet appears on apparel. Of the "MLP Season One Allover" WeLoveFine T-shirt, the back shows him with his repaired mustache.

"I was just sitting here, minding my own business, when this tacky little cloud of purple smoke just whisked past me and tore half of my beloved mustache clean off, and now I look simply horrid."
— Friendship is Magic, part 2

"Oh-hohohoho! My mustache! How wonderful!"
— Friendship is Magic, part 2

"All these ponies traveling to Ponyville, putting on uncomfortable clothes, sitting through a long ceremony, you think any of them care about the marriage? [laughing] Honey, the wedding is everything."
— Slice of Life

"What a world! What a world, where I can’t have a Cutie Mark to go with my magnificent mustache!"
— My Little Pony Facebook post[1]

"Come on boys, let's bring it on home."
— M.A. Larson's recollection of the ending to a song cut from Magical Mystery Cure[4] 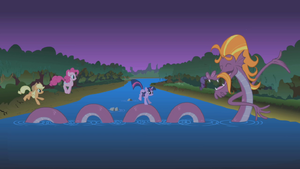