Stranger Than Fan Fiction is the thirteenth episode of season six of My Little Pony Friendship is Magic and the one hundred and thirtieth overall. The title is a reference to the saying "truth is stranger than fiction" and fan fiction, an in-universe example of the latter of which is Untitled Mare Do Well fanfiction.

In this episode, Rainbow Dash attends a Daring Do Convention and meets Quibble Pants, who hates Daring Do's post-book three stories as much as she loves them.

In production order, this is season six episode fourteen.

This episode was initially teased by Daring Do voice actress Chiara Zanni in a direct message on Twitter in August 2015.[1]

On July 13, 2016, Entertainment Weekly revealed that stand-up comedian Patton Oswalt would be providing the voice of Quibble Pants.[3] Oswalt himself later confirmed the reveal on Twitter, adding that the episode has a Wes Anderson Easter egg.[4]

The episode was released eight hours early on the U.S. and Canadian Netflix service.

The co-writer of the episode Michael Vogel revealed that Quibble Pants's monologue during the episode's end credits was all improvised by Oswalt.[5] Also according to Vogel, this episode was originally envisioned as a Discord episode based on Oswalt's comedy routine "Rats".[6]

The episode begins with Daring Do braving an underground temple's hazards to claim a rare artifact. This is revealed to a Daring Do story being read to Rainbow Dash by Twilight Sparkle while Rainbow packs up for the Daring Do Convention in Manehattan. Twilight is upset that she is unable to attend the convention due to an upcoming friendship summit in Griffonstone, but Rainbow promises to get A.K. Yearling to sign her book for her.

Rainbow tries to downplay her excitement for the convention in front of Twilight, but she is overcome with excitement as soon as she arrives.

The Daring Do Convention

As Rainbow Dash wanders through the convention, a salespony briefly tries to sell her on the Daring Do Experience "adventu-cation", but she declines, having already done it. Afterward, she meets a pony named Quibble Pants, who shares her fanatical passion for Daring Do. The two spend some time exploring the convention together and checking out various booths and activities.

During lunch, Rainbow suggests they check out convention activities relating to the Daring Do books that were released after the initial trilogy. Quibble refuses, however, claiming that the later books in the series are "dumbed down" and unrealistic. This leads to a heated argument between Rainbow and Quibble regarding the quality and realism of A.K. Yearling's subsequent writing, and Rainbow is unable to properly defend her points without revealing that Daring Do is a real pony.

Unable to come to an agreement on the matter, the two decide that they cannot be friends and part ways.

The Amulet of Culiacan

At the hotel near the convention, Rainbow Dash searches for A.K. Yearling so she can prove to Quibble Pants that the Daring Do books are indeed realistic. When she meets with Yearling claiming to have an "emergency", Yearling pulls her into a hotel room, believing that Dr. Caballeron is somewhere at the convention. Yearling dismisses Rainbow's fan interests as she is more concerned with a key-shaped artifact she recently came into possession of and finding a lost treasure before Caballeron does.

Discarding her A.K. Yearling persona, Daring Do asks Rainbow Dash to keep a lookout for suspicious activity around the convention hall. As Rainbow returns to the convention, Dr. Caballeron lurks close by, blending in with cosplayers as he searches for Daring Do. Rainbow once again bumps into Quibble Pants, who continues to voice his distaste for the later Daring Do books.

As Rainbow follows Caballeron and Quibble Pants follows her, Caballeron's henchponies overhear them talking about Daring Do's artifact and capture them.

After the henchponies bind Rainbow and Quibble in chains, Quibble uses his intricate Daring Do savvy to lure the henchponies away and free himself and Rainbow. However, he still refuses to acknowledge that anything happening around him is real. Rainbow guides Quibble through the treacherous jungle, and it is only after Quibble nearly falls into raging rapids that he realizes his life is in genuine danger. Unfortunately, Caballeron and his henchponies quickly catch up with them, and through their unwitting help, Caballeron discovers the lost temple he had been searching for.

Caballeron and his henchponies drag Rainbow and Quibble into the temple, and Quibble still believes everything happening around him to be a performance. As he continues to voice his cynicism, he inadvertently triggers some traps that releases a monstrous Cipactli and slowly fills the temple chamber with mud. Once he is face-to-face with the Cipactli, Quibble comes to a frightening realization:

"This is real!"
— Quibble Pants

Rainbow, Quibble, and Daring Do find themselves in a chamber with seven doors, behind only one of which lies the treasure. With Quibble Pants' cynical help, Daring Do opens the correct door with her key-shaped artifact and claims the temple's treasure. However, as mud starts to fill the room, the temple entrance is sealed off and the Cipactli slowly closes in.

Using a vine to pull Quibble Pants along, Rainbow and Daring Do avoid the Cipactli and escape the temple through an open skylight. Once the three are outside the temple, they elude Caballeron and his henchponies by having the Cipactli chase them off.

Daring Do thanks both Rainbow Dash and Quibble Pants for their help and flies off to bring the temple treasure to a museum.

As Rainbow and Quibble return to civilization, Quibble admits that the later Daring Do books are more realistic than he realized, but he still does not like them. Before Rainbow can argue with him again, Quibble says he figured something out. While he prefers the intelligent and puzzle-solving Daring Do of the original trilogy and Rainbow prefers the brave and unbeatable Daring Do of the later books, it is okay for them to like the series in their own way, and neither of them are at fault for their personal preferences.

Quibble also compliments Rainbow Dash for the bravery and awesomeness she demonstrated during their adventure. Rainbow returns the sentiment, complimenting Quibble for his perception and puzzle-solving skills. As they leave the jungle as friends, Quibble goes on an extended ramble about his Daring Do fan fiction that continues over the end credits.

Salespony: You look like a pony who'd be up for an all-inclusive one-of-a-kind adventu-cation, where you can get to live the Daring Do experience!
Rainbow Dash: No thanks. Did that already.

Quibble Pants: Right. We're actually being held captive by Caballeron. Please! This guy's accent is all over the place! No offense.
Dr. Caballeron: I...

Quibble Pants: If this were really a real Daring Do adventure, I'm sure I'd step on the wrong plank at exactly the wrong—
[wood crunches]
Quibble Pants: Whoa!
Rainbow Dash: [straining]
Quibble Pants: [sighs] Good thing this is all just a pretend adventure. Least we know all of this struggling won't make the bridge fall apart.
[snap]
Quibble Pants: You need to get your money back.

Quibble Pants: Listen, buddy, I don't take orders from some second-rate performer who learned acting from the Supervillain School of Bad Accents! The only thing this mess is missing is some giant Ahuizotl wannabe monster, and I have a feeling that would be too much for you bargain-basement adventurers to pull off!
[mud dripping]
Quibble Pants: Huh?
Cipactli: [roars]
Quibble Pants: Um... you're real. This is real. This is real!

Quibble Pants: Uh, do you think A. K. Yearling would consider letting me write the next book? I... I think I can make things way clearer. I mean, for instance, in the second adventure...
[Quibble continues talking over credits]
Quibble Pants: ...there's a side character. I don't want to kind of name it right now, because it's sort of this thing that I've already written a lot of fan fiction on. I don't want you to... Not that I'm saying that you would steal it! But I am saying this would totally go along my whole thing about puzzle-solving, except what if each puzzle that was solved unlocked a new karate move? Think of it that way, right? And I mean I'm kind of a "Yearlite" myself, so I'm sure she'd be open to—
Rainbow Dash: Uh... Quibble?
Quibble Pants: Sorry! 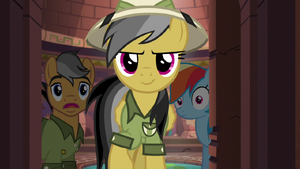