Strawberry Ice is a female Earth pony with a light blue coat, two-tone pink mane and tail, light pink eyes, and a cutie mark of two yellow bows. She is unnamed in the show, but she is named in merchandise. She has speaking roles in Made in Manehattan and Fake It 'Til You Make It.

Strawberry Ice later appears in Trade Ya! when Pinkie Pie auctions off Princess Twilight Sparkle's books at the Rainbow Falls Traders Exchange. She also appears three times in Equestria Games spectating the titular event at the Crystal Empire as Tirek and Discord drain unicorns of their magic at an auditorium in Twilight's Kingdom - Part 1.

Strawberry Ice appears during a party in Our Town at the end of The Cutie Map - Part 2. She also appears at Pinkie Pie's friendship party at the end of Party Pooped and several times in Manehattan in the episode Made in Manehattan, appearing as a Pegasus at one point and having a speaking role at another.

Strawberry Ice appears multiple times in Manehattan The Gift of the Maud Pie, attends the grand opening of Rarity For You in The Saddle Row Review, and appears at Gladmane's Las Pegasus resort in Viva Las Pegasus.

Strawberry Ice briefly appears in Manehattan in Fame and Misfortune and at Mr. Breezy's store in It Isn't the Mane Thing About You.

Strawberry Ice has a brief speaking role in Fake It 'Til You Make It, walking in Manehattan with Luckette and getting knocked over by Rarity when she runs by them before later shopping at Rarity For You. In Grannies Gone Wild, she makes a background appearance riding in a Ferris wheel at a Las Pegasus resort with an unnamed mare and later sitting with an unnamed stallion at a table in DJ Pon-3's dance club.

In Between Dark and Dawn, she appears during the Lotta Little Things reprise at an art museum reading a brochure beside Princess Celestia as she falls asleep on her. She then takes a selfie with her. In Daring Doubt, she appears at Groom Q. Q. Martingale's book signing at a bookstore in Manehattan. In The Last Problem, she makes a background appearance in future Ponyville on the second story balcony of Ponyville Town Hall during The Magic of Friendship Grows.

Strawberry Ice is depicted with the same design as Applejack and named in the twentieth wave of mystery pack toys and collector cards, which lists her name with a trademark symbol and states that she and Berry Preppy "like the same fashions."

"Ah, get outta my way!"
— Made in Manehattan 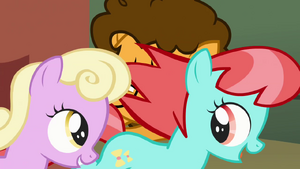