Strawberry Sunrise is first seen wingless in Hearth's Warming Eve cheering in the crowd right before The Heart Carol. She first appears as a Pegasus in Hurricane Fluttershy after Rainbow Dash tests Twilight Sparkle's anemometer. She is later seen as a spectator during the Equestria Games in the episode of the same name standing next to Luckette.

In the season seven episode Honest Apple, Strawberry Sunrise has a speaking role in which she expresses an extreme distaste for apples (to Applejack's outrage).

Strawberry Sunrise appears in a picture with her name listed on My Little Pony: Friends Forever Issue #18's regular cover.

In Enterplay's collectible card game, Strawberry Sunrise is named "Sweetie Sunrise" on her card α #20 C, which attributes to Berry Punch the quote "I don't know about you, but it takes more than a cup of orange juice to get ME going in the morning." In the game's expansion set Friends Forever, Strawberry Sunrise's name is listed with a trademark symbol on her card #77 U, which lists the quote "Some days I wish Princess Celestia would raise the sun earlier."

"Only if, by 'better', you mean 'better at being disgusting'."
— Honest Apple 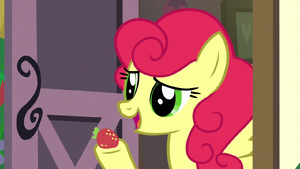 Retrieved from "https://mlp.fandom.com/wiki/Strawberry_Sunrise?oldid=2109908"
Community content is available under CC-BY-SA unless otherwise noted.