Student Counsel is the eleventh episode of season nine of My Little Pony Friendship is Magic and the show's two hundred and seventh episode overall.[1] The title is a wordplay on "student council".

Starlight Glimmer relishes her role as school counselor and encourages the students to come to her anytime about anything, but always being available becomes too much for her.

This episode aired on May 20, 2019, on Cartoonito in Italy, nineteen days ahead of its scheduled premiere on Discovery Family.[2]

The episode begins on a hilltop near Ponyville; Trixie puts together a picnic for herself and Starlight Glimmer as a way for Starlight to relax from her hard work as guidance counselor at the School of Friendship. Though Starlight is touched by Trixie's gesture, she is frequently pulled away by a hoof bracelet she magically enchanted to glow whenever someone knocks on her office door at the school. Trixie is frustrated from Starlight being called away to her office so often, preventing them from spending much time together.

Later, in her office, Starlight helps Silverstream not only with an upcoming visit by her relatives from Seaquestria but also her research assignment on dangerous creatures of the Everfree Forest. As Starlight quickly wraps up her session with Silverstream, Trixie enters the office ahead of the next student in line to remind Starlight about the party Maud Pie and Mudbriar are throwing for the spring solstice. However, Starlight is very preoccupied with seeing all the students who wish to see her before they leave for spring break.

Starlight and Trixie head into town to complete a to-do list for Maud and Mudbriar's party, including learning a special cake recipe from Mrs. Cake together. Starlight suggests they split the party-planning duties to save time, but she is so split between helping Trixie and helping her students that she is unable to properly focus on either task. As it starts to get late in the day, Starlight finally goes to Sugarcube Corner to learn Mrs. Cake's special cake recipe with Trixie, but Mrs. Cake says she already taught the recipe to Trixie, much to Starlight's sad disappointment.

Upon returning to her office, Starlight finds Trixie waiting for her and apologizes for neglecting their friendship all day. When Silverstream enters with yet another problem to talk with Starlight about, Starlight decides not to ignore her friends anymore. She declares the counselor's office closed and tells Silverstream to go home for spring break and figure her problem out on her own.

Later that evening, Starlight and Trixie go to Maud and Mudbriar's solstice party, held in Maud's cavern home and with Sunburst also in attendance. With the School of Friendship closed for spring break, Trixie looks forward to finally being able to spend time with Starlight without interruption. Unfortunately, Silverstream's younger brother Terramar suddenly arrives in a panic and informs Starlight that Silverstream never arrived home when expected. With their parents leading search parties between Ponyville and Mount Aris, Terramar has come to check the school.

When Trixie mentions that Starlight dismissed Silverstream from her office shortly before she went missing, Terramar criticizes Starlight's ability as a counselor. Despite Trixie standing up for her, Starlight feels responsible for causing Silverstream to go missing and offers to help Terramar look for her. Their search around the school leads them to Silverstream's dorm room, where she had been researching cockatrices for her research assignment, and they theorize she went into the Everfree Forest to look for the creatures.

The search for Silverstream

Outside the school, Starlight and Terramar meet up with Trixie, Sunburst, Maud, and Mudbriar, who have put the solstice party aside to help with the search. When Starlight mentions that Silverstream possibly went into the Everfree Forest to look for cockatrices, Trixie leads the search party into the forest, but she quickly gets the group lost and going around in circles. Using Silverstream's research notes and Mudbriar's knowledge of shade trees, the group eventually finds an entire colony of cockatrices in the middle of a mass migration, but Silverstream is nowhere to be found.

When the cockatrices discover their presence and attack, the group splits up and keeps their eyes covered to avoid being turned to stone. Starlight teleports her friends to safety one-by-one, but Mudbriar gets turned to stone. When the cockatrices chase them, they flee toward the Castle of the Two Sisters. Upon taking shelter inside the castle doors, the group worries about Silverstream and her still-unknown whereabouts, and Starlight feels even more responsible for her going missing.

Just then, Trixie notices the crystal treehouse that the Young Six grew from the Tree of Harmony's remains. Inside the treehouse, the group finds Silverstream finishing her research project with the help of a cockatrice named Edith. Having taken Starlight's advice from earlier, Silverstream wanted to finish her assignment before going home for spring break, and she apologizes for causing everyone to worry.

Back at Maud's home, Mudbriar is turned back to normal, and Terramar thanks Starlight for helping find Silverstream. Starlight still feels like she abandoned Silverstream and failed in her duties as counselor, but her friends tell her that she cannot completely devote herself to her students or else she risks neglecting her friends (and vice-versa). Starlight decides to set a schedule for students to see her at specific times during the day, and Silverstream agrees to only see Starlight for truly important matters.

With that, Starlight and her friends go back to celebrating Maud's spring solstice party.

Starlight Glimmer: The Great and Powerful Trixie might keep her promises, but the Busy and Distracted Starlight sure doesn't.

Terramar: What kind of counselor turns away a student with a problem?!
Trixie: The kind with too much on her plate! Starlight has always gone out of her way for her students. And I mean always.

Maud Pie: [deadpan] I should've known it couldn't last. Party perfection is more of a Pinkie thing.
Mudbriar: Mm. I wasn't going to say anything, but these flowers are just glued on, so technically, it wasn't perfect already.

Maud Pie: [deadpan] We can still have a party. A search party.

Trixie: I have a lot of experience telling ponies that I have experience with the dangerous creatures of Everfree Forest! Follow me!

Sunburst: Mudbriar's been turned to stone?!
Maud Pie: [deadpan] I didn't think I could love him any more.

Starlight Glimmer: If I hadn't galloped off to a holiday celebration, Silverstream would be safe with her family, and you'd all be enjoying Maud's party! Instead, my student is missing, we're surrounded by a flock of petrifying chicken-snakes, and Maud's boyfriend was turned into a hunk of rock!
Maud Pie: [deadpan] You got the "hunk" part right.

Silverstream: I'm sorry you got turned to stone looking for me. But I'm glad Edith was able to turn you back.
Sunburst: [hushed, to Trixie] How do you tell the difference?
Maud Pie: [deadpan] I have mixed feelings about it.

Sunburst: You can't be expected to supervise your students every second of every day.
Starlight Glimmer: I'm not so sure.
Silverstream: I like that you're always available, but it kind of makes it okay to come to you with stuff that maybe isn't super important.
Trixie: Of course being a school counselor is a big responsibility. But always being at work isn't fair to anypony. Especially me.
Starlight Glimmer: Do you think if I had set times to see me, it might help you decide what you really need to talk about?
Silverstream: To be honest, you really weren't very helpful with the other stuff anyway.
Starlight Glimmer: Yeah— Wait, what?! 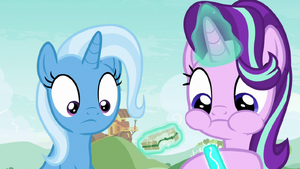