Stygian, also known as the Pony of Shadows, is a male unicorn and the antagonist of the season seven finale Shadow Play. He is a battle strategist and friend of the Pillars of Old Equestria who turned into an evil pony of darkness. His alter ego is first mentioned in Castle Mane-ia and depicted in My Little Pony: Friendship is Magic Issue #53.

The word "stygian" means "dark and gloomy" and also relates to the river and deity Styx of Greek mythology.

The Pony of Shadows is first mentioned in a ghost story told by Applejack in the season four episode Castle Mane-ia. According to Applejack, when Nightmare Moon was banished to the moon, traces of her dark magic stayed behind. When night falls on the Castle of the Two Sisters, that dark magic takes the form of the Pony of Shadows.

In the season seven finale Shadow Play - Part 1, the Pony of Shadows is revealed to be a real figure from Equestrian history. As recorded in the lost journal of Star Swirl the Bearded, the Pony of Shadows was originally a normal pony who brought the Pillars of Old Equestria together to save the land from a great evil. However, the pony soon became jealous of the Pillars' power and glory, and he stole artifacts from them in a quest for power, resulting in his exile. The resentful pony thus turned to darkness for revenge and transformed into the Pony of Shadows. In order to stop him, the Pillars sealed him in limbo along with themselves. A thousand years later, Twilight Sparkle and her friends inadvertently release the Pony of Shadows from limbo when they free the Pillars.

In Part 2, the Pony of Shadows—weak from his time in captivity—escapes to regain his strength from the darkest corners of Equestria. The Pillars eventually reveal the beast's true identity as their former friend Stygian, a young scholar who gathered them all together to defend the realm and worked alongside them as a battle strategist until he stole their artifacts and transformed into a wicked creature of darkness.

The Mane Six and Pillars eventually track down the Pony of Shadows to the Hollow Shades. Before the ponies can banish him to limbo again, Twilight and Starlight Glimmer reach out to the real Stygian inside the beast's body. Stygian reveals that he never wanted to steal from the Pillars; he wanted to make copies of their artifacts so he could fight alongside them in battle. The Pillars realize their grave mistake, and together with the Mane Six, they free Stygian from the darkness and banish the darkness to limbo with the Elements of Harmony. Star Swirl apologizes to Stygian for letting pride cloud his judgment, and Stygian remains in the present era with the Pillars.

In season eight, Star Swirl alludes to Stygian in Friendship University, citing the misunderstanding between them as reason for Twilight to give Flim and Flam the benefit of the doubt. In A Rockhoof and a Hard Place, Stygian is mentioned as having become a best-selling author, writing at least three stories about his past experiences.

In season nine, the Pony of Shadows is mentioned in The Beginning of the End - Part 1 as one of the challenges Twilight and her friends have overcome.

Stygian is first alluded to in the My Little Pony: Friendship is Magic Issues #51-53 story arc From the Shadows by his descendant Shadow Lock, who seeks to erase all evidence of his ancestor's existence in order to prevent his return. Stygian is also depicted as the Pony of Shadows in Star Swirl's journal on Issue #53 page 20. He also appears on the A cover of Issue #88.

Stygian also appears on My Little Pony: Legends of Magic Issue #7 cover B with the Pillars of Old Equestria. In the story's flashback, his village comes under the Dazzlings' hypnotic control, and he leaves to gather together a group of legendary heroes strong enough to fight them. In Issue #8, Stygian successfully recruits Rockhoof after helping him protect his village from ferocious lumber bears. In Issue #9, they recruit Mage Meadowbrook after helping her cure rabid swamp animals. In Issue #10, the group is joined by Flash Magnus and Somnambula, and in Issue #11 by Mistmane and Star Swirl the Bearded. In Issue #12, the group defeats and banishes the Sirens, and Stygian also appears in the present day talking with Sunburst.

In the Legends of Magic Annual 2018 comic, Stygian and the Pillars of Equestria travel to another world to rescue Princess Celestia and Princess Luna. In this other world, they battle against an alternate Pony of Shadows, who is eventually revealed (to the reader) to be that world's version of Stygian.

Stygian appears as a central character in the My Little Pony: Nightmare Knights series, helping a depowered Princess Luna to assemble a team of former villains. His alternate self also makes a return appearance in a nightmare, with Princess Eris using its form as a disguise. It is later revealed that the alternate Stygian enslaved Eris, but was later defeated by her and an alternate Daybreaker.

In My Little Pony: Friendship is Magic Issue #89, Stygian appears on page 3.

Stygian is seen at the end of My Little Pony: Friendship is Magic Issue #100, researching the temples containing the other Trees of Harmony alongside Twilight, Starlight, Sunburst and Star Swirl. On Issue #101 page 3, he and Sunburst try to find information on the Knights of Harmony with the aid of Somnambula. In Issue #102, Stygian fights against the Knights alongside Princess Cadance and Maud Pie.

In chapter 11 of Discord and the Ponyville Players Dramarama, Torch Song of the Pony Tones mentions the Pony of Shadows.

Stygian appears in episode 5 of Fundamentals of Magic, "When Magic Goes Wrong".

"You summon me at your peril, Star Swirl! Once I defeat all of you, this realm will embrace the darkness as I did so long ago!"
— Shadow Play - Part 1

"Drawing me here will only make me stronger. You will never defeat me!"
— Shadow Play - Part 1

"Don't fret. When I extinguish the light and hope of this miserable world, you won't remember any of this."
— To Twilight Sparkle, Shadow Play - Part 2

"Your days of glory are through, Star Swirl. Now my dark power will reign, and you six will bow to me!"
— Shadow Play - Part 2

"When you turned your backs on me, I discovered this place. The darkness spoke to me of a power beyond any I could imagine, and I listened. The shadow and I became one. Soon, all of the realm will be the same. Then all ponies will feel the despair I did when you cast me out!"
— Shadow Play - Part 2

"The darkness welcomed me when no pony would, and I will do what I must to protect it!"
— Shadow Play - Part 2

"This is a tale of the heroes of Equestria. However, there is one very important thing to remember about me. I am not a hero."
— My Little Pony: Legends of Magic Issue #7

"I was the Pony of Shadows. I threatened to destroy my heroic friends and cause the whole of my world to descend into darkness and corruption."
— My Little Pony: Nightmare Knights Issue #1 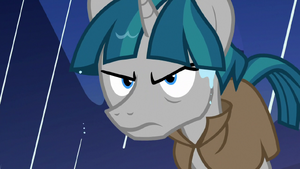