Sugar Belle is a female unicorn pony who first appears in the season five premiere. She is a baker who lives in a village founded by Starlight Glimmer, where its residents have given up their cutie marks. As of The Big Mac Question, she is Big McIntosh's wife.

Sugar Belle shares her name with a G2 Earth pony.

Sugar Belle first appears in The Cutie Map - Part 1 to serve the Mane Six self-baked muffins during their stay at Our Town, but without her cutie mark, her muffins are unappetizing to Pinkie Pie, who says she's "accidentally eaten cardboard tastier than that".

She briefly overhears the six friends bickering and questions if their friendship is ending. She is later confused when she finds that the six have made peace and takes a keen interest in how they can remain friends despite their differences. Realizing she is being watched, she and two other ponies who share her curiosity—Party Favor and Night Glider—meet the Mane Six in private and express their desire to have their old cutie marks again. They inform the six about the vault in which their marks are kept, inadvertently leading them into a trap laid by Starlight Glimmer.

In The Cutie Map - Part 2, when Fluttershy appears to convert to the town's ways, Starlight Glimmer asks her to identify the ponies who told the Mane Six about the vault. Party Favor takes the blame for Sugar Belle and Night Glider, protecting them from punishment.

Later, Fluttershy exposes to the villagers that Starlight still has her original cutie mark. Realizing she and the others have been deceived, Sugar Belle reclaims her old cutie mark and helps the Mane Six recover their marks from Starlight alongside Party Favor, Night Glider, and Double Diamond. During the pursuit, Sugar Belle creates pies from snow to throw at Starlight. After Starlight escapes, Sugar Belle remains at the village with the other ponies, excited to bake delicious recipes again.

She appears again at the end of The Cutie Re-Mark - Part 2, where she and the other ponies at the village are shown forgiving Starlight for her actions.

In To Where and Back Again - Part 1, Sugar Belle appears among her fellow villagers celebrating the town's Sunset Festival. She also appears at the end of Part 2.

Sugar Belle appears at Starlight's graduation ceremony in Celestial Advice and in a flashback in Rock Solid Friendship.

In Hard to Say Anything, Sugar Belle appears as the object of affection for both Big McIntosh and another stallion named Feather Bangs. Where Big Mac attempts to win Sugar Belle's heart through apple deliveries and fairy tale-inspired approaches, Feather Bangs does so with his swagger and smooth talk. After a heated musical battle between Big Mac and Feather Bangs results in damage to her bakery, Sugar Belle rejects both of them.

With the help of the Cutie Mark Crusaders, Big Mac eventually wins Sugar Belle's heart by repairing the damage to her bakery and building a new, much larger display case for her desserts. Sugar Belle reveals that she likes Big Mac as well, and they begin a romantic relationship.

In It Isn't the Mane Thing About You, Sugar Belle makes a brief cameo appearance walking with Big Mac at Sweet Apple Acres.

In The Break Up Break Down, Sugar Belle and Big Mac celebrate Hearts and Hooves Day together, but when Big Mac overhears her conversation with Mrs. Cake, he assumes that she wants to break up with him. As a result of this miscommunication, Big Mac tries to break up with her first. It is later revealed, however, that Sugar Belle is taking a part-time apprenticeship under Mrs. Cake in Ponyville, meaning she and Big Mac can spend more time together. With the misunderstanding cleared up, Big Mac escorts Sugar Belle to the Hearts and Hooves Day surprise he planned for her.

In Marks for Effort, Sugar Belle briefly appears waiting for Big Mac, who now has more time to spend with her after his chores are completed by Cozy Glow. In The Washouts, she walks out of the stadium with Big Mac following the Washouts' first show.

In the holiday special My Little Pony Best Gift Ever, Sugar Belle appears celebrating Hearth's Warming Eve with the Apple family and Pie family. During One More Day, she watches Rarity rush out of Carousel Boutique, and Big Mac kisses her underneath some mistletoe. She later talks to Burnt Oak in the marketplace while Applejack talks to her friends. During The True Gift of Gifting, she and Big Mac are seen looking out at the snowy night sky.

In The Last Crusade, Sugar Belle appears alongside Big Mac during CMC Appreciation Day. In The Big Mac Question, Sugar Belle plans a surprise to propose marriage to Big Mac (unaware that Big Mac is planning to do the same), but Spike, Discord, the Cutie Mark Crusaders, and Mrs. Cake's attempts to help get in the way. Eventually, Sugar Belle and Big Mac both propose to each other, and they get married under the same tree Big Mac's parents were married.

In The Ending of the End - Part 2, Sugar Belle gathers with the Earth ponies alongside Big Mac and his family in Ponyville when they confront Mayor Mare regarding the tensions between the pony races. She later celebrates with the rest of Equestria's citizens following the defeat of Queen Chrysalis, Lord Tirek, and Cozy Glow. In The Last Problem, she appears in flashbacks attending Twilight's coronation with Big Mac and his family, and comforts Big Mac when he feels ashamed of the mix-up with his apple deliveries. In the future, she is revealed to be living at Sweet Apple Acres and raising a son with Big Mac. Sugar Belle also appears alongside Big Mac in Applejack's group shot during The Magic of Friendship Grows.

A flashback of her, Night Glider, Party Favor, Double Diamond and the Mane Six confronting Starlight in The Cutie Re-Mark is used in Memories and More.

In My Little Pony/Transformers Issue #4, Sugar Belle appears taking part in the final battle against Queen Chrysalis' evil changelings and the Decepticons.

Sugar Belle appears as one of the contestants in a baking competition in Pinkie Pie: Big Baking Bonanza!

Sugar Belle is a character in Gameloft's mobile game, and was added in the Version 2.5 update on September 24, 2015 (for iOS) and September 30, 2015 (for Android). Her in-game description states "Sugar Belle's a unicorn who's brilliant at baking! ... After she got her cutie mark, anyway. Without it, Pinkie Pie thinks her baking tastes worse than cardboard..." Future Sugar Belle is unlocked at the end of the Cutie Mark Deuxsaders event. Her in-game description states "It isn't ours to speculate on Sugar Belle's future, but we suspect it'll be full of plenty of apple pastries -- each one baked with a special kind of love." She has a story role during the "Royal Dining: Entrée" event as a judge in the Equestrian Super Chef Competition.

Sugar Belle appears on an Enterplay trading card series 3 binder.[3] In the Equestrian Odysseys expansion set of Enterplay's collectible card game, card #213 UR is of Sugar Belle. In the High Magic expansion set, card #34 C of Sugar Belle lists the quote "Pies, cookies, and cupcakes all have one thing in common: the first time you bite into one when they're still warm from the oven, you never forget it!"

Beginning with the episode The Maud Couple, Sugar Belle appears in the opening intro by the lake between the Castle of Friendship and the School of Friendship along with Big Mac.

"Is your friendship ending?"
— To the Mane Six, The Cutie Map - Part 1

"Different talents lead to different opinions, which lead to bitterness and misery."
— The Cutie Map - Part 1

"I finally have a chance to bake something besides terrible muffins!"
— The Cutie Map - Part 2

"But you will be a judge for the baking contest, right?"
— To Starlight Glimmer, To Where and Back Again - Part 1

"All I used to bake were boring old muffins, but thanks to your apple deliveries, I get to bake all kinds of delicious treats! Apple pies, apple fritters, apple turnovers, caramel apples, caramel apple cakes... [sighs] I just wish I had more room to display it all. My shelves only hold so much."
— Hard to Say Anything

"What in Equestria has gotten into you two?! If you think I'm the kind of pony that likes all this nonsense, then you clearly don't know me at all! I wish everypony would just... leave me alone!"
— To Big McIntosh and Feather Bangs, Hard to Say Anything

"Now I have twice as much room for all my desserts! [gasps] Which means... I can make even more! I've been dying to try baking cream pies and whoopie pies and icebox cakes and, of course, more apple treats!"
— Hard to Say Anything

"I like you, too."
— To Big McIntosh, Hard to Say Anything

"Oh, Big Mac! I was talking about my cousin! I have this wacky cousin who's never been on his own, but I have to let him run my shop on weekends. Which is why you won't be delivering to my village anymore because I'll already be here apprenticing with Mrs. Cake, who does that two days a week. No, three."
— The Break Up Break Down

"This apple tree and pear tree are stronger together. They'll survive whatever comes because they don't have to do it alone. They belong together. Like your parents. And like us."
— To Big McIntosh, The Big Mac Question

"Today was a disaster. But today was also the last day we're ever gonna have to do anything apart. From here on out, we'll be together. And we'll make sure everything always works out just right."
— To Big McIntosh, The Big Mac Question

"Pies, cookies, and cupcakes all have one thing in common: the first time you bite into one when they're still warm from the oven, you never forget it!"
— Enterplay collectible card game High Magic card #34 C of Sugar Belle 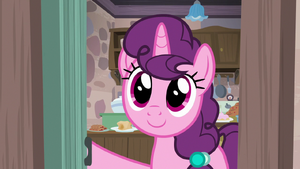