Sugarcoat is a female human and one of the Crystal Prep Academy Shadowbolts in My Little Pony Equestria Girls: Friendship Games.

Sugarcoat appears in Friendship Games as a student of Crystal Prep Academy and a member of its sports team, the Shadowbolts. She first appears on the bus to Canterlot High School after Twilight Sparkle gives a clumsy speech to her teammates. When Twilight sits down next to her, Sugarcoat bluntly remarks on the ineffectiveness of her speech.

Sugarcoat participates in the Academic Decathlon of the Friendship Games, being paired with Indigo Zap during the woodshop portion. They construct a two-story birdhouse that wins the event, and she gloats over her victory to Sandalwood and Micro Chips. During the spelling bee event, she misspells the word "cymotrichous."

In the Tri-Cross Relay, Sugarcoat is again paired with Indigo Zap in motocross against Rainbow Dash and Sunset Shimmer. When Twilight is unable to score a bull's-eye in archery, Sugarcoat comments that she is "really bad at this." She ends up failing the motocross event after being attacked by the giant plant monster.

During the final event, Sugarcoat joins Principal Cinch and the other Shadowbolts in pressuring Twilight into releasing the magic she collected throughout the Games, and she watches in horror as the magic transforms Twilight into the monstrous Midnight Sparkle. As Midnight slowly destroys the world around her, Sugarcoat and her teammates help save their fellow students and the Wondercolts.

After Twilight returns to normal, Sugarcoat is outspoken about the negative consequences of Cinch's actions, with Pinkie Pie remarking that it's "a lot to take in when you say it all at once."

In the half-hour special Mirror Magic, Sugarcoat briefly appears performing in the Dance Magic music video as it is being played at the Canterlot Mall.

In the novel Twilight's Sparkly Sleepover Surprise, Sugarcoat, along with Sour Sweet and Sunny Flare, attempts to give Sci-Twi advice on friendship, but she bickers with her friends instead. After Twilight invites her to Rarity's sleepover, she mellows out and even turns against Sunny Flare when she starts to ruin the party with her snobby attitude.

Contrary to her name, Sugarcoat tends to be pretty straightforward with what she has to say, which can come off kind of harsh sometimes. While Applejack is known for being honest, Sugarcoat is just blunt.[1]

At least two Equestria Girls dolls of Sugarcoat were released as part of the toyline's Friendship Games lineup: a "Sporty Style" variant and a "School Spirit" variant. The Sporty Style doll comes with a motocross helmet. Sugarcoat's description on the back of her School Spirit doll's packaging reads, "Nothing but the best!"

Sugarcoat displays an overly blunt, cynical attitude towards others, Twilight Sparkle in particular, pointing out their faults without hesitation. This notably contrasts with her name, which means to make something sound more pleasant than it is. Like most of her schoolmates, Sugarcoat is highly competitive, arrogant, and a poor sport. She is also willing to go to any means necessary to level the playing field, such as pressuring Twilight into using magic to their school's advantage when they suspect Canterlot High School of doing the same. However, she shows a more compassionate side when she comes to her rivals' rescue after her team's actions end up putting both schools in danger.

"That was a really bad speech. You should consider not speaking in public."
— To Sci-Twi, My Little Pony Equestria Girls: Friendship Games

"You are kinda being a doormat right now."
— To Sci-Twi, My Little Pony Equestria Girls: Friendship Games

"You're really bad at this!"
— To Sci-Twi, My Little Pony Equestria Girls: Friendship Games

"At least they didn't manipulate Twilight into releasing all the stolen magic and turning into a power-crazed magical creature that tried to rip the world apart just to win a game."
— Referring to Principal Cinch, My Little Pony Equestria Girls: Friendship Games

"We definitely aren't here because we like standing in lines."
— To Rarity, My Little Pony Equestria Girls: Dance Magic

"Combining our talents is the most logical thing to do."
— My Little Pony Equestria Girls: Dance Magic 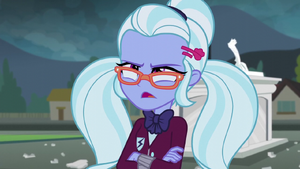