Sugarcube Corner[note 1] is a bakery and confectionery located in Ponyville. It is operated by Mr. and Mrs. Cake. It's also the workplace and home of Pinkie Pie.

Sugarcube Corner is featured in multiple episodes. It first appears in The Ticket Master in the background. Pinkie Pie bakes cupcakes there in Applebuck Season and consumes desserts prepared for the royal visit of Princess Celestia under the pretense of being a food-taster in Swarm of the Century. The first floor holds a store-front, which is also used as a party or gathering space in several episodes, as well as a kitchen and a room with a taffy maker seen in Call of the Cutie. The second floor contains Pinkie Pie's bathroom, which is seen in Feeling Pinkie Keen, while the third floor in the building's cupcake-shaped tower contains Pinkie's bedroom. There are café tables outside the shop for customers to enjoy their treats right outside the store, which Pinkie uses in Griffon the Brush Off.

In Party of One, Pinkie holds a birthday party for her pet alligator Gummy in her loft on the top floor. Twilight Sparkle also stops by the store to buy a cake for Pinkie's surprise party, which Pinkie Pie partly overhears through a hole in the floor of her room which seems to bypass the second floor entirely. When Rainbow Dash comes to collect Pinkie for the surprise party, she enters Pinkie's room through the balcony door at the very top of the building.

In Lesson Zero, Twilight buys twelve cupcakes for a picnic with her friends, although Mrs. Cake gives her an extra one for free, making it a "baker's dozen".

In Baby Cakes, even more of the building is shown. Pinkie Pie serves a snack to Pound Cake and Pumpkin Cake in a previously unseen room across from the rear staircase that joins to the kitchen, containing a dining table and shelves of candy. There is another bathroom, where she attempts to give the baby twins a bath. Pound and Pumpkin share a nursery on the second floor where Pinkie Pie attempts to change their diapers and settle them down for their naps, although not before Pound Cake drags her from the room and down the stairs through the main floor. There is also another doorway in the second floor hallway but it is unclear what it leads to.

Pinkie Pie's loft and bedroom are shown in slightly more detail in Pinkie Pride. She keeps her party cannon in a large cabinet next to her bed, and a short staircase leads up to the balcony. Along the staircase wall, Pinkie has hung various photos of the parties she's thrown, including the first party she ever threw, Twilight's welcome-to-Ponyville party, Gummy's birthday party, and Shining Armor and Princess Cadance's wedding reception.

In the episode Maud Pie, Twilight Sparkle, Rainbow Dash, Applejack, Fluttershy, and Rarity arrive at Sugarcube Corner some time before sunrise. When Pinkie Pie answers the door and shoves them inside, they find the pink pony's upper-story loft filled with mountains of rock candy. With the arrival of Pinkie's sister Maud approaching, Pinkie asks her friends to taste-test her rock candy recipes.

After some time of taste-testing—and the ponies collapse from stomach and toothaches—Pinkie explains that the candies are part of a tradition between herself and Maud in which they make and trade rock candy necklaces. Pinkie wishes to let her friends in on this tradition, especially with Maud going away soon to get her "rocktorate" in rock science. Pinkie tells them how much she's looking forward to seeing her best friends and closest sister get along. When Rarity informs Pinkie that Maud will be arriving at the train station soon, she bolts out of the bakery.

In Testing Testing 1, 2, 3, Rainbow Dash notices the Cutie Mark Crusaders coming out of the bakery while flying overhead with Twilight Sparkle.

In Castle Sweet Castle, Pinkie gets some balloons and confetti from Sugarcube Corner to help spruce up Twilight's castle. In Make New Friends but Keep Discord, Discord visits Pinkie at Sugarcube Corner to order every single cake in the bakery and ask if she's accompanying anypony to the Grand Galloping Gala, but Discord cancels his order after seeing Fluttershy walking with Tree Hugger. In The Lost Treasure of Griffonstone, Pinkie is baking a marjoline recipe with Gummy when her cutie mark begins glowing, indicating she is being called by the Cutie Map. She leaves Gummy to finish the recipe, which turns out to be a mistake since Gummy does not get any work done. In Slice of Life, Gummy witnesses the wedding guests flying into Town Hall from Sugarcube Corner while giving an existential inner monologue. In Party Pooped, it is revealed that Pinkie has a secret room under Sugarcube Corner where she keeps files on everyone in Ponyville and what kind of parties they love. Sugarcube Corner appears in Pinkie's dream in Do Princesses Dream of Magic Sheep? where the Tantabus turns all the cakes into horrible gelatinous monsters.

In No Second Prances, Pinkie Pie introduces Starlight to Mrs. Cake at Sugarcube Corner in hopes that the two can become friends, only for Mrs. Cake to feel intimidated after Starlight uses her magic to craft a beautiful cake in seconds. In 28 Pranks Later, Rainbow Dash visits Pinkie Pie at the Corner and finds her to be apparently ill, and she later discovers the "zombified" Mrs. Cake, Pound Cake, and Pumpkin Cake. In The Fault in Our Cutie Marks, Gabby and the Cutie Mark Crusaders visit Sugarcube Corner as part of their quest to find out what Gabby's special talent is.

In P.P.O.V. (Pony Point of View), Twilight visits Pinkie Pie at Sugarcube Corner in order to hear her side of the story regarding her disastrous recent outing with Applejack and Rarity.

In A Flurry of Emotions, Twilight visits Pinkie at Sugarcube Corner to get some treats for the sick foals at Ponyville Hospital, as well as some apology cakes for Cheerilee and the toy salespony. During this, she leaves Flurry Heart to a playdate with Pound and Pumpkin.

In It Isn't the Mane Thing About You, Pinkie Pie accidentally messes up the inside of Sugarcube Corner with silly string while celebrating Pound and Pumpkin's "sneeze-aversary", and later floods it with shampoo while trying to clean it up.

In School Daze - Part 2, Twilight and her friends gather at Sugarcube Corner to discuss where their missing students could have gone.

In The Break Up Break Down, Sugar Belle visits Sugarcube Corner while planning to apprentice under Mrs. Cake. It is also where Big McIntosh (temporarily) breaks up with her, under the belief that she was planning to break up with him.

In Marks for Effort, Sweetie Belle brings Cozy Glow to Sugarcube Corner, so to assist the latter in helping Mrs. Cake with her baking.

Sugarcube Corner is seen multiple times during Yakity-Sax, with Pinkie Pie temporaily moving out due to her despair over not being able to play the Yovidaphone.

In Student Counsel, Starlight, delayed by her guidance counselor duties hurries over to Sugarcube Corner to learn a cake recipe from Mrs. Cake with Trixie, but is told by Mrs. Cake that she has already given Trixie the recipe.

The kitchen is briefly seen in Between Dark and Dawn, when Mrs. Cake informs Pinkie that she forgot to bake cupcakes for Cheerilee's class. Princess Celestia and Princess Luna then burst through the wall, commandeering the kitchen so they can bake the cupcakes themselves.

In The Big Mac Question, the kitchen is once again shown, with Mrs Cake baking several desserts for Sugar Belle's planned proposal to Big Mac.The exterior is shown when a giant apple monster (created by the fusion of the apples Big Mac intended to use in his own proposal, brought to life by Discord) approaches Sugar Belle.

In The Last Problem, Sugarcube Corner is shown in future Ponyville, now being run by the grown-up Pound and Pumpkin Cake.

The human world version of Sugarcube Corner is shown to be a small cafe on a street corner. In the chapter book Equestria Girls: Through the Mirror, human Flash Sentry refers to this cafe as the "Sweet Shoppe".

In the film, Twilight and her friends stop at the Sweet Shoppe soon after Twilight's return to catch up on recent events.

In the animated short Music to My Ears, DJ Pon-3 stops by there and waves to the main five (minus Twilight).

In Monday Blues, Sunset Shimmer gets breakfast at the Sweet Shoppe but drops it as soon as she exits when she trips over a dog leash.

Equestria Girls: Choose Your Own Ending

Sugarcube Corner appears as a central location in Pony Life. In The Trail Less Trotten, Pinkie Pie takes over as owner of the bakery from Mr. and Mrs. Cake. 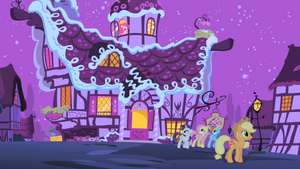