Suited For Success is the fourteenth episode of the first season of My Little Pony Friendship is Magic. In this episode, Rarity wants to make dresses for her friends for the upcoming Grand Galloping Gala, but has trouble satisfying all their requests. The title of the episode is a play on "dressed for success"; the word 'suited' here both refers to the original phrase, as well as the meaning of 'being appropriate'.

The fourth Evolution of a Scene video states that the original title of this episode was "Dress for Failure", a more immediate reference to dress for success. Lauren Faust later confirmed this fact on Twitter.[2] The ninth MLP scenes season 1 video features a shot of Sea Swirl, Lemon Hearts, Cloud Kicker, Merry May, and Minuette at the beginning of the first fashion show, which isn't included in the final version of the episode.

The episode was #4 in the We Heart Ponies Fan Favorite Mare-a-thon, in the leadup to Hearts and Hooves Day.

Arranging for a fashion show

The episode begins with a shot of the Carousel Boutique, which cuts to Rarity levitating a dress illustration and telling Opalescence about her "stunning new gown" for the Grand Galloping Gala in Canterlot. She begins sewing it and makes Opal involuntarily help her.

There's a knock on the door and Twilight Sparkle and Applejack enter, interrupting Rarity's concentration, but she suppresses her irritation and asks if she can help them. Twilight asks her to fix a button on her dress for the Gala.

Rarity insists on making Twilight a new dress instead and offers to spruce up Applejack's "work duds" as well. Rainbow Dash comes crashing into the room from above and knocks over some mannequins. Rarity exclaims "I-de-a!" in a sing-song voice and offers to make Dash, Pinkie Pie, and Fluttershy dresses for the Gala too, and they decide to hold a fashion show with their new dresses. Applejack questions whether Rarity can handle the workload, but Rarity laughs at the idea. The scene cross-fades to the song Art of the Dress, during which Rarity makes her friends' dresses.

After the song, Rarity leads her friends into the boutique with eyes closed, then shows them their new outfits. She proudly describes how each dress matches the pony it's for, and asks, "Aren't they all amazing?" The ponies stand awkwardly in silence, then struggle for words; Applejack says. "They sure are... sumth'n", Twilight agrees "Yes! Something.", Pinkie Pie says "I love something. Something is my favorite" with an awkward smile, and Fluttershy sadly says "It's... nice." Rarity presses the ponies for their honest opinion, and they all agree that the dresses aren't what they had in mind. Rarity overcomes the disparaging reception and resolves to redo the dresses, wanting her friends to think they're absolutely perfect. After the ponies leave, Rarity wonders aloud, "What have I gotten myself into?"

Fluttershy enters the boutique and Rarity shows her her new new gown. The scene cross-fades to Fluttershy in front of a mirror wearing the dress, and she tries to placate Rarity by saying she loves it, but Rarity doesn't buy it and pressures Fluttershy into telling her what she really thinks. Fluttershy goes off into a stream of intricate complaints about the sewing and the fabric, which leaves Rarity with her jaw dropped.

The scene cross-fades into a reprise of Art of the Dress, where each pony gives their input about the dress Rarity sews them and Rarity gets increasingly frustrated and exhausted. Twilight requests technically accurate constellations; Pinkie Pie requests lollipops, balloons, candy, and streamers; Fluttershy requests French haute couture; Applejack requests galoshes; and Rainbow Dash gives the vague request "it needs to be about 20% cooler." At the song's conclusion, having finished all but her own, Rarity tells Opal that they are the ugliest dresses she's ever made.

Rarity presents the dresses to her friends, and they all happily proclaim they're exactly what they asked for. Spike arrives at the door and excitedly reports that he happened to mention Rarity's fashion show to Hoity Toity, which Twilight identifies as "the bigwig fashion hotshot in Canterlot", and that Hoity Toity is coming to Ponyville from Canterlot to see Rarity's work. Rarity shrinks in horror at the thought that Hoity Toity will see the dresses her friends helped design.

At the fashion show, Rarity peeks from behind the curtain and spots Hoity Toity. She breathes heavily and tells herself to relax, certain that Hoity Toity will like the outfits. She shrieks in panic when the lights dim, before realizing it means the show is starting. The show soon starts, and the DJ, DJ Pon-3, puts on a record as Spike emcees. He announces the "breathtaking designs of Ponyville's own Rarity!" The ponies step onto the catwalk in their dresses and come to stand on a rotating platform. The crowd responds negatively, and Rarity's friends realize they overdid the dresses' designs. Hoity Toity declares the dresses "amateurish," "a piled-on mishmash of everything but a kitchen sink," "the ugliest things [he's] ever seen," and other disparaging remarks. Spike, still excited for Rarity, asks her to come out and take a bow. She walks out with her eyes lowered, and the scene fades to the whispers of the crowd and the awkward smiles of Rarity's friends on stage.

The next scene begins with Rarity's friends at her door. Pinkie Pie knocks and asks Rarity if she's okay, mentioning that she hasn't come out in days. Rarity goes on a dramatic monologue:

"I'm never coming out! I can't show my face in Ponyville ever again! I used to be somepony. I used to be respected. I made dresses. Beautiful, beautiful dresses! But now everypony is laughing at me. I'm nothing but a laughing stock!"
— Rarity

Twilight tries to coax her out, but she replies, "Leave me alone! I want to be alone!" The ponies try to figure out what to do, and Twilight spies Rarity's unfinished dress through the keyhole.

The scene fades to Rarity in her room in front of a mirror in a robe and slippers, contemplating leaving to live in exile. Rarity's contemplations are interrupted by Opal's mewling. She searches for the origin of the noise out the window, and sees Opal distressed and shivering, stuck on a tree branch. Rarity runs outside to rescue her and finds Rainbow Dash next to Opal, chiding her for stranding Opal on the tree. Dash points her attention to the dress that Rarity's friends finished for her, "thanks to Fluttershy's freaky knowledge of sewing", according to Applejack. When asked for her opinion on the dress, Rarity says she doesn't like it—she loves it. The ponies apologize for rejecting Rarity's original designs. Rarity forgives them but continues to wail about her ruined career. Fortunately, Hoity Toity agrees to attend a revised fashion show at Rarity's boutique.

The other fashion show

Hoity Toity declares "take two", Spike closes the curtains, and Rarity puts up a magic light show. Stylized animated backdrops accompany each dress presentation, with the dresses restored to how Rarity originally made them, and Hoity Toity expresses his amazement at the designs, calling them "simply magnificent," "brilliant," "spectacular," and "absolutely amazing." Rarity thanks him, and the scene cross-fades to Twilight dictating her friendship report to Spike. In Twilight's report, she says "you shouldn't look a gift horse in the mouth."

Hoity Toity walks over to Rarity and congratulates her for her impressive fashion debut and requests a dozen of each dress "by next Tuesday." Rarity laughs nervously with a tic in her eye, and the scene cuts to black.

Applejack: So all you have to do is make a different, stunning, original, amazing outfit for one, two, three, four, five... plus yourself, six ponies? And lickety split?
Rarity: Oh, Applejack. You make it sound as if it's going to be hard.

Rarity: These are your new outfits. What do you think of your old duds now, Applejack? Pretty swanky, are they not? And Twilight! I made this dress for you and I designed each outfit theme to perfectly reflect each pony's unique personality. Oh, it took me forever to get the colors right on this one, Rainbow Dash, but I did it. Oh, and it turned out beautiful, don't you think? Ooh, and I know you are going to love yours, Fluttershy. It just sings spring! And Pinkie Pie, look! Pink! Your favorite! Aren't they all amazing?
Twilight Sparkle: Wow... They're...
Rainbow Dash: Yeah, they're...
Applejack: They sure are... sumth'n.
Twilight Sparkle: Yes! Something.
Pinkie Pie: I love something! Something is my favorite!
Fluttershy: It's... nice.

Rarity: Tell me, tell me, tell-me-tell-me-tell-me!
Fluttershy: All right! Since you really wanna know... [inhales] The armscye's tight, the middy collar doesn't go with the shawl lapel, the hems are clearly machine-stitched, the pleats are uneven, the fabric looks like toile, you used a backstitch here when it clearly called for a topstitch or maybe a traditional blanket stitch, and the overdesign is reminiscent of prêt-à-porter and not true French haute couture. [pauses] But, uh... you know... um, whatever you want to do is fine.

Rarity: Oh, Opal. These are the ugliest dresses I've ever made.

Pinkie Pie: We all finished your dress for you!
Applejack: Thanks to Fluttershy's freaky knowledge of sewin'.
Fluttershy: Do you like it?
Rarity: Like it? Like it?!
Fluttershy: Uh-oh. She doesn't like it.
Rarity: No, I don't like it.
Other ponies: Aw.
Rarity: I love it! 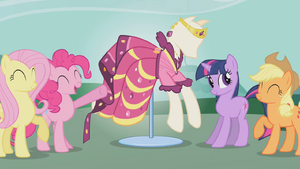