Not to be confused with Starburst.[1]

Sunburst is a male unicorn pony, Starlight Glimmer's childhood friend, and royal crystaller to Flurry Heart. As of A Horse Shoe-In, he is the vice principal of the School of Friendship. He first appears as a colt in the past in The Cutie Re-Mark - Part 2, and he appears as a full-grown stallion in present day in the season six premiere.

In The Cutie Re-Mark - Part 2, Starlight Glimmer takes Twilight Sparkle and Spike back in time to her youth, where they witness a young Sunburst and Starlight playing a book-stacking game. When Starlight's move nearly causes the books to topple onto her, Sunburst saves her using telekinesis, earning him his cutie mark. Afterward, Starlight loses touch with Sunburst because he earned his cutie mark before her, and she starts believing that cutie marks ruin friendships.

In The Crystalling - Part 1, Starlight says that Sunburst "knew everything there was to know about magic" when they were foals, contradicted in the flashbacks by Starlight being better at spells than him, and would occasionally help her along in her magic development. When Starlight later approaches him in the Crystal Empire to reconnect with him, he mainly acts awkward around her and purports to be an important wizard.

However, it is later revealed in The Crystalling - Part 2 that, although Sunburst is very knowledgeable about magic, he is untalented at casting it. He uses this knowledge of magic to help Starlight and her friends restore the Crystal Heart and complete the newborn baby Flurry Heart's Crystalling ceremony. Following this, Sunburst is appointed as Flurry Heart's "crystaller" and magic advisor, and he and Starlight promise to stay in touch.

Sunburst also appears in The Times They Are A Changeling, staying close to Flurry Heart during a suspected changeling incursion. In To Where and Back Again - Part 1, when Princess Cadance, Shining Armor, and Flurry Heart are captured by the changelings, Sunburst dispatches Thorax to notify Twilight in Ponyville and to help save Equestria.

Sunburst appears at Starlight's graduation ceremony in Celestial Advice and during a magic simulation when Twilight considers possible places to send Starlight. He is also verbally alluded to by Trixie in All Bottled Up.

In Uncommon Bond, Sunburst visits Starlight in Ponyville and learns that he shares Twilight's love of antiquing, Trixie's love of stage magic, and Maud Pie's passion for geology, much to Starlight's disappointment. When he realizes how left out she feels, Sunburst organizes a life-sized version of their favorite board game for them to play together.

In Shadow Play, Sunburst comes into possession of Star Swirl the Bearded's lost journal, and he plays a role in both releasing the Pillars of Old Equestria from limbo and saving Equestria from the Pony of Shadows.

In The Parent Map, Sunburst and Starlight are called by the Cutie Map to their old hometown of Sire's Hollow, where he is forced to deal with his mother Stellar Flare's overbearing concerns about his future. As he looks for the friendship problem he was called for, Stellar puts constant pressure on him to succeed, eventually causing him to explode at her in anger. Realizing his strained relationship with his mother is the very friendship problem he was summoned to fix, Sunburst talks it out with Stellar Flare, and they reconcile.

In Student Counsel, Sunburst attends Maud and Mudbriar's spring solstice party and helps Starlight Glimmer and Terramar search for Silverstream in the Everfree Forest, where they run into a flock of cockatrices during their migration period.

In Between Dark and Dawn, Spike mentions Sunburst when he gives Twilight instructions on how to fix the amulet that controls the sun and moon when it malfunctions.

In A Trivial Pursuit, Sunburst takes part in Ponyville's Trivia Trot game. Partnered with Cranky Doodle Donkey at first, he is forced out of the game when Cranky is disqualified for sleeping (thanks to Twilight). After Twilight gets Pinkie Pie disqualified, Sunburst partners up with Twilight, but upon seeing how frazzled she is, Sunburst tries to get her disqualified in order to preserve his right answer percentage record. Twilight is outraged by this at first, but the two reconcile when she realizes she had done the same to Pinkie.

Sunburst appears in A Horse Shoe-In when Trixie recommends him to be Starlight's vice principal at the School of Friendship. With Sunburst no longer needed to serve as Flurry Heart's crystaller, Starlight hires him.

In The Ending of the End - Part 2, Sunburst takes part in the final battle against Queen Chrysalis, Lord Tirek, and Cozy Glow. In The Last Problem, Sunburst attends Twilight Sparkle's coronation ceremony. He later appears as an older stallion still serving as the School of Friendship's vice headmare in future Ponyville during The Magic of Friendship Grows.

In My Little Pony: Legends of Magic Issue #1, Sunburst uses the secret records inside Star Swirl the Bearded's private study in his research into the history of Equestria. In the subsequent issues, he reads about the legends of Rockhoof, Mistmane, Flash Magnus, Somnambula, and Mage Meadowbrook. He later reads Stygian's account of his gathering the Pillars and their battle with the Dazzlings, later praising the former villain's heroism while questioning Star Swirl's.

Sunburst appears at the end of My Little Pony: Friendship is Magic Issue #100, researching the temples containing the other Trees of Harmony alongside Twilight, Starlight, Star Swirl the Bearded and Stygian.

In My Little Pony: Generations Issue #1, Sunburst is seen helping Starlight and the Mane Six deal with the influx of new students at the School of Friendship.

SUNBURST is a Unicorn, and was Starlight Glimmer's best friend when they were young ponies. He's great at magic, and when the new baby Alicorn Flurry Heart and the Crystal Heart needed someone to step up, Sunburst was the pony to do it. Now he's the royal crystaller to Flurry Heart.

Sunburst is a mild-mannered, studious pony with a knowledge for magic spells rivaling that of Twilight Sparkle. When first introduced, his reunion with Starlight is awkward due to him wishing to keep his dropping out of magic school a secret. He later admits that he has much self-loathing and regret for his lack of magical ability. After helping restore the Crystal Heart, he becomes more confident in himself and fully rekindles his friendship with Starlight.

Like Twilight, Sunburst tends to get excited over historical artifacts and ancient spells, and he is a big fan of Star Swirl the Bearded. He also has a fondness for stage magic, knowledge of geology, and is fluent in Old Ponish. Also like Twilight, he tends to get wrapped up in his studies, to the point of barely noticing what's going on around him (such as being unaware that the Crystal Empire was being engulfed by a blizzard).

Sunburst is usually even-tempered, rarely getting angry at others, but he gets extremely frustrated by his mother's constant attempts to plan out his future, to the point of exploding in anger at her over it. In A Trivial Pursuit, he is shown to be very competitive, willing to get Twilight disqualified if it means preserving his record of right answers in the Trivia Trot contest. Though he does later apologize to Twilight after she figures out what he's trying to do.

In A Horse Shoe In, he admits that he'd always thought he would one day work at a school, leading him to accept the vice-principal position at the School of Friendship.

"S-Starlight! My goodness, it-it's been a long time!"
— The Crystalling - Part 1

"So... the Princess of Friendship wants you and I to be friends again?"
— To Starlight Glimmer, The Crystalling - Part 1

"No rest for the wizardly."
— The Crystalling - Part 2

"I'm not an important wizard! I'm not even a wizard at all!"
— The Crystalling - Part 2

"Reading about magic is one thing, but you don't know what it was like at magic school! To know so much and not be able to do any of it!"
— The Crystalling - Part 2

"This changeling replaced your friend to get close to the baby! What other explanation could there be?!"
— To Spike, The Times They Are A Changeling

"I always liked close-up magic because I knew I could do it if I just practiced enough."
— Uncommon Bond

"Solving a thousands-year-old mystery could take forever! Think of the research! The re-reading! The re-re-reading!"
— Shadow Play - Part 1

"My cutie mark is glowing! I know what this means! Why am I yelling?!"
— The Parent Map

"I didn't come all the way from the Crystal Empire to lose. And I hope you realize I have the highest percentage of correct answers, and I aim to keep it that way."
— To Rainbow Dash, A Trivial Pursuit

"Well, honestly, now that Flurry Heart's a little older, there really isn't much for me to do outside of the occasional tradition or festival. And working at a school is what I always thought I'd do. I mean, if you'll have me."
— To Starlight Glimmer, A Horse Shoe-In 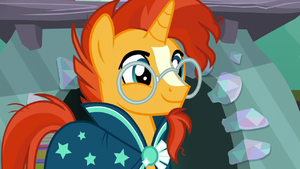