Stellar Flare and Sunspot are the unicorn pony parents of Sunburst who first appear in the season five episode The Cutie Re-Mark - Part 2. Stellar Flare is named and has a supporting role in The Parent Map, but "Sunspot" is unnamed, having a placeholder name.

Stellar Flare and "Sunspot" both have similar orange/yellow color schemes to Sunburst.

When asked in September 2016 if Sunburst is related to Sunset Shimmer, Jim Miller replied, "Unknown".[1]

Stellar Flare and "Sunspot" first appear in the season five finale The Cutie Re-Mark - Part 2. When Twilight Sparkle, Spike, and Starlight Glimmer travel to Sire's Hollow in the past via the Cutie Map, they witness a young Sunburst getting his cutie mark. Sunburst shows his parents, and they go off to celebrate, leaving young Starlight all alone. Stellar Flare and "Sunspot" also appear cheering for young Sunburst during the song Friends Are Always There For You.

In the season six premiere The Crystalling - Part 1, Stellar Flare and "Sunspot" appear again in Starlight's flashback, once again celebrating Sunburst for getting his cutie mark.

In the season eight episode The Parent Map, Stellar Flare appears without "Sunspot" when Starlight and Sunburst are called to Sire's Hollow by the Cutie Map. According to Sunburst, she frequently sends letters to him at the Crystal Empire asking what his plans are for the future. As the head of the Sire's Hollow Development Committee, Stellar is focused on revolutionizing the town and converting its traditional establishments into more urban businesses. This puts her at constant odds with Starlight's father Firelight and his views of historical preservation.

When Stellar Flare learns she is at the center of her son's friendship mission, she eagerly takes the opportunity to spend time with him and help him solve his quest. With Starlight and Sunburst's guidance, she realizes that the efforts she made to revolutionize the town are actually an inconvenience to its citizens, and she teams up with Firelight to determine a more beneficial direction for the town.

When this does not complete Starlight and Sunburst's mission, Stellar Flare becomes overly zealous to help her son, making detailed mission plans, putting pressure on Sunburst to succeed, and even fabricating friendship problems between the townsponies. Both her and Firelight's smothering push Starlight and Sunburst over the edge, and they snap at their parents in anger, prompting them to back off.

Realizing their strained relationship with their parents is the very friendship problem they were summoned to solve, Starlight and Sunburst try to make amends with them. Stellar Flare reveals that she only puts pressure on Sunburst to succeed because he felt lost after flunking out of magic school and she wants to help give his life direction. She agrees to allow Sunburst to find his own way and immediately starts making plans to visit his home in the Crystal Empire.

In the season nine episode The Ending of the End - Part 2, Stellar Flare takes shelter with Firelight and other unicorns inside the School for Gifted Unicorns as Canterlot closes itself off from the other pony races. She is also present during the final battle against Queen Chrysalis, Lord Tirek, and Cozy Glow.

Stellar Flare is a character in Gameloft's mobile game. Her bio states, "Sunburst's mom is hyper-focused on her son's brilliant future -- including the parts of it where she tells him what kind of future he should have."

Stellar Flare is portrayed as being very plan-oriented and success-driven, often coming up with plans for various parts of her life and job. This extends to her overbearing concern for her son Sunburst, as she puts frequent pressure on him to figure out what he wants to do with his future. Stellar is also somewhat of an enthusiast for urban settings, favoring more modern businesses and tastes over traditional.

"Our village needs the same thing you do, Sunburst – a clear plan for the future. That's why I started the Sire's Hollow Development Committee. And I've got plans for this little town. Big plans!"
— Stellar Flare, The Parent Map

"In the future, all ponies will drink their fruit!"
— Stellar Flare, The Parent Map

"How are you gonna explain this to the princess? What's your plan if she fires you from friendship quests?"
— Stellar Flare, to Sunburst, The Parent Map

"I know you don't want me to make up a problem, but what if I start one? [...] I mean, nopony ever became a success by following all the rules, right?"
— Stellar Flare, The Parent Map

"This is a terrible apology."
— Stellar Flare, The Parent Map

"I remember how lost you were when you flunked out of magic school. I thought as long as you had a plan, you'd never feel that way again."
— Stellar Flare, to Sunburst, The Parent Map

"The glowing cutie mark is such a symbol of accomplishment. I don't suppose there's a way for you to get it to glow all the time."
— Stellar Flare, The Parent Map 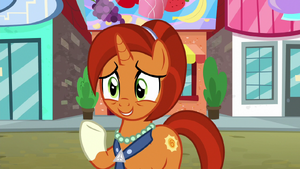 Retrieved from "https://mlp.fandom.com/wiki/Sunburst%27s_family?oldid=2178314"
Community content is available under CC-BY-SA unless otherwise noted.