Sunflower is the Earth pony sister of Babs Seed and a member of the Apple family. She is unidentified in the show, but she and her human counterpart appear in the IDW comics.

Sunflower has a similar color scheme to Big McIntosh.

In the season three episode One Bad Apple, Babs Seed indirectly mentions Sunflower when she says to Applejack, "I promise to keep talking to my big sis about the teasing back home."

In the My Little Pony Annual 2013 comic, Sunflower's human counterpart appears as a student of Canterlot High School with her sister Babs. On the first day of Applejack's freshman year at the school, she meets Babs and Sunflower during lunch, but they brush her off in favor of the fashionista Rarity.

After first impressions break down, Sunflower pulls Applejack aside and tells her to "update" herself in order to fit it better. She also neglects her sick-looking pet chihuahua during the school's rugby tryouts. The next day, Sunflower continues to get chummy with Rarity, who slowly rises in popularity. When Applejack and Fluttershy try to join them, Babs and Sunflower brush them off again, this time far more rudely. Their insults cause Fluttershy to run away in tears.

During the first soccer game of the season between the Wondercolts and the Shadowbolts, Fluttershy tries to approach Sunflower about her sick dog, but Sunflower ignores and insults her again. Having had enough of her and Babs' putdowns, Rarity and Applejack finally call them out on their appalling behavior, leaving them in shock. Sunflower last appears bringing her chihuahua to the Animal Clinic where Fluttershy works for an emergency checkup.

In My Little Pony: Friendship is Magic Issue #21, Babs Seed mentions Sunflower when she says to Applejack, Apple Bloom, Fluttershy, Rarity, and Trixie on page 20, "You guys can hide out with me and my sister."

In My Little Pony: Friends Forever Issue #9, Sunflower appears on pages 3 and 5 as an attendant of Apple Con 45.

In the My Little Pony: Equestria Girls Holiday Special, human Sunflower is shown in MyStable profile pictures on pages 5, 15, 26, and 30—also with a like and comment each on page 30—and appears on pages 38-39.

"We're always on the lookout for new friends. We're actually getting to know one of your classmates—have you met Rarity?"
— To Applejack, My Little Pony Annual 2013

"Ugh, this year's freshmen are so lame. I know, right? I can't believe we were ever that bad! And their fashion choices, augh! And they're such pests! Always butting in on my calls and asking me stuff! What a pain, right?"
— My Little Pony Annual 2013

"Listen, cousin, I know you want to be part of our world. But we're not a charity. I suggest you find some friends you're a little more suited for. Don't aim too high, you know?"
— To Applejack, My Little Pony Annual 2013

"Oh! Okay! Thanks! I'm really glad for your totally unnecessary advice! You freshman girls. You're so weak. You all want to be something you're not."
— To Fluttershy, My Little Pony Annual 2013

"It's an apple attack!"
— My Little Pony: Friendship is Magic Issue #32 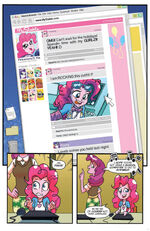