Sunny Daze and Peachy Pie are two female ponies who appear in the episodes The Show Stoppers, The Cutie Pox, Pinkie Pride, and The Fault in Our Cutie Marks. In the show and some merchandise, they are Earth pony fillies, while in some other materials, Sunny Daze is a Pegasus filly and Peachy Pie is an Earth pony mare.

Sunny Daze and Peachy Pie appear as Earth pony fillies in The Show Stoppers. In the Ponyville Schoolhouse talent show, they recite their favorite poem on roller skates. Their act is awarded "Best Dramatic Performance" at the end.

Sunny Daze and Peachy Pie appear as Earth pony fillies in Pinkie Pride, singing with other ponies during Pinkie the Party Planner.

In The Fault in Our Cutie Marks, Sunny Daze and Peachy Pie appear as Earth pony fillies, watching Gabby play baseball during Find the Purpose in Your Life.

Peachy Pie appears in chapter 6 of Ponyville Mysteries: The Tail of the Timberwolf asking the Cutie Mark Crusaders about the timberwolf attack on Zipporwhill's birthday party.

SUNNY DAZE and PEACHY PIE are best friends who do everything together. They're super lovable to boot. When they're not reciting poems while roller-skating, they're sharing a basket of piping-hot curly fries. Mmmmmm, curly fries.

A talking So Soft Newborn doll of Sunny Daze depicts her as a Pegasus. Its packaging lists Sunny Daze's name with a trademark symbol and states that So Soft Newborn Sunny Daze "loves to laugh and play all day! When she says, 'I'm tired,' she is ready to take a nap. Give her the pacifier to help her fall asleep!"

The Toys "R" Us Pony Collection Set includes a mini-figure toy and collector card of Peachy Pie. They and their packaging depict Peachy Pie as a mare, the card and the packaging list Peachy Pie's name with a trademark symbol, and the card states that Peachy Pie "loves baking sweet treats for her friends! She's always testing out new recipes for them to try."

"Did you smell its breath?"
— Peachy Pie, Ponyville Mysteries: The Tail of the Timberwolf

"Look, I have wings!"
— Sunny Daze, So Soft Newborn doll

"I love you Mommy!"
— Sunny Daze, So Soft Newborn doll 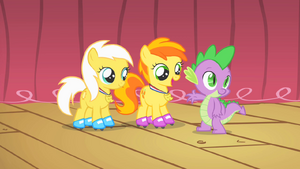