Start a Wiki
Sunny Flare is a female human and one of the Crystal Prep Academy Shadowbolts in My Little Pony Equestria Girls: Friendship Games.

Sunny Flare appears in My Little Pony Equestria Girls: Friendship Games as a student of Crystal Prep Academy and a member of its sports team, the Shadowbolts. She first appears outside the bus to Canterlot High School with Sour Sweet and Fleur Dis Lee. When Twilight Sparkle inadvertently cuts to the front of the bus line, Sunny Flare looks at her with silent contempt, and when the bus arrives, Twilight accidentally knocks her over, making her even more annoyed.

During Canterlot High's welcome party for Crystal Prep, she briefly confronts Sunset Shimmer and the other Wondercolts, condescendingly calling Fluttershy "dearie" at one point.

In the Friendship Games' Academic Decathlon, Sunny Flare is partnered with Sour Sweet in the woodshop event, and she is eliminated from the spelling bee contest for misspelling "rhombus." She and Lemon Zest take part in the speed-skating portion of the Tri-Cross Relay, but they lose to Pinkie Pie and Rarity.

Before the Games' final event, Sunny Flare and her team join Principal Cinch in pressuring Twilight into releasing the magic contained in her amulet, intending to use it against Canterlot High. They all watch in horror as the magic transforms Twilight into Midnight Sparkle, and Sunny Flare is the first to notice Cinch attempt to flee. As Midnight tears open multiple rifts into Equestria, Sunny Flare saves Fluttershy from falling through one.

After Twilight returns to normal, Sunny Flare and her team turn on Cinch for causing Twilight's transformation, and they celebrate their shared victory with the Wondercolts.

In the half-hour special Mirror Magic, Sunnny Flare briefly appears performing in the Dance Magic music video as it is being played at the Canterlot Mall.

In Rollercoaster of Friendship, Sunny Flare makes cameo appearances as an Equestria Land patron accompanied by "Thunderbass" standing near the Equestria Land theme park entrance, near the rollercoaster, and in security camera video footage. She later appears alone texting in the crowd during the park's light parade.

In the novel Twilight's Sparkly Sleepover Surprise, Sunny Flare is depicted as the de facto leader of the Shadowbolts. She claims to know a lot about real friendship, but in reality, she does not, since she keeps bickering with Sour Sweet and Sugarcoat.

Sunny Flare can be a bit of a tattletale and a stickler for making sure everyone is following the rules.[1]

At least two Equestria Girls dolls of Sunny Flare were released as part of the toyline's Friendship Games lineup: a "Sporty Style" variant and a "School Spirit" variant. The Sporty Style doll comes with roller blades. Unlike in the film, Sunny Flare is depicted in merchandise artwork with longer hair.

Sunny Flare is portrayed as being the most poised of her teammates, sharing some of Rarity's elegant and self-confident mannerisms, but with a more arrogant, rude, and aloof demeanor. She also shares her school's competitive streak, poor sportsmanship, and willingness to manipulate others to achieve their goals. Later on, she reveals a more conscionable side to herself when she accosts Principal Cinch for running away after her actions put both schools in danger, and later when she joins her team in rescuing Canterlot High's students.

"Sorry, dearie, but these games aren't about being nice."
— To Fluttershy, My Little Pony Equestria Girls: Friendship Games

"Hey! Where are you going?!"
— To Principal Cinch, My Little Pony Equestria Girls: Friendship Games

"Things at CPA have never been better since Principal Cadance took over."
— My Little Pony Equestria Girls: Dance Magic

"By the time you submit yours, it'll just look like you copied us."
— To Rarity, My Little Pony Equestria Girls: Dance Magic

"It's no use, Sour Sweet. Why are we even still trying?"
— My Little Pony Equestria Girls: Dance Magic

"Absolutely, Sour Sweet. [to Sci-Twi] On the other hand, you could try waiting in line like everyone else."
— Friendship Games novelization

"For a long time, we've told her that she was no good at friendship, but that's not true. We weren't. We were terrible at friendship. She's the one who knows how to reach out and be brave and friendly. It's like she's a princess of friendship."
— Referring to Sci-Twi, Twilight's Sparkly Sleepover Surprise 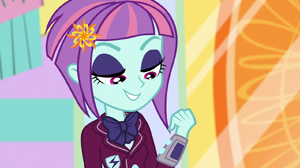 Retrieved from "https://mlp.fandom.com/wiki/Sunny_Flare?oldid=2163928"
Community content is available under CC-BY-SA unless otherwise noted.