Start a Wiki
Sunny Rays is a background Pegasus pony mare with a bright yellow coat, pink mane and tail with a lavender pink streak, pink eyes, and a cutie mark of three suns. She is unnamed in the show, but she is named in merchandise.

Sunny Rays first appears moving clouds at the beginning of Look Before You Sleep. Her coat color changes from pink to yellow across the two shots she is in.

She doesn't appear again until the season four episode For Whom the Sweetie Belle Toils. She—with a darker color scheme—is among the ponies at the award ceremony in Sweetie Belle's dream. In Equestria Games, Sunny Rays briefly appears—with a darker coat color—as a spectator of the titular event at the Crystal Empire.

In Twilight's Kingdom - Part 1, Sunny Rays—once again with a darker color scheme—appears very briefly in the auditorium when Discord and Lord Tirek appear.

Sunny Rays is named with a trademark symbol in the eighth wave of Playful Ponies, which states that she "has a lot of bright ideas. Her friends can always count on her to help them solve problems!"

In Enterplay's collectible card game, Sunny Rays is named on her card α #62 R, which lists the quote "Did you know there are over 150 ways to use clouds to solve common household problems?"

"Did you know there are over 150 ways to use clouds to solve common household problems?"
— Enterplay collectible card game α #62 R card of Sunny Rays 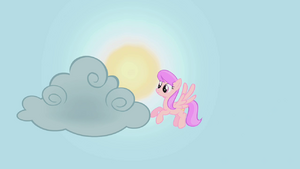 Retrieved from "https://mlp.fandom.com/wiki/Sunny_Rays?oldid=2111740"
Community content is available under CC-BY-SA unless otherwise noted.