Sunshine Petals is a female unicorn pony with a gold coat, light purple mane and tail, green eyes, and a cutie mark of two (sometimes three) flowers. She is unnamed in the show, but she is named in merchandise.

Enterplay collectible card game developer Trevor McGregor has stated on Facebook that a supposed Generic card #12 F of this pony is not real.[1]

Sunshine Petals first appears in the season four episode Rarity Takes Manehattan selling flowers in Manehattan. During the song Generosity, Rarity buys a flower from her to give to "Sourpuss".

Later, in the season five episode Made in Manehattan, Sunshine Petals watches the Midsummer Theater Revival organized by Applejack, Rarity, and Coco Pommel. She also listens to Twilight Sparkle's Cutie Mark Magic lecture at the School for Gifted Unicorns in The Cutie Re-Mark - Part 1.

In the season six episode The Gift of the Maud Pie, Sunshine Petals appears at the Manehattan flea market.

In the season seven episode Parental Glideance, Sunshine Petals appears watching the Wonderbolts. In season eight, she appears in The Washouts watching the titular stunt troupe. 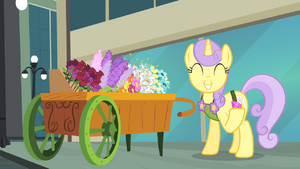