Sunshower Raindrops is a female Pegasus pony with a jasmine coat, tiffany blue mane and tail, medium turquoise eyes, and a cutie mark of three raindrops. She is unnamed in the show, but she is named in merchandise. She shares her design with Derpy and her color scheme with "Rainy Feather". Her name includes the name of fellow Pegasus mare Sunshower and as such is similar to those of G3 Earth pony mare Sunshower and G1 seapony filly Sun Shower.

Sunshower Raindrops appears in the show as a background pony. She makes her first appearance in Friendship is Magic, part 1 at the party that Pinkie Pie throws for Twilight Sparkle in Ponyville's library. In Feeling Pinkie Keen, she hovers behind the trailer alongside Derpy after a myriad of objects fall on Twilight Sparkle. She, along with Derpy, looks guiltily at the foreman after the accident.

Sunshower Raindrops is part of the weather team in Winter Wrap Up, and one of the ponies initially sent to retrieve the southern birds alongside Cloud Kicker and Rainbowshine, later joined by Sprinkle Medley. She also appears with a pale blue-violet coat knocking snow off a tree branch, and a pony with the design, eye color, and cutie mark of Sunshower Raindrops but the coat and partly mane colors of Orange Swirl and "Candy Mane" appears late in the episode in the line of Pegasi following Rainbow Dash to sweep away all of the snow and clouds.

In Hurricane Fluttershy, she is one of the ponies causing the first tornado's collapse; exhausted, she strays from her position and crashes into the pool below.

Sunshower Raindrops turns up as a cadet in Wonderbolts Academy and is partnered with Thunderlane as his wingpony. When Spitfire challenges the cadets about whether they thought they could be Wonderbolts, Sunshower Raindrops is the first one she turns to, and she visibly crumples once Spitfire stops looking. Later on, she saves Pinkie Pie from falling.

In Sunshower Raindrops flees from a twittermite swarm in one of Apple Bloom's nightmares Bloom & Gloom, helps prepare Ponyville for winter in Tanks for the Memories, attends the Grand Galloping Gala in Make New Friends but Keep Discord, helps Crafty Crate carry a sofa for Davenport in Slice of Life, appears at the Grand Equestria Pony Summit in Princess Spike, appears in Party Pooped, and appears in Ponyville's shared dream in Do Princesses Dream of Magic Sheep?

She also appears in the final group shot during Friends Are Always There For You in The Cutie Re-Mark - Part 2.

Sunshower Raindrops appears in the far background near the Castle of Friendship in The Crystalling - Part 1. In On Your Marks, she appears in the audience for Tender Taps' dance recital. In No Second Prances, she gossips with Caramel and Shoeshine before looking at Trixie in suspicion and flyiong away. She later appears in the audience for Trixie's magic show later that day. In A Hearth's Warming Tail, she helps decorate the Castle of Friendship during a Hearth's Warming Eve celebration while singing Hearth's Warming Eve Is Here Once Again and later enjoys the celebration during the reprise. In The Cart Before the Ponies, she appears as a spectator for the Ponyville Applewood Derpy during Derby Racers and also spectates the second Derby. In The Fault in Our Cutie Marks, she makes a background appearance in the audience spectating Gabby play baseball in Find the Purpose in Your Life. In Where the Apple Lies, she appears in a flashback behind a fruit stand at the Ponyville marketplace and subsequently in the audience for a surgery lecture at the Ponyville Hospital. In Top Bolt, she appears as a cadet at the Wonderbolt Academy flying with Orange Swirl.

In Celestial Advice, Sunshower Raindrops makes a background appearance attending the after-party for the Equestrian Pink Hearts of Courage medal ceremony for Starlight Glimmer and her friends in the Castle of Friendship. In Parental Glideance, she appears in the audience for the Wonderbolts showcase in Canterlot, flies outside the Wonderbolt Academy barracks as a cadet, and appears in a flashback as an adult spectating a podium ceremony with Princess Erroria for a race won by filly Rainbow Dash win in Cloudsdale. At the beginning of The Perfect Pear, she makes a background appearance at the Ponyville marketplace with an unnamed mare conversing with Cheerilee. In Fame and Misfortune, she appears flying through Cloudsdale with Rainbow Swoop and subsequently in the mob of angry ponies arguing as a result of the publication of the Mane six's friendship journal. In Triple Threat, she attends the Dragon Fire Flame of Friendship ceremony for Thorax and Ember in front of Ponyville Town Hall. In It Isn't the Mane Thing About You, she appears in line for the flower ponies stand at the Ponyville marketplace for Mares Day flowers. She subsequently makes a background appearance talking to Lucky Clover in Ponyville and again talking to Cheerilee with the same unnamed mare as in "The Perfect Pear" at the Ponyville marketplace.

In School Daze - Part 1, Sunshower Raindrops appears flying away from the School of Friendship during the school's Friends and Family Day as Ocellus accidentally crashes into it while transformed into a monster. In Grannies Gone Wild, she makes a cameo appearance flying through Flim and Flam's Las Pegasus Resort Hotel with an unnamed mare. In Horse Play, she appears in the audience for the school play at the School of Friendship. In The Break Up Break Down, she makes a background appearance walking through Ponyville with Berryshine during Hearts and Hooves Day. In Yakity-Sax, she appears in the audience for the Wonderbolts' show which is ruined by Pinkie Pie's poor yovidaphone playing, walking towards Ponyville Town Hall during an overhead shot, and decorating a tree for Pinkie Pie Appreciation Day. In The Washouts, she makes background appearances talking to Piña Colada in Ponyville, spectating the titular group's first show in Ponyville, flying in Ponyville almost colliding with Rainbow Dash as she desperately searches for Scootaloo, and attending the titualr group's second Ponyville show.

In The Beginning of the End - Part 2, she appears as part of King Sombra's mind-controlled army and engages the Mane six as they arrive at Canterlot's gates. In Common Ground, she appears in the opening newsflash in the audience of buckball fans doing the wave, and subsequently in the theater the newsflash is playing in. She subsequently makes more background appearances at the Appleloosa buckball tournament offering a bag of bits to Snails for an autograph, as a patron at the buckball Hall of Fame, and watching a game at the end of the episode. In She's All Yak, she appears during Fit Right In in the reused group shot from "The Cutie Re-Mark - Part 2" and in the circles of dancing ponies, dancing with Shooting Star. In Between Dark and Dawn, she appears in the audience for the pony version of Wicked. In 2, 4, 6, Greaaat, she appears in the audience for the buckball game between the School of Friendship and Princess Celestia's School of Magic where she also watches the halftime cheerleading routine. In The Summer Sun Setback, she appears as one of the pegasi in charge of controlling weather during preparations for the final Summer Sun Celebration in Canterlot, flying through the rainstorm created by Cozy Glow's sabotage before she eventually helps clean it up. She later appears in the audience for the aforementioned event. In She Talks to Angel, she makes a cameo appearance flying through Ponyville. In A Horse Shoe-In, she appears in the audience for Octavia Melody's concert with DJ Pon-3. In Growing Up is Hard to Do, she appears talking to Cherry Fizzy as they walk though Ponyville before being startled by the adult Cutie Mark Crusaders as they abruptly pass them. She later appears flying over the Appleloosa County Fair Animal Showcase in the buckballs stadium. In The Ending of the End - Part 2, she appears in Cloudsdale with the other pegasi as they isolate themselves from the Unicorns and Earth ponies. She later listens when Hyper Sonic convinces the Pegasi that unite with the other races in spite of their differences, which are exploited by villains and the windigos to divide them.

Earth pony appearances of Sunshower Raindrops include Lesson Zero, Simple Ways, It Isn't the Mane Thing About You, and Starlight the Hypnotist.

Sunshower Raindrops is one of many ponies seen in the establishing shot of Ponyville in My Little Pony Equestria Girls: Rainbow Rocks. In My Little Pony Equestria Girls: Forgotten Friendship, either Sunshower Raindrops or "Icy Rain" makes a brief cameo in the second establishing shot of Canterlot. In Spring Breakdown, she appears in Ponyville talking to "Cultivar", and again in the sky near the Castle of Friendship talking to Cloud Kicker.

In Starlight the Hypnotist, Sunshower Rainrops appears walking down a hallway in the School of Friendship. In Sundae, Sundae, Sundae, she attends the grand opening of the Sugarcube Corner Ice Cream Museum.

Sunshower Raindrops is a character in Gameloft's mobile game. Her in-game description states, "This helpful pony can be seen lending a hoof all around Ponyville. Need a sofa moved? Prepping for winter? Got a twittermite problem? Actually, scratch that: she's not too good with twittermites."

"We're wingponies, which means that we have one another's hindquarters no matter what. We look after one another, and make sure we're safe and stuff like that. Maybe one day we'll get to be full-fledged Wonderbolts. Hooves crossed!"
— The Wonderbolts Academy Handbook 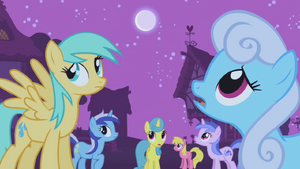