Surf and/or Turf is the sixth episode of season eight of My Little Pony Friendship is Magic and the one hundred and seventy-fifth overall. The title is a play on the phrase "surf and turf".

In this episode, the Cutie Mark Crusaders get sent by the Cutie Map to Mount Aris to help a young Hippogriff figure out where he belongs.

Michael Vogel stated on Twitter that the question of how Silverstream is able to transform at will into a seapony and back to a hippogriff is "clarified in a later episode,"[1] referring to this episode, which features the Cutie Mark Crusaders swimming underwater as seaponies.

Brian Hohlfeld was nominated for the Humanitas Prize for "Best Children's Teleplay" for his work on this episode.[2]

The episode begins with the Cutie Mark Crusaders excitedly bursting into Twilight Sparkle's throne room, having been summoned for their first friendship mission by the Cutie Map. The map calls the trio to Mount Aris, the home of the Hippogriffs. Twilight accompanies the three on their journey since she needs Silverstream's parents to sign a permission slip for her to go on a School of Friendship field trip.

During the Friendship Express ride to the Mount Aris train station, Apple Bloom recalls what befell the Hippogriffs as told to her by Applejack. Long ago, the Hippogriffs once lived happily on Mount Aris but were forced to flee to the underwater realm of Seaquestria when the Storm King attacked their home, using Queen Novo's Pearl of Transformation to transform into seaponies.

At Mount Aris, the Crusaders wonder what cutie mark-related problem they were summoned to solve, but Twilight points out that Hippogriffs don't have cutie marks. The Crusaders are unsure of where to start looking for their mission, but Twilight says they and whoever needs their help will find each other.

World of the Hippogriffs

Twilight and the Crusaders meet with Silverstream's brother Terramar, and the Crusaders are surprised to see him transform from a seapony to a Hippogriff. Terramar explains that, after the Storm King was defeated, some Hippogriffs came out of hiding and returned to live on Mount Aris while others remained as seaponies in Seaquestria. Queen Novo's Pearl of Transformation was then split into hundreds of fragments and distributed among her subjects so that they, including Terramar, could travel back and forth between the two realms.

Following the Storm King's defeat, the Mount Aris capital city of Hippogriffia was restored to its former glory, and Twilight and the Crusaders arrive in the middle of a weekly celebratory festival. As Twilight goes off with Silverstream and Terramar's father Sky Beak, Terramar shows the Crusaders around, and Sweetie Belle becomes particularly enamored with an area called Harmonizing Heights. When the Crusaders marvel at how Terramar has two great places to live, he says he can't decide which one to stay in, and the Crusaders realize this is the problem they were summoned to solve.

Terramar explains to the Crusaders that both Mount Aris and Seaquestria are great places to live, but he feels torn between the two because his father and sister live on land while his mother lives underwater. The Crusaders offer to help, listing the pros and cons of each place. Taken by the beauty and wonder of Harmonizing Heights, Sweetie Belle thinks Terramar should live on Mount Aris, but the others point out that they should visit Seaquestria before making such a decision. Twilight returns after getting Sky Beak's signature on Silverstream's permission slip, and they all go to Seaquestria together.

World of the seaponies

On the shores of Mount Aris, Terramar uses his pearl fragment to transform himself, Twilight, and the Crusaders into seaponies. Scootaloo becomes fascinated with the weightless sensation of swimming underwater, imagining that it must be what flying feels like. Terramar leads the others to his mother Ocean Flow's house in Seaquestria. While Twilight speaks with Ocean Flow about Silverstream, Terramar once again gives the Crusaders a tour. Scootaloo is completely in love with the underwater realm, but Sweetie Belle is unimpressed, preferring Harmonizing Heights.

Back on dry land, Twilight once again goes off with the Hippogriffs while the Crusaders help Terramar with his decision through song. Sweetie Belle sings about the beauty and serenity of Harmonizing Heights, and Scootaloo sings about the fun and excitement of Seaquestria. This drives an unexpected wedge between them, and Terramar ends up even more uncertain than ever.

"If you all can't even agree amongst yourselves, how am I supposed to make up my mind?!"
— Terramar

Because of their disagreement, Sweetie Belle and Scootaloo refuse to talk to each other, leaving Apple Bloom stuck in the middle. When Twilight returns, the Crusaders explain what happened, and Sweetie Belle and Scootaloo admit their fault in Terramar's struggle. Twilight believes that Terramar is making his dilemma harder than it has to be by forcing himself to choose. When Sky Beak and Ocean Flow appear to invite Twilight to more activities, Twilight expresses that this must be how Terramar feels all the time. Seeing the Hippogriffs and seaponies come together, the Crusaders get an idea.

On the outskirts of Mount Aris, the Crusaders find Terramar sulking by himself on a tree branch and apologize for making his decision even harder than before. They bring him to where the Hippogriffs and seaponies have come together for a picnic on the beach. Sky Beak and Ocean Flow apologize to Terramar for making him feel like he had to choose between his two homes and tell him he can keep going back and forth as he pleases. Terramar is overjoyed by this, and as he thanks the Crusaders for their help, their cutie marks glow to signify their completed friendship mission.

With their business at Mount Aris finished, the Crusaders invite Terramar to visit Ponyville someday, and he goes off happily with his parents.

Sweetie Belle: Somepony needs our help?
Apple Bloom: We're being called by the Map?
Scootaloo: Did I mention we're glowing?!

Apple Bloom: Then, in the Battle of Canterlot, when Applejack defeated the Storm King—
Twilight Sparkle: Wait, what? She told you she defeated him? By herself?
Apple Bloom: Uh, maybe she didn't say that exactly. But it makes for a better story.

Sweetie Belle: Woo-hoo! Yeah! Awesome! I love this!
Terramar: Uh, is she okay?

Apple Bloom: Did you say... "problem"?
Sweetie Belle: You have a problem?!
Scootaloo: Yes!

Ocean Flow: Both my children are so smart. Would you like to see their baby pictures?
Terramar: Mom!

Ocean Flow: Yoo-hoo! Princess! We're having a seashell-crafting circle. Care to join us?
Twilight Sparkle: Actually, we're right in the middle of—
Sky Beak: There you are! The flag-folding ceremony's about to begin!
Twilight Sparkle: Thank you, really. I've had a great time in both places today, but... [whispering, to Cutie Mark Crusaders] Wow. This must be how Terramar feels all the time.

Scootaloo: Something we forgot to add that both places have – family and friends who love you.

Sweetie Belle: I hope you come visit your sister in Equestria.
Apple Bloom: Yeah, come see us! You'll love it!
Scootaloo: Who knows? You might even want to live there!
[beat]
Scootaloo: Yeah, that was a joke. 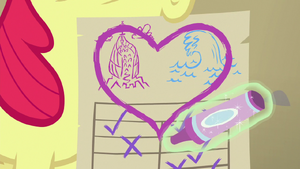 Surf and or Turf image gallery