Suri Polomare is a female Earth pony and the antagonist in the season four episode Rarity Takes Manehattan, appearing alongside her assistant Coco Pommel. She is named Buttonbelle in some merchandise.

Suri Polomare has a light pink coat with a purple mane and tail. Her cutie mark is of three colored buttons (purple, aqua and light yellow) in a triangular formation. She wears a two-tone blue crossed scarf and a headband holding up her mane in the back. She speaks with a soft but distinct upper-class Manehattan accent, similar to that of Applejack's Aunt and Uncle Orange.

During her takeover of the Hub Network's Twitter feed, Meghan McCarthy called Suri Polomare "a fave" due to Tabitha St. Germain's voice performance for the character.[2]

Suri meets Rarity when she's the last to arrive with her dresses at Prim Hemline's rehearsal. She is stated to have met Rarity before at a Ponyville knitting competition, although Rarity at first cannot put a name to her face. While backstage with Rarity, she takes a look at Rarity's dresses, complimenting her on her designs. Appreciating the material Rarity used to make the dresses, Suri asks Rarity for a swatch of the fabric to fix up some of her own dresses. Rarity happily obliges and gives her an entire roll of fabric.

The next day, Rarity shows up last to the event again. As Rarity peeks onto the stage, she sees Suri having her dresses judged by Prim Hemline. She then notices that Suri had completely duplicated her designs overnight with Coco Pommel's help, using the same fabric that she used. When confronted by Rarity about this, Suri explains that "it's everypony for herself in the big city".

When Rarity later rushes back to the plaza to thank Prim for the opportunity, Suri and Coco tell Rarity that Prim is "furious" and that she should stay away from her for a while. Once Rarity's friends turn up, it is revealed that Suri also told them that Rarity lost the competition. After Rarity accepts the defeat and leaves with her friends to see Hinny of the Hills, it is revealed that Suri lied to Rarity and her friends about the competition's outcome and that Rarity had indeed won. Coco states that the deceitful designer had hoped Rarity's failure to claim the prize would allow her to win first place.

Suri Polomare appears talking to S05E16 Unnamed Earth Stallion #8 several times in The Gift of the Maud Pie, twice in the Bridleway theater district and again across the street from Maud Pie and Pouch Pony.

Suri Polomare's human counterpart appears in My Little Pony Equestria Girls: Friendship Games as a student of Crystal Prep Academy. She first appears on the Crystal Prep bus ride to Canterlot High School, refusing to give a seat to human Twilight. At the welcome party for Crystal Prep, she dances next to Flash Sentry and briefly talks with Micro Chips. During ACADECA, she is paired with Upper Crust in the home economics portion, eventually losing to Pinkie Pie and Fluttershy. When Principal Cinch glares at her disapprovingly, she nervously drops the cake she and Upper Crust made onto the floor.

Before the Friendship Games' final event, she is among other Shadowbolts pressuring Twilight into releasing the magic from her pendant.

In My Little Pony Equestria Girls: Forgotten Friendship, her human counterpart briefly appears in Applejack's memories of the final event of the Friendship Games.

Buttonbelle appears in Hasbro's Friendship Celebration app. The app is the first time that she is simultaneously referred to as Buttonbelle and depicted with the same design as in the show.

Suri Polomare is one of the available playable characters in Gameloft's mobile game. She was added to the Android version of the game on April 30, 2014 before being removed a short time later. Her in-game description states "Suri Polomare is an aspiring fashionista who speaks softly, but could scheme and swindle the buttons off of any design!"

SURI POLOMARE is a fashion maven with a feisty temper. If she's in a mood, get out of her way! The process of creation stresses her out. When Suri doesn't get what she wants, she snaps. That's what happens when a pony's ego goes bonkers.

A mini-figure toy of Suri Polomare has been displayed at the 2014 American International Toy Fair.[4] The toy was released as part of the eleventh wave of mystery pack toys and collector cards and named Buttonbelle with a trademark symbol. The collector card states "BUTTONBELLE loves to laugh and tell jokes!" Cutie Mark Magic toys include a brushable of Suri Polomare, again named Buttonbelle with a trademark symbol. A miniature brushable figure of Buttonbelle is also included in McDonald's Happy Meal toyline from February to March 2016.

"Quiet! I pay an assistant to sew and get coffee, not talk. 'Kay?"
— To Coco Pommel, Rarity Takes Manehattan

"It takes some small-town fillies a while to learn it's everypony for herself in the big city, m'kay?"
— To Rarity, Rarity Takes Manehattan

"Hope you realize how fortunate you are to have me as a mentor. Now get me some coffee!"
— To Coco Pommel, Rarity Takes Manehattan

"Pretty clever how I convinced her to stay away from Prim, wasn't it?"
— About Rarity to Coco Pommel, Rarity Takes Manehattan 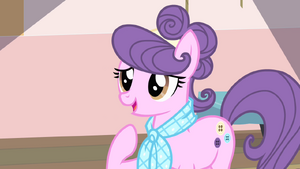 Retrieved from "https://mlp.fandom.com/wiki/Suri_Polomare?oldid=2133422"
Community content is available under CC-BY-SA unless otherwise noted.