Surprise is a female Pegasus pony and a member of the aerial acrobatics group, the Wonderbolts. She first appears in The Ticket Master, and she has a speaking role in Newbie Dash, My Little Pony Micro-Series Issue #8, and My Little Pony Annual 2017. She is not named in the show, credited only as "Wonderbolt 1" in Newbie Dash, but she is named in merchandise and other media.

Surprise has the same coat and mane colors and partly cutie mark as Lauren Faust's concept art of Pinkie Pie, based on a G1 Pegasus mare also named Surprise; as the Pegasus mare Breezie from the fifth and fifteenth waves of mystery pack toys and collector cards; and as the Heather Nuhfer Pegasus mare from the IDW comics' Friendship is Magic Issue #8. Surprise usually has the same mane and tail style as Blaze, "Nightingale", and S05E15 Unnamed Pegasus Mare #1 and the same tail style as "Amelia Airhoof", but in some IDW comics, instead has the same mane and tail style and eye color as in Faust's concept art. Surprise, along with Soarin and as well as Dane Tee Dove, Lady Gaval, and Tall Order, was to appear in Friendship is Magic, part 1.[1]

Surprise, with her mane a darker shade of yellow, appears as one of the Pegasi fighting against a monstrous Spike in Secret of My Excess, alongside Blaze and High Winds. Spike traps her and her fellow Wonderbolts inside a water tower. Near the end of the episode, when they're finally freed, Surprise trembles with fear before striking a heroic pose and flying off with Blaze and High Winds.

Surprise makes a background appearance in Rarity Investigates! In Newbie Dash, Surprise's eyes are revealed to be raspberry, and she has a speaking role in which she laughs at Rainbow Dash after she fails to impress the Wonderbolts. Surprise gives Rainbow a nickname "Rainbow Crash", and she reveals her Wonderbolts nickname as "Slowpoke".

In season seven, Surprise appears at a Wonderbolts autograph session in Parental Glideance and flying with other Wonderbolts in Marks and Recreation and Secrets and Pies.

In The Ending of the End - Part 2, Surprise and the other Wonderbolts take part in the final battle against Queen Chrysalis, Lord Tirek, and Cozy Glow. In The Last Problem, Surprise flies with the Wonderbolts during Twilight's coronation ceremony.

Surprise appears in a Panini My Little Pony magazine story that is titled Les surprises de l'amitié in the French magazine and Das Überraschungsfest in the German magazine.

Surprise appears in Twilight Sparkle: Teacher for a Day.

SURPRISE is always appearing out of nowhere! It's off-putting. Her nickname is Slowpoke—but what's in a name anyway?

A miniature collectible of Surprise, called simply "Wonder Bolts pony", is included in the Miniature Collection's Cloudsdale Set with Rainbow Dash and Gilda the Griffon.[5]

Surprise appears on multiple posters, including a 21-character poster and the fan-designed WeLoveFine art print "Everypony".[6]

A list of Wonderbolts on page 34 of Little, Brown's My Little Pony Friendship is Magic official guidebook My Little Pony: The Elements of Harmony includes the name "Surprise" without specifying Surprise's identity.[7][8]

Surprise is identified on her Enterplay collectible card game card α #50 R, which gives her the description "One of the more elusive members of the Wonderbolts, Surprise has never been seen in public without her uniform on. Her teammates all say she is an absolute blast to hang out with."[note 1] In the game's Crystal Games expansion set, card #45 R gives Surprise the description "Surprise works well with the rest of the Wonderbolts during performances, but the rest of the time there's no telling WHAT this mare is going to do next!"

Surprise appears in various promotional images used online,[9] including by Hasbro[10] and by the Hub Network.[11][12][13] 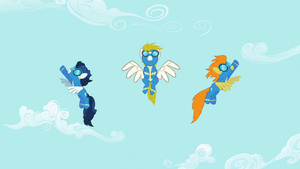