Svengallop is a male Earth pony and the antagonist of the season five episode The Mane Attraction. He is Coloratura's bossy and flamboyant former manager who exploits her for personal gain.

His name and character are a play on Svengali from George du Maurier's 1895 novel Trilby.[1] "Ruben Kincaid",[2] "Glen Garry Glen Ross", "Deal Maker", "Greedy", "Deal Breaker", and "Corrupt" are listed in a notebook from when Amy Keating Rogers was trying to come up with a name for him.[3] His original name in development was "Pony Baloney",[4] which was changed for being too obvious;[5] this name is similar to "Pony Bowl-ony", one of Mr. Kingpin's unused would-be names. Meghan McCarthy submitted the idea of "a Svengali-type name", then an email exchange between Amy Keating Rogers and Aaron Rogers resulted in Svengallop.[6]

The original draft of The Mane Attraction depicted Coloratura outright firing Svengallop, rather than Svengallop voluntarily abandoning her in the final draft. According to Amy Keating Rogers, his continued shady dealings in Manehattan ultimately end in failure after the events of the episode.[7]

Svengallop appears alongside Countess Coloratura and her entourage in the season five episode The Mane Attraction when they arrive to Ponyville for the Helping Hooves Music Festival charity event. He assumes an overbearing role in Coloratura's career, disapproving of her interactions with "common" ponies. During his time in Ponyville, Svengallop makes numerous unreasonable demands to Pinkie Pie without Coloratura's knowledge, and he threatens to pull Coloratura out of the festival if Pinkie does not comply.

Applejack attempts to convince Coloratura of Svengallop's unscrupulous managing, but Coloratura is skeptical. Twilight Sparkle records Svengallop's backdoor dealings with Pinkie Pie, and Coloratura finally realizes the truth, outraged that her manager has been using her fame to manipulate others. When confronted by the furious singer, Svengallop tells her that the show will fall apart without him and leaves in a huff.

In the chapter book Beyond Equestria: Pinkie Pie Steps Up, Svengallop appears in the penultimate chapter, having orchestrated a revenge plot against Coloratura with his sister Crownpiece to ruin Coloratura's career.

Svengallop is a character in Gameloft's mobile game.

Enterplay collectible card game Marks in Time #64 U lists Svengallop's name with a trademark symbol and states, "Svengallop knows what he wants, knows how to get it, and thinks he deserves all of it. That's a dangerous combination."

SVENGALLOP is Countess Coloratura's scheming former manager. Nopony is fooled by his flashy flair and wily words anymore. It's clear he's totally out for himself. If Svengallop says he'll make a pony a star, tell that pony to pick up her hooves and hightail it.

"Clear the way! Stand back! Keep your hooves and tail to yourselves!"
— The Mane Attraction

"Now that's how you make an entrance! Big, bold, absolutely stunning! Though it was muddied a bit with your interaction with that dusty farmpony."
— The Mane Attraction

"Oh, my shining star! Thanks to the sparkling costumes, dazzling choreography, and brilliant vocal effects that I designed, your performance was spectacular, Countess Coloratura!"
— The Mane Attraction

"You know the drill! Deliver, or the diva ditches your dippy charity!"
— The Mane Attraction

"I made you somepony! What can you even do without me?"
— The Mane Attraction 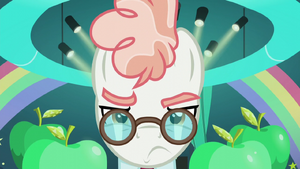 Retrieved from "https://mlp.fandom.com/wiki/Svengallop?oldid=2052720"
Community content is available under CC-BY-SA unless otherwise noted.