Swarm of the Century is the tenth episode of the first season of My Little Pony Friendship is Magic. In this episode, a swarm of pests called parasprites find their way into Ponyville, causing chaos and threatening to ruin Princess Celestia's visit to the town.

This episode was originally called "Pied Piper Pinkie", but was then changed following a later story meeting.[2]

According to Lauren Faust, Swarm of the Century was "initially conceived as just a story about a plague of locust-like creatures, but the parallels to Tribbles became apparent pretty fast. I'm a huge Star Trek dork," she wrote, "so we went with it."[3] Writer M. A. Larson added that he had Gremlins in mind when writing the episode.[4]

A small part showing Pinkie trying to lure the parasprites away from Ponyville with her instruments reappears in Cakes for the Memories.

The episode begins in a field near the Everfree Forest, where Fluttershy is gathering flowers for Princess Celestia’s visit to Ponyville. A small creature that Fluttershy has never seen before appears. She offers it an apple, but it devours a bucketful of apples despite its small size. Fluttershy is surprised, but she adopts the creature and plans on showing it to her friends.

The rest of Ponyville is also preparing for the Princess's arrival. Twilight Sparkle tells Spike that the library has to be spotless, and everything has to be perfect. Twilight goes to check on the rest of the preparations. In Sugarcube Corner, she catches Pinkie Pie eating cakes and other sweets that Mr. and Mrs. Cake have made for the Princess. Pinkie Pie says that she is sampling the sweets to ensure their quality. Fluttershy enters the bakery to show Twilight and Pinkie Pie the creature she found, but inexplicably, two more of the same creatures pop out. Twilight adopts one of them so Spike can have a companion. Pinkie Pie, however, reacts in disgust, calling them "parasprites." She says that she needs a trombone and leaves the bakery.

In Carousel Boutique, Rarity is putting the finishing touches on Rainbow Dash's elaborate dress. Twilight enters and praises Rarity's dresses that she designed specially for the royal visit. When Twilight takes out her parasprite, she discovers that she is carrying not one, but three of them. Rarity and Rainbow Dash gladly adopt the extra parasprites.

The next day, Twilight Sparkle and Spike are shocked to find their house filled with parasprites. The parasprites are impossible to control and they freely destroy books and parchments. Meanwhile, in Rainbow Dash's home in Cloudsdale, Rainbow Dash's parasprites cling to her body, driving her mad. Rarity is fond of her helpful swarm until she witnesses the parasprites’ unsightly method of reproduction; namely, coughing up/vomiting new parasprites. Even Fluttershy has lost control over the swarm in her house. Twilight realizes that if the situation isn’t handled immediately, Celestia's visit will be a disaster. Meanwhile, Pinkie Pie is busy gathering an assortment of musical instruments, including a harmonica, a banjo, and a pair of maracas. Her friends assume she is just being random and disregard her efforts to collect more instruments.

Applejack directs her friends in an attempt to round up the parasprites. The ponies succeed in driving the parasprites into the Everfree Forest. Unfortunately, when the friends head back to Fluttershy's house, a dense swarm of parasprites bursts out. Fluttershy admits that she had kept a parasprite because she couldn't help herself. Rainbow Dash steps up to the plate by creating a tornado that sucks in the parasprites. Everything is working until Pinkie Pie walks up to them, sporting a pair of cymbals. The cymbals are drawn into the tornado; Rainbow Dash tries to dodge them, but they break her concentration and the tornado falls apart. The parasprite horde flies into Ponyville and the friends run after them, ignoring Pinkie's attempt to explain why she was gathering the instruments in the first place.

The ponies watch in horror as the parasprites begin to eat all the food in town. Twilight casts a spell to stop the parasprites from consuming food. However, the parasprites start devouring everything that isn't food: signposts, lamps, Rarity's dresses, and even the words from Twilight's books. Twilight brings a parasprite to Zecora's house in the Everfree Forest, hoping the zebra can find a solution. Zecora easily recognizes the parasprite, but even she doesn't know how to get rid of them. Twilight returns to Ponyville and sees that Princess Celestia is approaching the town. Frantic and almost hysterical, Twilight begins to formulate a plan to build a replica of Ponyville next to the real one before the Princess's arrival, but Celestia's royal procession appears on the horizon.

When all seems lost, Pinkie Pie shows up with a one-pony band, playing the instruments she gathered. Twilight suspected this to be another one of her games, but she and her friends watch as the parasprites become attracted to the music and follow the "Pinkie Pied Piper" out of Ponyville.

At the town's outskirts, the friends meet Princess Celestia, who thinks the orderly, bouncing parasprites are part of a parade in her honor. She informs Twilight that she needs to cancel her Ponyville visit to deal with an infestation of some "incredibly bothersome creatures" in Fillydelphia. Celestia asks Twilight if she would like to give a report on friendship before she leaves. Twilight tells her mentor that the solutions to one's problems can come from unlikely sources, and that it's a good idea to listen to your friends' opinions and perspectives, even if they don't seem to make any sense. Commenting on how impressed she is with Twilight Sparkle and her friends, Celestia takes off.

The friends apologize to Pinkie Pie for not listening to her. Twilight tells her that she is a great friend even though they don't always understand her, and thank her for saving Ponyville. The friends walk back to Ponyville, and the episode ends when Pinkie Pie comically plays a trombone to express their dismay at the ruins.

Spike: You know, this would be an awful lot easier if there weren't two of us here getting under each other's feet.
Twilight Sparkle: Great idea. You clean, I'll go see how everyone else's preparations are coming.
Spike: Or maybe I should... [groan]

Twilight Sparkle: You can't hang a banner that says "Welcome Princess Celest". Take it down and try again!

Pinkie Pie: I, Pinkie Pie, declare that these treats are fit for a king, or a queen, or a princess!

Fluttershy: I tried everything I know. I tried begging, and pleading, and beseeching, and asking politely, and...

Rainbow Dash: Time to take out the adorable trash!

Twilight Sparkle: Pinkie Pie, what have you done?
Pinkie Pie: I've lost a brand new pair of cymbals, that's what I've done.
Twilight Sparkle: Will you forget about your silly instruments for one second? You're ruining our efforts to save Ponyville.
Pinkie Pie: Me? Ruin? I'm not the ruiner, I'm the ruinee! Or is it ruinness? Ruinette?

Rainbow Dash: Hey. It worked. They're not eating the food anymore...

Rarity: Oh no. If they get inside my store... Every pony for herself!

Rarity: My outfits! Go on, shoo! Get out of here. Naughty! Naughty! AAH! AAH!
Pinkie Pie: I'll save you!
Rarity: AAAAAAAAAAH!

Zecora: Oh, monster of so little size! Is that a parasprite before my eyes?!
Twilight Sparkle: I don't know! Is it?
Zecora: Tales of crops and harvests consumed. If these creatures are in Ponyville...you're doomed.

Twilight Sparkle: Okay, here's the plan. Rainbow Dash, you distract them.
Rainbow Dash:(being attacked by parasprites) YAAAAAAAEEEAAAA!
Twilight Sparkle: Good. Everyone else, we need to build an exact copy of Ponyville right over there. We've got less than a minute. [gasp] Zecora was right, we're doomed.

Princess Celestia: I'm so proud of you, Twilight Sparkle, and I'm very impressed with your friends as well. It sounds like you're all learning so much from each other...

Twilight Sparkle: You're a great friend... Even if we don't always understand you.
Pinkie Pie: Thanks, guys. You're all great friends, too... even when I don't understand me...
Twilight Sparkle : You saved my reputation with Princess Celestia and, more importantly, you saved Ponyville. [pause] Or not... 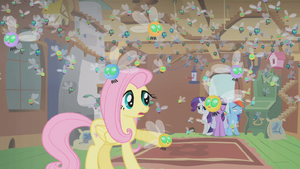 Swarm of the Century image gallery