Sweet Apple Acres is shown for the first time in Friendship is Magic, part 1. It has a large apple crop, which Applejack tries to harvest by herself in Applebuck Season. Applejack and Apple Bloom sell apples in the Ponyville marketplace in Call of the Cutie. Other crops and products include:

Applejack's pet dog, Winona, helps Applejack with herding in multiple episodes, such as Applebuck Season. In The Show Stoppers, the Cutie Mark Crusaders feed pigs at Sweet Apple Acres in one of their attempts to get their cutie marks. In Owl's Well That Ends Well, Spike goes to a chicken coop at Sweet Apple Acres to obtain a chicken feather. In Sisterhooves Social, Applejack and Apple Bloom work together to herd sheep into a pen. In The Last Problem, Winona is revealed to have had three puppies in the future.

In the film, the Rainbooms rehearse their counter-spell song against the Dazzlings at the human world's Sweet Apple Acres. Rarity also tries on various outfits there for the upcoming Battle of the Bands.

The human world version of Sweet Apple Acres is seen in the Rainbow Rocks short "A Case for the Bass". This version looks more like a house than a barn. Granny Smith has a garage sale here in which she accidentally sells Applejack's bass guitar to Flim and Flam.

When Midnight Sparkle opens a dimensional rift to Equestria, Sweet Apple Acres can be briefly seen.

In Epic Fails, Pinkie Pie and Applejack recall their most embarrassing moment of burning pies in the oven at Sweet Apple Acres, triggering the smoke detectors and sprinklers.

In Five to Nine, Applejack performs the titular song while doing her chores at the farmhouse before cleaning up the barn and preparing it for hoedown. In the Applejack ending of Fluttershy's Butterflies, Applejack takes Fluttershy to Sweet Apple Acres to show her the chickens to help her prepare for her school play audition. In the Applejack ending of Driving Miss Shimmer, Applejack and Granny Smith allow Sunset Shimmer to use their family truck practice for her driving test which they show to her in their barn.

In the second season, Applejack appears cutting down one of her apple trees at the farm to make wood to work on Rarity's dressing room. In Festival Looks, Applejack shows off her outfit for the Starswirled Music Festival outside the farm's chicken coop for a video call hosted by Rarity.

In Rollercoaster of Friendship, the Apple siblings appear stomping on apples to make apple sauce in the barn, as Granny Smith supervises.

The Sweet Apple Acres in Equestria briefly appears when Sunset Shimmer, Twilight Sparkle and Rainbow Dash go through a portal to Equestria.

The farm is the main location in The Cider Louse Rules, with Twilight helping the Apples plan a defense against Flim and Flam.

In My Little Pony: Friendship is Magic Issue #31, Sweet Apple Acres gets a plaque for being the first "residential" building of Ponyville. In Night of the Living Apples, the farm falls under the control of apples animated by dark magic, forcing Twilight and her friends to confront them. My Little Pony: Friends Forever Issue #27 briefly features the first apple tree ever planted in Sweet Apple Acres.

In the chapter book Applejack and the Honest-to-Goodness Switcheroo, Sweet Apple Acres is named as a finalist in the Best Orchard of Equestria contest, where the winner gets to be the exclusive apple supplier for Canterlot Castle and gets an extra plot of land. In the end, Sweet Apple Acres wins the award.

"'Rustle up' some fun with this APPLEJACK'S SWEET APPLE BARN playset! Your pretty blond pony figure has all kinds of work to do on her farm and she needs your help to do it. Pick an 'apple' from the 'tree' and 'carrots' from the 'garden' to put into your wagon accessory. Then, attach your APPLEJACK pony figure to the wagon and swing the barn doors open so she can 'pull' it all right inside. Once chores are done, the kitten and rooster accessory friends are certainly going to want to go for a 'ride'! Use the 'bucket' and 'watering can' to take care of your 'crops' and then spin the weather vane to see how the 'wind is blowing'. Farm living is tons of fun when you have a pal like your APPLEJACK pony figure to share the 'work'! Playset comes with 1 pony figure and kitten, rooster, wagon, hay bale, watering can, bucket, hat, saddle, 2 carrots, apple, shovel and rope accessories."

A Sweet Apple Acres barn playset was released in 2015 as part of Hasbro's Friendship is Magic Collection. The playset comes bundled with mini-figures of Granny Smith and Crimson Gala.[4] "Welcome to Sweet Apple Acres!"[5] 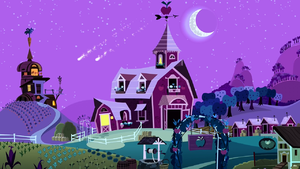