Sweet and Elite is the ninth episode of the second season of My Little Pony Friendship is Magic and the thirty-fifth episode overall. Rarity visits Canterlot and enjoys socializing with the elite. She neglects the dress she had planned to complete for Twilight Sparkle's birthday and chooses to attend a Canterlot garden party rather than Twilight's birthday party. When Rarity's friends move the party to Canterlot, Rarity tries to mingle with her friends and the high-class ponies at the same time.

Princess Celestia gives Rarity a guest room in Canterlot's palace after being asked to by Twilight. Rarity is pleased with her accommodations.

"I may have been born in Ponyville, but I am a Canterlot pony at heart."
— Rarity

Rarity and Opalescence have tea together. Rarity says that she is "a Canterlot pony at heart", and to express her gratitude towards Twilight, she decides to sew her a new dress for her birthday, which is later that week. Jet Set and Upper Crust, a posh couple, admire Rarity's hat but lose interest when Hayseed Turnip Truck recognizes her from Ponyville. Insulted, Rarity returns to her room to design Twilight's dress.

Rarity meets Fancy Pants, a sophisticated unicorn. He becomes eager to associate with her when she reveals that she is staying at the castle. He offers her an exclusive box seat at the Wonderbolts Derby.

"Staying at Canterlot Castle, and she knows the Pegasus training the Wonderbolts. I told you all this was an important pony."
— Fancy Pants

In her room, Rarity debates whether to go to the derby. If she does, she will develop social connections in Canterlot but lose time to work on Twilight's dress. She eventually decides to attend. At the derby, Fancy Pants's guests ignore her until they learn that she is staying in the castle. To their surprise, she bets correctly on the winner of the race. When asked how she did so, she lies and tells them that Rainbow Dash is the Wonderbolts' trainer, convincing the guests that Rarity is distinguished. She swiftly gains status and popularity in Canterlot. However, Opal is disappointed by her neglect of Twilight's dress.

In the song Becoming Popular (The Pony Everypony Should Know), Rarity sings about her desire to be popular and influential. She attends an art exhibit, an auction for a vase, a dinner party, an opera, a party on Fancy Pants’s yacht, and a ceremony for an airship’s maiden voyage.

Rarity accepts an invitation from Jet Set and Upper Crust to the Canterlot garden party, which she describes as a major social event second only to the Grand Galloping Gala. She writes to her friends in Ponyville, saying that she will miss Twilight's birthday party because Opal is sick.

Applejack, Fluttershy, Pinkie Pie, Rainbow Dash, and Twilight unexpectedly arrive in Canterlot. They arranged for Twilight's birthday party to be held in Canterlot so Rarity can attend. Rarity hurriedly drenches Opal in water to make her look ill. To Rarity's surprise, Twilight is pleased with her unfinished dress.

The Canterlot garden party takes place just outside the hall where Twilight's birthday party is held. Rarity manages to alternate between both. When she reenters Twilight's party with a croquet mallet in her mouth, it becomes obvious that she was at the garden party. However, Twilight assumes that Rarity was mingling with the elite to promote her boutique for the upcoming Grand Galloping Gala.

"All of those ponies look so posh. And with the Grand Galloping Gala coming up, I bet you could totally get some of them to buy your dresses. Very smart!"
— Twilight Sparkle

Rarity's friends make a mess of the garden party, oblivious to the disgust of the Canterlot elites. Pinkie's party cannon explodes confetti while Twilight blares music on the gramophone. Rainbow Dash knocks off Lyrica Lilac's wig with her croquet mallet. Fluttershy, sitting on a tree branch, feeds some birds who scatter feathers on the guests. Pinkie Pie messily devours the cake, Applejack weeds the garden and splatters mud everywhere, and the party guests watch Twilight dance terribly.

When asked about her dress, Twilight tells Fancy Pants that Rarity made it and that Rarity is from Ponyville. Rarity begins to walk away from her friends, but she changes her mind and declares them her best friends and the most important ponies she knows. Jet Set and Upper Crust laugh, but Fancy Pants compliments Rarity's "charmingly rustic" friends. After he applauds Twilight's dress, Jet Set and Upper Crust change their minds. Rarity avoids them and introduces Fancy Pants to her friends. Back at the castle, Princess Celestia shows up and hears Rarity's friendship report in person. Rarity says that no matter where you are, you should never forget your home and friends.

Rarity: ...and then I said, “Puh-lease, that isn't a hat, darling, that's a natural disaster that somehow landed atop your head!"
[ponies laugh]

Rarity: [hushed] I need to use the little fillies' room!

Applejack: How come y'all aren't doing any gardening? This is a garden party, isn't it? 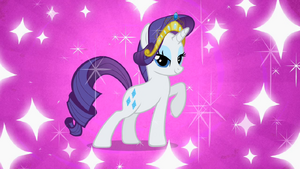