A stay in Canterlot Castle

View of Rarity and Princess Celestia from a distance.

Princess Celestia is as excited as Rarity.

A glorious bedroom in the castle!

Opal makes herself right at home.

I just don't know what to say.

What a strong pony you are, Snails' brother.

"I'll leave you to get settled."

Anything for the Princess.

Nopony ever thanked Princess that much before.

Rarity seems to be in a good mood today.

One step closer to becoming Spiderpony.

Oh, why did I bring this?

That's quite a lot Rarity.

The lovely city of Canterlot.

Rarity and Opal having tea.

Despite being a grumpy cat, Opal is adorable.

Rarity thinking of what to make for Twilight.

That's quite a gorgeous dress she has.

About to drink the tea.

Nothing, just wiping this off.

Pardon for the interruption of drinking your tea.

"Where did you get that simply Marvelous chapeau?"

Rarity knows something bad is going to happen.

Ah! Where did he come from!?

The ponies look on, to the scene unfolding.

I think we just better leave.

Well, yes, but we'll improvise that.

You're not helping Hayseed Turnip Truck!

Rarity's original dress design for Twilight.
Add a photo to this gallery

Fancy Pants...the most interesting stallion in the world

Both of them looking away...

And now he is picking it up

Rarity picking her stuff up

"Hmm, a pony with expensive tastes, I see?"

The aura around the bag transitions from Fleur's to Rarity's color.

Fleur Dis Lee being too busy with being appealing.

Rarity being fabulously cute.
Add a photo to this gallery

Rarity has the best designs.

Not sure if serious..

Please come on in, Rarity.

Our world is crumbling!

The derby is about to start

Woah! Those are the Canterlot Elite?

Race is about to start.

The Wonderbolts ready to race...Wait. Is this Earth Pony standing on a cloud?

and to the right

And it's Fleetfoot by a nose!

"My friend Rainbow Dash talks about her all the time. ..."

"She says what Fleetfoot lacks in size, she makes up for in speed."

Rarity, getting crowded by Fancy Pants and the other ponies.

Lying is not easy

Rarity has a bead of sweat as she is about to lie.

Making sure she isn't sweating

Rarity telling a story to the fancy ponies 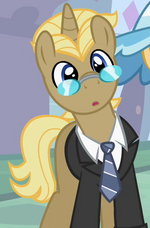 Rarity sure is enjoying the compliments.

Ah,where did you come from?

It'll be a disaster if you don't come..

You know how much this means to me?

Not very happy about the sudden interruption.

No, you simply must come to mine!

Why can't I resist those faces?

Um..well what can I say?

What did I get myself into?!

No, this angle is better.

Element of Harmony crown with a blue jewel?

Taking off to the world of the Canterlot elite

Rarity with the most amazing hairstyle yet!

Of course, the elite would attend the most sophisticated of art galleries—modern.

A painting that combines elements of Salvador Dalí paintings.

So Rarity IS French!

Auctioning for this very Historic Vase

Those bright eyes could only mean she had spotted something very valuable.

All bets are on.

The many sides of beautiful Rarity.

The gala dress came back and it is repaired!

On a Fancy yacht, well it is Fancy's yacht.

Rarity among other Canterlot ponies.

Can you spot Derpy? 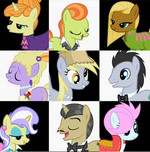 It's the dress from her Gala fantasy

Get to work!
Add a photo to this gallery

"I haven't forgotten anything."

"I must get back to Ponyville."

"Yours, Jet Set and Upper Crust."

Rarity is just so happy... she can see us!

The seam mistress cannot contain herself!

....she hugs poor porter. Signs of Generosity at its best. :)

"But if I go I'll miss Twilight's birthday."

"My new reputation in Canterlot as a very important pony."

Ooh, how will I ever decide?

"Its just too important!"

Ahh! So much work to do! So much stress!

All of Rarity's stuff along with Opal.

"I do hope you understand."

"I will need some unpacking them."

Wait a minute. Is that pony Snails' cousin?

"What do you think, too much?" I think I'm going to explode from Rarity's beyond super cuteness.

"You're right, too little."

Warning: may lead to death by cuteness.

Welcome back from your fainting spell!

Who wouldn't want to wake up to this?!

Rarity is not pleased that her friends made her faint.

What are you all doing here?

"What are you all doing here?"

So..I asked Pinkie if it was all right to move everything here.

"So you wouldn't have to miss it!"

"Balloons are super easy to pack."

"I don't know what to say, Twilight."

"How about you start by saying what you're doing in that fancy getup?"

"I always put on something."

"Cheers her right up!"

..Oh, and where this poor dear?

Opal, getting ready for a nap.

..Wait, why is there magic surrounding me?

You're not really going to right Rarity...?

"She's resting on the bed."

You won't believe what I've been through this week!

"It's the perfect dress for my birthday party!"

Twilight wants to hug us! yay!

The castle ballroom is decked out for the birthday party.
Add a photo to this gallery

" I mean, where did you find the time to put up all these decorations?"

Hope they didn't see me!

I should be there.

Forced to make a funky face.

Throwing Twilight up in the air.

The cake is not a lie anymore.

Fluttershy and Applejack with cake on their faces.

But, Pinkie, you're the one who said that the only thing that should be rubbed in anyone's face is chocolate cake!

Great...Rarity got frosting on her dress and hat.

Oh well, it could have been worse.

After throwing cake, they sit and laugh.

Rarity and Rainbow Dash having a blast.

"No reason I can't at least make an appearance."

Off she goes to the garden party.

We all know who this awesome pony is.

The band on stage.

She's got flowers in her tail

"I wouldn't have missed this for the world!"

Somewhere in space a supernova is occurring because Rarity is being too cute.

"Well, all this talk about cake has made me hungry."

And they won't notice me going back and forth.

Rainbow Dash being adorable for a change.

Uh..I'm sure they won't notice I'm gone for a minute.

Rarity "Derping" due to not liking the taste of an hors d'oeuvre dipped in chocolate.

Hey look over there!

"I think I left the bathwater running in my suite."

It's hard to be at two places at once.

Is that Princess Celestia?

"Use the little fillies' room!"

"Can I get anypony more punch?"

"Uh, what's with the croquet mallet?"

Oh, well would you look at that...

"you were such a savvy businesspony!

"All of those ponies look so posh."

Looking out at the party going on.

"I bet you could totally get some of them to buy your dresses."

"So that's exactly the reason I didn't tell you."

"You should totally go over there and mingle!"

"You really are the best friend a pony could ever ask for."

"If we check out the party too!"

"Let's show them how to party!"

"Ponyville style!" Rainbow is not lying when she says that.

Arriving to the madness.

Those are Daleks, Brigadier!

They finally love me!

What is Fluttershy doing!?

Hey...why are you just standing around?

What? Don't you want some cake, too?

Gardening at a Garden party?

While everypony backs away very slowly.

NOTE: Growing up somewhere doesn't mean that you're aware of all its customs.

Oh Punch, you're the only one that understands me!

I don't believe it.

Rarity wondering- "I made that dress."

I think she's partying too hard and is now dangerously close to straining something.

Twilight is not lying when she's sticks her tongue out.

Soaked by the punch Rarity spat out.

"On the other side of the room."

No, not in a moment how about right now.

Everypony is gathering around.

Now they all know.

Rarity being asked a question.

"You know these ponies?"

Rarity can hear what they're thinking.

Rarity can feel her friend's feelings.

Now what am I going to do!!

Twilight smiling at Rarity, in the most adorable way of course.

Is Rarity doubting us?

Rarity walking to the other side.

Twilight is wondering why Rarity is walking to the other side.

These ponies are alright.

Twilight smiling up at Fancy Pants.

Just exploded from this cuteness!

"Mmhm, I dare say every mare in Canterlot will be wanting one."

Rarity overjoyed at Fancy Pants's acceptance, while the dude with the top hat looks surprised.

Uh, you're in my space and I don't like that.

Ok, now you're just scaring me.

Now as you were saying!

"How about you introduce me to your friends?"

Don't look now Rarity but guess who's behind you.

"No matter where you go in life."

Ponyville shines bright as a beacon of hope as Rarity explains what she's learned.

Maybe we should help...
Add a photo to this gallery
Retrieved from "https://mlp.fandom.com/wiki/Sweet_and_Elite/Gallery?oldid=1933247"
Community content is available under CC-BY-SA unless otherwise noted.