Sweet and Smoky is the ninth episode of season nine of My Little Pony Friendship is Magic and the show's two hundred and fifth episode overall.[1]

When Spike and Fluttershy go with Smolder to the Dragon Lands to help cheer up her sensitive brother, they find out that the dragon eggs aren't hatching.

This episode aired on May 16, 2019, on Cartoonito in Italy, nine days ahead of its scheduled premiere on Discovery Family.[2]

Smolder enters the Teachers' Lounge at the School of Friendship and asks Headmare Twilight Sparkle for a week off from school. She explains that her "sweet" and "sensitive" brother has been having a hard time in the Dragon Lands ever since she left home to attend school. Twilight is concerned about Smolder traveling to the Dragon Lands by herself and missing so much class, but Spike suggests making it a "kindness field trip" so that she receives school credit and offers to accompany her.

When Smolder also mentions that it is dragon hatching season in the Dragon Lands, Fluttershy eagerly volunteers to come along as well in order to see the newly-hatched baby dragons. Twilight permits this—on the condition that Fluttershy submit a report about dragon-hatching when she returns.

When Smolder, Spike, and Fluttershy arrive in the Dragon Lands, Spike thinks of several ways to cheer up Smolder's brother, but Smolder says simply accepting him for who he is will help a great deal, and Spike looks forward to meeting him. While Smolder goes to find her brother and Spike knits a comfort blanket for him, Fluttershy goes to see the dragon eggs. At the egg-hatching grounds, she meets with Dragon Lord Ember, who explains that the eggs are mysteriously not hatching. Fluttershy offers to help her figure out the cause and welcome the baby dragons into the world when they hatch.

When Spike finishes knitting the blanket for Smolder's brother, Garble and his teenage dragon friends arrive. As always, the older, taller dragons tease Spike for his diminutive size and pony-like sensitivity, burning the blanket in the process with their laughter-induced fire breath. When Smolder returns and greets Garble with a special handshake, she reveals that Garble is her brother, much to Spike's shock. According to Garble's friends, Garble has been hiding and moping around ever since Smolder left for school, but Garble vehemently denies this.

When Garble starts pushing Spike around, Smolder warns him not to give Spike a hard time, mentioning that Spike came to the Dragon Lands to hang out with him. At Smolder's insistence and much to his annoyance, Garble agrees to let Spike tag along, earning him ridicule from his friends. As Garble heads to the lava pit, Spike expresses his confusion at Smolder referring to her brother as "sweet" and "sensitive" earlier. Smolder explains that Garble's tough-guy persona is just a front he puts on for his friends, comparing him to a burnt marshmallow: smoky on the outside, but soft and sweet on the inside.

Smolder, Spike, and Garble take part in both Dragon Lands activities and pony-like activities together, including lava diving, tea parties, flying, and sharing circles. Throughout each activity, however, Garble torments Spike and rejects his offerings of friendship. Back at the egg-hatching grounds, Fluttershy tries to get the eggs to hatch by reading them stories. But the only change in their behavior is that they start shaking, which Ember mentions they have been doing for days with no explanation.

Some time later, Garble's friends redirect some of the Dragon Lands' lava to make a spot for lava surfing. As Garble and Smolder go surfing, Spike stays behind, miserable from all of Garble's torment. Fluttershy appears to explain the situation with the dragon eggs, and Spike reveals to her that Garble is Smolder's brother and all of his attempts to cheer him up have failed.

When Garble and his friends harass Spike by throwing balls of lava at him, Fluttershy angrily tells them to stop and reminds them that Spike came to the Dragon Lands to cheer up Garble, earning Garble even more ridicule from his friends. As Garble and his friends go lava surfing with Smolder, Spike decides to trade tasks with Fluttershy: she tries to cheer up Garble, while he goes to try and help with the dragon eggs.

"Just you wait, Garble. You're dealing with Fluttershy now, and she's packin' a whole lifetime of kindness!"
— Fluttershy

Back at the egg-hatching grounds, Ember tries to get the eggs to hatch with pony-like affection, but they continue to do nothing but shake. When Spike appears and feels the ground underneath the eggs, he realizes it is cold, even though there is supposed to be an underground lava lake heating the ground.

They discover that Garble's friends have been redirecting lava from the underground lake to use for lava surfing and hot baths. Ember furiously orders the teenage dragons to direct the lava back, but it is too difficult for them. Spike suggests moving the eggs somewhere warmer, but Ember says they are too fragile to move safely. She tells Garble's friends to gather all the dragons to the hatching grounds so they can heat the ground themselves.

Meanwhile, Fluttershy searches for Garble and is drawn to the sound of bongo drums. Much to her surprise, she finds Garble reciting beat poetry for Smolder in private. After Garble's initial anger at being caught, he and Smolder explain to Fluttershy that Garble is secretly a beat poet who expresses himself through his rhymes, performing exclusively for Smolder and keeping it hidden from his friends for fear of being mocked. However, ever since Smolder left for school, Garble has been creatively repressed, and he picks on Spike to avoid being picked on himself.

Fluttershy dismisses Garble's claims that Spike is weak, arguing that his courage to be who he is regardless of what anyone else thinks makes him stronger than Garble. Just then, Spike appears to summon Smolder and Garble to the hatching grounds.

At the egg-hatching grounds, Ember has every dragon in the Dragon Lands warming up the eggs with their fire breath, but the eggs still do not hatch. When Garble's friends make fun of Spike some more, their laughter-induced fire breath burns hotter than normal fire, giving Garble an idea. He grabs his bongo drums and starts reciting his beat poetry in front of the other dragons. When the dragons laugh at him, their fire breath burns hotter than before, warming the dragon eggs enough to make them hatch.

Before Garble's friends can make fun of him for being a poet, Ember speaks out on his behalf, declaring him a hero. Smolder says her friends and school teachers have taught her to celebrate the differences of others, not mock them. Ember agrees with this sentiment, and as she and some of the other dragons ask Garble for poetry-writing tips, Fluttershy smothers the newborn baby dragons with love.

Smolder: My brother's been having a hard time since I left for school. I want to go home and check on him. He's a really sweet guy, and the other dragons can be kind of rough.
Spike: Did you say "sweet guy" and "dragon" in the same sentence?
Smolder: Yeah. He's sort of like you, Spike.

Fluttershy: Ah, Dragon Lord Ember. How nice to see you.
Ember: Nice to see you too... uh... Which one are you again? The party one? Apple Dash! Or was that the country one?
Fluttershy: Fluttershy. The one who loves creatures. Are... all these yours?
Ember: What?! No! None of them are. Watching over eggs is just part of the glamorous life of a Dragon Lord.

Smolder: Eh, just ignore them, "Gar-Gar".
Garble: Smolder! Not in public!
Spike: Oh, it's okay to have a nickname. Sometimes I'm called "Spikey-Wikey".
Garble: Seriously? You're admitting this?

Spike: Thank you, Smolder. My turn. I like how you always let everycreature know how you're feeling, Gar-Gar.
Garble: Only Smolder gets to call me that!

Fluttershy: [gasps] First of all, there's nothing wrong with being a pony! Second, Spike isn't afraid to be who he is, no matter what you or anycreature thinks! That's real strength! Not like some dragons I know.
Smolder: For a pony without a horn, she's sure got a point.

Ember: And from now on, in my kingdom, that's exactly what we will do. Now, if you don't mind, can you teach me how to write poetry like that? It's pretty cool.
Garble: Uh... yeah, sure. No problem!
"Billy": Yeah, me, too!
Clump: I want to learn!
Spike: Take a number, guys.
Fluttershy: I'll take them all! [giggling] 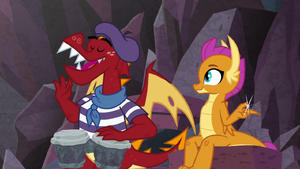 Retrieved from "https://mlp.fandom.com/wiki/Sweet_and_Smoky?oldid=2150204"
Community content is available under CC-BY-SA unless otherwise noted.