Sweetcream Scoops is a female unicorn pony who appears in the IDW comics and is mentioned in the chapter book Pinkie Pie and the Rockin' Ponypalooza Party! She has a light green coat, rose mane and tail with gold and gamboge streaks, blue eyes, and a cutie mark of ice cream on a cone. She first appeared in merchandise. She shares her design with unicorn Twilight Sparkle, S02E02 Unnamed Unicorn Mare #2, and Lovestruck.

Sweet Cream[sic] Scoops appears on page 5 of Issue #1, part 1 of The Return of Queen Chrysalis. She is one of a number of ponies in Ponyville who are infected during the changeling takeover of the town. She stands in a street corner, next to a street lamp, a red post box, and a pair of pink flowers.

Of Issue #9, she appears on cover A/WeLoveFine art print and T-shirt "Strange Days", page 10, and a con cover. Of Issue #11, she appears in a yearbook picture on cover A and also appears on page 13. On Issue #19 page 2, a building in an alternate universe has a sign with the text "Sweet Cream[sic] Scoops Detective Agency".

Sweet Cream[sic] Scoops appears on page 2 of Issue #3, in How Rarity Got Her Groovy Back. She is one of a number of characters present at Pinkie Pie and Spike's after party for Rarity. She leans in toward Big McIntosh while smiling and looking at him with her eyes half-open, which he reacts to by pulling away from her while looking back at her with an apprehensive expression on his face.

On page 18 of Issue #10, Sweet Cream[sic] Scoops appears unicycling on a tightrope over a narrow pool of piranhas.

On Issue #8 page 12, Sweet Cream[sic] Scoops appears on the Mount Monument observation deck with September, Felix, and Bumblesweet. She also appears on My Little Pony: Friends Forever Issue #38 page 15 running away from a giant Philomena and Tiberius.

In chapter 1 of the book Pinkie Pie and the Rockin' Ponypalooza Party!, "Welcome, Spring-Sproing Springtime", Pinkie Pie reads from her Pinkie Party Planner that an "Ice-Cream Sundae Sunday party at Sweetcream Scoops's house" is tomorrow.

A mini-figure toy and another collector card of Sweetcream Scoops are included together in the twelfth wave of mystery packs. 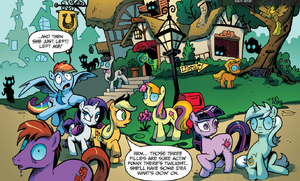