Tank is a male tortoise who is first introduced in May the Best Pet Win! By the end of the episode, he becomes Rainbow Dash's pet and the first pet to be introduced in the second season.

On April 21, 2013, Lauren Faust stated regarding Tank, "Hasbro paired RD with a tortoise[sic] for the first batch of toys & I liked it and rolled with it. I think Rob came up with the name."[2] Charlotte Fullerton stated in 2015 that Hasbro had "wanted each of the ponies to have their own pet";[3] pets owned by the rest of the Mane 6 had been introduced in the first season. On November 19, 2011, Faust stated that since May the Best Pet Win! was conceived of and written almost a year prior to its premiere, "It's a coincidence that it's the same concept fans came up with."[4]

Tank is introduced as a slow and hopeful tortoise in the episode May the Best Pet Win!, and he is named only after being picked by Rainbow Dash as her pet. He is introduced in Fluttershy's backyard along with many other animals, where Fluttershy states he had always dreamed of being somepony's pet. When Rainbow Dash begins searching for a suitable pet, Tank makes many attempts to get Rainbow's attention, but to no avail. Still, Tank persistently attempts to get Rainbow Dash to choose him as her new pet, but she refuses, seeing him as a useless, slow pet that will only "keep her grounded".

Despite her initial rejection, Fluttershy convinces Rainbow Dash to let Tank participate in the competition, if only for the sake of convincing Rainbow that if she gives him a chance she'll end up liking him. He is not considered pet material at first by Rainbow, as he is slow and cannot fly, but he wins her over with his tenacity. He is the only animal that helps Rainbow Dash after she gets caught in a rockslide, and gives her a ride on his back to safety. She chooses him as her new pet over the falcon that originally won, since he was the only pet to cross the finish line with her, as she had requested. This is similar to the story in Aesop's Tortoise and the Hare.

In the final scene of the episode, Tank is seen flying around with a magic-propelled helicopter rotor strapped to his shell and wearing aviation goggles, allowing him to keep up with Rainbow Dash and follow her in the air. The design of the shaft of Tank's helicopter-like flying machine has been used for background weather vanes in previous episodes.

Tank appears in one scene of Too Many Pinkie Pies, inside Fluttershy's animals' tree hiding spot.

His next appearance is in Just for Sidekicks, previewed in a season three episode clip shown in a bumper on The Hub's website.[5] Spike offers to look after Tank for Rainbow Dash while she is in the Crystal Empire. At first, Rainbow is reluctant, claiming that Tank can look after himself, though he immediately proves her wrong by crashing into several things and knocking his rotor off. Throughout the scene, Rainbow acts as though the 'relationship' between her and Tank is strictly professional, but she gets embarrassed when the tortoise gives her a long lick on the face (witnessed in full by Rarity). Later, in the library, Rainbow and Tank share a quick nose rub while they think no one is watching.

Before she leaves for the Crystal Empire, Rainbow suggests that Spike should at least think about getting a helmet, because "You only want to get hit in the head by a flying turtle... once." Spike ignores the advice, and Tank flies into his head several times in the episode, knocking him out the second time, and only after the third time does Spike learn his lesson and wear a crash helmet.

When Spike gives the pets to the Cutie Mark Crusaders to look after, Scootaloo tries to paint Tank's shell.

On the train to the Crystal Empire, Tank joins the other pets in taking out Joe's refreshment trolley, and munches on a spilled donut.

Tank interacts with some of the other main characters' pets all through the episode. Opalescence seems to show affection for him, first rubbing herself against him in Carousel Boutique, then lying on him in the train, and spinning round and round by clinging on to him near the end of the episode. He attempts to land on Owlowiscious's perch, inadvertently catapulting the owl across the room, and Angel kicks him through a door to open it, leaving him spinning upside-down like a spinning top.

In Magical Mystery Cure, Tank appears in one of Rainbow Dash's flashbacks.

He also appears briefly in the background with Rainbow Dash in Pinkie Pride. In the episode Maud Pie, Tank is seen with the other pets while the Mane Six and Maud Pie have a lakeside picnic. Tank also appears in Testing Testing 1, 2, 3.

Tank appears again in Tanks for the Memories, where he starts showing signs of sleepiness in preparation for hibernation through the winter. Rainbow Dash, having made plans with Tank during the winter, tries numerous ways to prevent winter from coming so Tank doesn't hibernate, but each one fails. Eventually, Rainbow tearfully gives in and lets Tank sleep until spring.

In Applejack's "Day" Off, Rainbow Dash wears the matching slippers that represent Tank from Tanks for the Memories again when she waits her turn at the Ponyville Day Spa.

Tank makes a brief appearance in Rock Solid Friendship when Pinkie Pie tries to convince her sister Maud to stay in Ponyville, believing him to be a kind of rock Maud has never seen before. He also briefly appears in Fluttershy Leans In as one of Dr. Fauna's animal patients. In Parental Glideance, Tank appears in a photo in Scootaloo's scrapbook. In Secrets and Pies, it is revealed that the pie-hating Rainbow Dash feeds many of the pies that Pinkie Pie gives her to Tank.

In The Last Problem, Tank appears in Rainbow Dash's group shot during The Magic of Friendship Grows.

Throughout May the Best Pet Win!, Fluttershy insistently corrects others calling Tank a "turtle" to a "tortoise". Near the end of the episode, she uses "turtle" herself, and all of her friends correct her in unison. The use of either term to describe terrestrial turtles may be acceptable in some circumstances. He is exclusively referred to as a turtle and a tortoise throughout Just for Sidekicks and Tanks for the Memories respectively.

Tank's name was conceived of by Rainbow Dash after she compared his determination to that of an unstoppable tank.

Tank appears on My Little Pony: Friendship is Magic Issue #3 page 3, flying using his magic helicopter. He is featured on the issue's cover D and on Issue #4 cover B. He also appears throughout Issue #23 and Issue #41. An alternate universe's Tank - with a mustache and goatee - appears in Issue #20.

In Issue #83, Tank is escorted by Twilight and Spike to compete in the Great Northern Tortoise Races in Trottingham. He also appears on the A cover of Issue #88.

In Pet Project, Tank appears as human Rainbow Dash's pet and appears in the Mane Seven's charity calendar photo shoot with the rest of their pets. He also appears in a photograph from the photo shoot in Leaping Off the Page.

In Aww... Baby Turtles, Tank leads a nest of recently hatched baby turtles to the ocean. In The Craft of Cookies, he is shown as one of Pinkie's "assistants" in her cooking video. In Sic Skateboard, Rainbow films Tank riding a skateboard down a miniature halfpipe. She laters adds special effects to the footage to make it look more impressive. In Best in Show: The Pre-Show, Tank appears as a contestant in the first annual Canterlot Pet Show. In Best in Show: The Victory Lap, he manages to earn a spot in the second place winners group and is revealed to have fallen in love with another competitor, Bulk Biceps's dog Wooyoo.

Tank, with his magic helicopter, is one of the four types of obstacles in Rainbow Dash's Rainboom Game. During gameplay, it is possible for more than one of him to be on-screen simultaneously.

Tank appears in episode 3 of Baby Flurry Heart's Heartfelt Scrapbook, "All About Alicorns".

Rainbow Dash assumed the little tortoise known as TANK was boring and slow, and could never be as exciting as she was—until he heroically saved her from a rock slide! Now she's proud to call him her pet!

TANK the tortoise goes at his own pace and doesn't apologize for doing things his own way. He prefers a relaxing atmosphere when he's not competing for attention. If only Rainbow Dash,[sic] would let him hibernate!

Tank is included in the trading card set. "Tenacity is a never give up, can-do attitude, and this tortoise has it!" The initial release erroneously lists Pinkie Pie in the "Owner" graphic.[1] 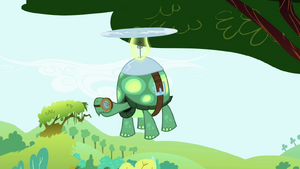