"That means Ponyville is next up for winter!"

"Once we get autumn cleared away..."

"How can you be tired when the most exciting time of the year is right around the corner?"

"– our first winter together!"

"...we'll have a ton of snow for our extreme sledding!"

My Little Pony: Sledding is Magic!

"And over there, we can play horse hockey..."

Tank is an awesome goalie.

"Does Tank look alright to you?"

"Well, he does seem to be moving a little slowly."

Probably should see Fluttershy.
Add a photo to this gallery

"I suppose his heartbeat could be a..."

"Okay, so give him a vitamin or something!"

"I don't think he needs that."

"Uh, too many Daring Do stories."

"You do realize he's not a bear, right?"

"When the weather grows cold and less food is available..."

"...many animals hibernate to conserve energy."

"It's like taking a really long nap during winter..."

A bear with a teddy bear.

"Even tortoises do it!"

"When the time comes, Tank will leave and dig into the ground.

"He'll reappear when the spring sun warms the ground back up."

"Somepony put that picture in there as a joke." (Stage 1: Denial)

"Well, then your book must be wrong!"

"Where are you going?"

"Come on! You're practically twins!"

"...then I guarantee tortoises hiber—"

Looks like Spike finally settled on a bed he liked.

Okay... that was awkward.

"All you need is some hard work to get the old blood pumping."

"These things are heavy! Chock full of snowflakes!"

"We're gonna have such a killer time in the snow, Tank."

"I was just saying how cute he—"

Why are you watching me?

Hey, where are the owners of the caps? And WHERE'S KENNY?!

"What are you looking at?!"

"Pinkie Pie and I are just having a conversation!"

"Look, Rainbow Dash, we all know how upset you are about Tank hiber—"

"That's what started this all!"

"We all know how upset you are about Tank."

"But you shouldn't take your anger out on your friends."

"I need you bright-eyed and bushy-tailed, not sleepy-eyed and scaly-tailed!"

"But get up anyway!"

"What about all the primo things we're gonna do together this winter?"

"Don't you wanna do those things with me?!"

"Tank's only hibernating because it's cold, right?"

"Well, I'd rather have him awake in the heat than asleep in the cold..."

Then she got an idea.

We're pretty sure you can already tell what film is referenced here. If you can't, then we don't even know what to say anymore. (Stage 3: Bargaining)

Sunshower, not to be confused with Sunshower Raindrops.

"So where do these clouds go?"

"Over by Clear Skies."

"But there's clear skies over there, too!"

"Fluffy Clouds? He's over there!"

Who's on first base. What? Second base!

"Hah! Stopping winter is gonna be a breeze!"

Okay, where do they get those icicles?

How long will it take for those ponies to catch on to this?

Boy, she sure loves Tank.

"Here comes the next shipment!"

"Move those clouds over!"

"If I can't stop winter in Ponyville, maybe I can stop it at the source!"

Look at that drawing in that locker.

How did they happen to have a tortoise-sized uniform?

Oops! Forgot to let him in.

"Now we just gotta figure out a way to shut it down."

"I think we gotta go bigger than that."

"With no water, they can't make clouds or snow!"

" I hate to do this to those weather ponies..."

"And there goes winter down the drain!"

Rainbow the Snowpony... was a jolly happy soul.

OH NO! NOT THE RED BUTTON!

"Winter Is Coming!" ("Thanks a lot, Mr. Larson," said everyone without a hint of sarcasm.)

Run for your life! The machine's gonna blow!

Whoa... Must be fun (just like being in a roller-coaster made of snow)

Booom... A snow bomb has just gone off.

Well, THAT was an interesting snowstorm.

Looks like Rainbow's efforts to stop winter may have gotten it started early.

Tank, where are you?!

"Rainbow Dash! Are you alright?"

"How are you feeling, Rainbow Dash?"

"The poor thing looks so sad! Just what are we doing to do?"

"Buck up, sugarcube. You just ain't yourself these days."

"Let me handle this."

"Rainbow Dash, your winter is going to be... pet-less."

Oh, Dashie... This is the first time I've seen you cry!

I know how you feel, Dashie. Nopony wants to lose their pet.

"Whatever did you do that for?!"

"Because she'll never get past this until she lets it all out."

You're the Element of Honesty!

That seems too long!

"Alright, alright. There, there."

"She's got to be about done by now. Can't be too much left in there."

Not finished yet, though.

Gee, I guess crying is contagious.

Okay, now this is truly depressing.

"Look, everypony, I know how hard it is to say goodbye—"

"I'm mostly sad because you're not sad!"

"Applejack cries on the inside, Twilight!"

"It's true." (Eeyup. Applejack's much more mature than the rest of her friends)

"You think she's done or just getting a third wind?"

"Thanks, everypony. I don't know what I'd do without you."

Awww... (Stage 5: Acceptance)
Add a photo to this gallery

The perfect season for sledding....

Hey! Even Spike got some moves.

Eat your heart out, Tonya Harding!

"You think we could mess up winter every year? It's way less work!"

"Uh, I don't think Rainbow Dash could handle it."

"Riding that entire season from Cloudsdale to Ponyville was pretty awesome."

"And when Tank finishes hibernating..."

"...I'm gonna throw him the biggest welcome home party ever!"

"Or wait. Should it be a 'welcome above ground' party?"

"And I'll design him a very special suit just for the occasion..."

"So, you really wanna do this hibernating thing, huh?"

Don't you think we have seen you cry TOO much, Dashie?

See you in spring, Tank!

"Well? Ready for some winter fun?"

"That little guy can never get to sleep without a bedtime story."

At least her pet isn't going to live on that farm upstate with mine.
Add a photo to this gallery 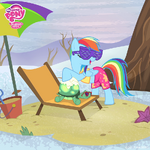 Add a photo to this gallery
Retrieved from "https://mlp.fandom.com/wiki/Tanks_for_the_Memories/Gallery?oldid=2195264"
Community content is available under CC-BY-SA unless otherwise noted.