To prevent her pet tortoise Tank from going into hibernation, Rainbow Dash tries to stop winter from coming to Ponyville.

Fluffy Clouds and the Cloudsdale winter lab were previewed in different ones of the animation images shown at Ponycon NYC on February 16, 2015.[2][3]

On March 3–5, 2015, an unofficial My Little Pony: Friendship Is Magic[sic] season 5 episode listing on IMDb titling the fifth episode as "Seal Deal" was discredited by Jim Miller.[4][5][6][7]

M.A. Larson tweeted "There's something in tomorrow's ep that I told Hasbro I'd take full responsibility for. So, in advance, it is entirely my fault. #MeaCulpa" on April 24, 2015.[8] Larson later specified it to be Twilight's "winter is coming" line.[9][10]

According to Larson, the concept of lightning kept in glass jars was originally written for the season one episode Sonic Rainboom but was cut for time.[11]

Ashleigh Ball was nominated for a 2016 Leo Award for Best Performance in an Animation Program or Series for this episode.[12]

Cloudsdale settles in the sky over Ponyville, signalling the beginning of the winter season. As ponies shake leaves from the trees with the Running of the Leaves, Rainbow Dash is excited about her first winter with Tank. However, Tank is unable to stay awake. Twilight Sparkle doesn't notice anything out of the ordinary about Tank, but his constant yawning makes Rainbow Dash nervous.

Rainbow takes Tank to Fluttershy's cottage for a checkup. After examining him, Fluttershy says he's perfectly healthy and that he's only getting ready to hibernate for the winter. Despite Fluttershy's expertise on the subject and insistence, Rainbow Dash doesn't accept that tortoises hibernate and leaves to get a second opinion.

At the Castle of Friendship, Rainbow gets a second opinion from Spike, who insists that tortoises and dragons aren't in the same animal family. Rainbow dismisses Spike's opinion as well and takes Tank out to the cloud fields, hoping that hard work will keep him awake. As her friends take notice of Tank's behavior, the increasingly stubborn Rainbow begins to lash out at them in anger, and she storms off.

At Rainbow's cloudominium, Tank gets even sleepier, and Rainbow tries to think of another way to keep him awake. Reasoning that Tank is only hibernating because of winter, she decides to stop winter from coming.

In an attempt to keep winter from coming, Rainbow Dash tries to keep the sky clear of snow clouds. As she sings the song I'll Fly, she also stops a flock of ducks from flying south for the winter, disrupts the other Pegasi from making snow, puts fallen leaves back on the trees, and tries to keep the weather warm for Tank.

Unfortunately, her efforts are made futile as the Pegasi bring in more clouds from Cloudsdale. Rainbow decides that the best solution is to stop winter at its source, and she sneaks into the Cloudsdale weather factory.

Posing as a factory employee and keeping Tank on a leash, Rainbow sneaks into the laboratory where the clouds and snow are manufactured. She ties Tank's leash to a snowflake-inspecting magnifying glass on a nearby desk and looks for a way to shut the lab down, eventually finding a giant water storage container used for creating the clouds and snow.

As Rainbow drains the water from the container, Tank—in his state of heavy drowsiness—accidentally knocks into things around the lab. Rainbow tries to stop him, but she ends up causing even more damage as stuff breaks or gets knocked over. The entire lab soon overloads with power, causing chaotic weather over Cloudsdale and drawing attention from the rest of the Mane Six in Ponyville.

While the Pegasi struggle to bring the factory under control, a giant snowball—with Rainbow and Tank inside—hurls toward Ponyville, and Twilight tells the ponies nearby to run for cover. When the snowball collides, the entire town becomes covered in snow. Despite Rainbow's best efforts, winter has arrived, and Tank is closer to hibernating than before.

Back at her cloudominium, Rainbow sulks in bed as Tank grows even sleepier. Her friends arrive to console her, but their words do nothing to cheer her up. When Fluttershy bluntly points out that Rainbow is going to spend her winter without a pet, Rainbow finally cracks and breaks down in tears. Fluttershy explains to the rest of the Mane Six that Rainbow needs to let it all out in order to accept Tank's hibernation.

Rainbow continues to cry, and Fluttershy, Rarity, and Pinkie Pie briefly share in her sorrow. When Rainbow finally stops crying, she feels better, and she thanks the ponies for helping her through her grief.

A short while later, ponies around Ponyville have fun in the snow. Rainbow arrives with Tank, having finally accepted his hibernation. At the base of a tree, Tank digs a small burrow for himself to sleep in, and the Mane Six say their goodbyes until spring. Before joining her friends in having fun, Rainbow Dash reads a bedtime story to Tank.

Rainbow Dash: Come on! You're practically twins!
[beat]
Spike: I'm purple.
Rainbow Dash: But if you don't have to hibernate, why should Tank?!
Spike: Because he's a tortoise and I'm a dragon!
Rainbow Dash: Same family though, right?
Spike: No!
Rainbow Dash: I'll take that as a yes.

Rainbow Dash: [huff] These things are heavy! Chock full of snowflakes! We're gonna have such a killer time in the snow, Tank. Tank? Tank!
Pinkie Pie: Aww, look at the cute wittle Tankie, all snuggly-wuggly, getting ready to hibern—
Rainbow Dash: Don't say that word!
Pinkie Pie: Which one? "Snuggly"? "Wuggly"? "Tankie"? "Hibernate"?
Rainbow Dash: That one!

Rainbow Dash: I just have to stop winter!

Rarity: Uh, how can I say this tactfully... you've lost your sparkle, Rainbow Dash.
Pinkie Pie: I hate to say this, but, well... you've become...! [hushed] A party pooper!

Fluttershy: Rainbow Dash, your winter is going to be pet-less.

Pinkie Pie: You think we could mess up winter every year? It's way less work! 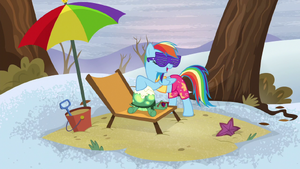 Tanks for the Memories image gallery

Retrieved from "https://mlp.fandom.com/wiki/Tanks_for_the_Memories?oldid=2149353"
Community content is available under CC-BY-SA unless otherwise noted.