Taye Diggs is an American actor and singer. He provides the voice of Capper in the feature film My Little Pony The Movie.

Diggs' involvement in the film was first announced by The Hollywood Reporter[1] and Entertainment Weekly[2] in May 2016; this was later confirmed by Diggs himself in February 2017.[3]

Outside My Little Pony, Diggs is a well-known actor in film and theater. In 1994, he made his Broadway debut in the Lincoln Center Theatre revival of Rodgers & Hammerstein's Carousel. In 1996, he originated the role of Benny the landlord in the musical Rent. He has also starred in The Wild Party, understudied for Norbert Leo Butz as Fiyero in Wicked, and most recently appeared as the title role in the Broadway revival of Hedwig and the Angry Inch.

In television, Diggs has had roles on the soap opera Guiding Light, the comedy-drama Ally McBeal, and in the final season of Will & Grace, and he portrayed the title character on the short-lived but critically acclaimed UPN series Kevin Hill. Diggs also co-starred opposite Kate Walsh in Private Practice, and he had a guest role on The West Wing. He has most recently starred in Murder in the First and Empire.

In film, Diggs' breakout role was in 1998's How Stella Got Her Groove Back. He also starred in The Best Man, the 1999 remake of House on Haunted Hill, Brown Sugar, and the 2002 film adaptation of Chicago. In 2005, he reprised the role of Benny for the film adaptation of Rent. 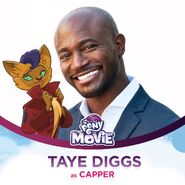