Tealove is a female Earth pony who appears in the IDW comics. She has a lime green coat, two-tone cerulean mane and tail, pink eyes, and a cutie mark of a teacup surrounded by hearts. She first appeared in merchandise.

According to comic artist Heather Breckel, Tealove's inclusion in the comics was at Hasbro's request.[2]

Tealove first appears on page 15 of Friendship is Magic Issue #10, in Zen and the Art of Gazebo Repair. At the Summer Wrap-Up Hoedown, she bumps into Big McIntosh in a crowd of ponies and instantly falls in love with him, even imagining an action-romance future with him as secret agents. As Tealove envisions the bridesmaids wearing lavender at her and Big Mac's wedding, Fleetfoot—having fallen in love with Big Mac in Issue #9—gets into a catfight with her. Tealove appears once more on page 20, stalking Big Mac across the festival grounds.

A mini-figure toy and collector card of Tealove are included together as number 11 of 24 in the second wave of mystery packs released in 2011. The multilingual version of the card states on the back side that Tealove "loves cozy chats!" then restates this description once each in French, German, Spanish, Portuguese, Italian, Dutch, Swedish, Danish, Greek, Polish, and Turkish, in that order.

The mini-figure toy of Tealove is also included with the book Mini Pony Collector's Guide.

"The bridesmaids will wear lavender..."
— My Little Pony: Friendship is Magic Issue #10 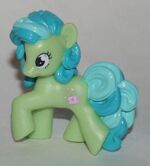 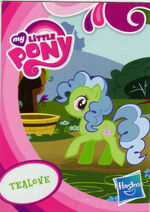 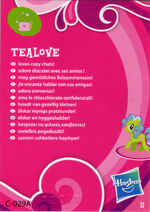 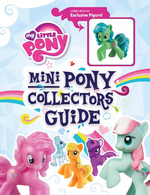 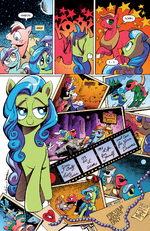 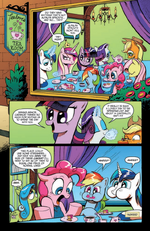