Teddie Safari is the placeholder name of a female pony who first appears in Trade Ya! She has a very light yellow coat, brilliant gamboge and light amber mane and tail, moderate harlequin eyes, and a cutie mark of three teddy bears. She is unnamed in the show, only being referred to as "Daring Do Collector" in the credits of Trade Ya! and in The Journal of the Two Sisters, and as "Receptionist Pony" in the credits of The Point of No Return.

Teddie Safari resembles Braeburn, and her outfit is the same as Daring Do's. In at least three shots, she has Pegasus wings sticking out through her shirt, but the rest of the time there is no trace of these wings even from underneath her shirt; she is never seen shirtless.

In Trade Ya!, Teddie Safari appears with her own stall at the Rainbow Falls Traders Exchange, with several pieces of Daring Do merchandise on display. She first appears in the background several times, interacting with a Crystal Pony on one occasion.

Rainbow Dash and Fluttershy approach Teddie Safari in the hopes of trading for her signed first edition of Daring Do and the Quest for the Sapphire Statue. Teddie initially refuses to trade when all Rainbow Dash offers in exchange is a rusty horseshoe, but agrees to trade for an Orthros owned by a trader of ancient beasts.

When Rainbow and Fluttershy return later with the Orthros in their possession, Teddie Safari once again refuses to trade. Having watched the Orthros' ferocious behavior at the ancient beasts stall all day, she decides she doesn't want it in her house. Fluttershy assures Teddie that an Orthros can be a wonderful household pet with proper training. After seeing how friendly the Orthros is, she agrees to trade her first edition Daring Do for it—with the added condition that Fluttershy stay with them in Manehattan until it's trained.

When Rainbow Dash realizes what she's done, she has Twilight Sparkle declare a mock trial to decide the fairness of the trade. Rainbow appeals to Teddie Safari's better nature by saying there's nothing worth more to her than a friend. Teddie, touched by Rainbow's words, agrees to call off the trade.

In the holiday special My Little Pony Best Gift Ever, she appears at the Hearth's Warming Craft Fair at Rainbow Falls, selling the Daring Do book Daring Do and the Ring of Destiny, which Fluttershy plans to get for Rainbow Dash before her attention is drawn by Flim and Flam.

In season nine's The Point of No Return, Teddie Safari appears out of her Daring Do uniform as a receptionist at the Silver Stable Retirement Community.

She appears in a promotional image posted by Hasbro's My Little Pony Facebook page on April 21, 2014.[1]

Safari Pony is a character in Gameloft's mobile game. The game's description of her states, "A Daring Do fan-mare of some great renown, selling her hero's merch in both city and town."

"It's just a rusty old horseshoe. That's not worth anything to me."
— Trade Ya!

"I've been watching that thing over at the ancient beast booth! It's crazy! I don't want one in my house!"
— Trade Ya! 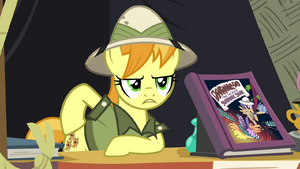