Tender Taps is a male school-age Earth pony who first appears as a supporting character in the season six episode On Your Marks. He has an orange coat, two-tone purple mane and tail, purple eyes, and a cutie mark of a top hat and spotlight.

Tender Taps shares his initials with his voice actor Travis Turner; show director Jim Miller remarked this to be a "happy accident" on Twitter on April 9, 2016.[1]

According to On Your Marks storyboard artist Ward Jenkins, Tender Taps was mainly inspired and influenced by Gene Kelly.[2]

Tender Taps is introduced as a very shy dancer in Hoofer Steps' dance class. He first appears sitting shyly in the corner and waving at Apple Bloom. When Apple Bloom's attempt at doing a partnered dance routine ends in failure and she leaves, Tender Taps follows her out. He encourages her not to give up on dancing and shows her how fun it can be with some expert tap dancing moves.

Apple Bloom wishes Tender Taps luck at his class's dance recital, but Tender Taps says he isn't going to perform. Although performing is all he thinks about, he suffers from debilitating stage fright and doesn't have the confidence to dance in front of an audience.

Later at the recital, Tender Taps watches the performances when Apple Bloom returns with Sweetie Belle and Scootaloo. Apple Bloom tries to convince Tender Taps to perform, calling him the best dancer she has ever seen, but Tender Taps reminds her of his stage fright. Apple Bloom offers to dance alongside him, claiming that he'll look good next to a dancer as poor as her. The other Crusaders also help out, with Scootaloo using bungee-jumping to change the stage backdrop and Sweetie Belle crocheting costumes for Tender Taps and Apple Bloom to wear.

On stage, Tender Taps is too terrified to move. Apple Bloom loosens up the crowd by embarrassing herself and encourages him some more. Tender Taps finally starts to dance and gets progressively into it. After his elaborate and energized performance, the audience breaks into applause. As a result of overcoming his stage fright, Tender Taps earns his cutie mark.

A short while later, Tender Taps thanks the Cutie Mark Crusaders for helping him, and he expresses hope that Apple Bloom continues dancing.

Tender Taps makes a cameo appearance in The Fault in Our Cutie Marks, tap-dancing on a stage in one scene and speaking with Gabby in a flashback scene.

Tender Taps is a character in Gameloft's mobile game.

TENDER TAPS is a dancing machine who's hoping for a big break. He's shy about his talents, but once he gets his hooves moving, there's no stopping him.

In the Defenders of Equestria expansion set of Enterplay's collectible card game, card #78 U of Tender Taps gives him the description "Tender Taps is great at solo performances, though he prefers to do duets inspired by the performances of classic entertainers, like Bubbles & Buck."

"You weren't that bad. You just need to learn a few things on your own. Being a soloist can be fun! [...] You just have to do it with feeling!"
— On Your Marks

"I bet some day my cutie mark will even be about performing! But I could never dance in front of an audience the way I do in class. That's t-t-t-t-terrifying!"
— On Your Marks

"I don't know if you noticed, but that auditorium is full of other ponies! I can't go out there! What if I'm bad?!"
— On Your Marks

"I can't believe it! It's just what I always imagined it would be! And if it weren't for all of you, I wouldn't even have it."
— On Your Marks 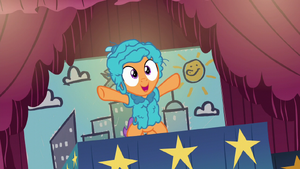