My Little Pony Friendship is Magic Wiki
Register
Don't have an account?
Sign In
Advertisement
in: Male characters, Hippogriffs, Royalty,
and 4 more
English

Terramar is a male Hippogriff/seapony and Silverstream's younger[1] brother who first appears as a supporting character in the season eight episode Surf and/or Turf.

Terramar first appears greeting Twilight Sparkle and the Cutie Mark Crusaders near the Mount Aris train station, transforming from a seapony to a Hippogriff as he does. He serves as the subject of the Crusaders' Cutie Map-given mission as well as their introductory guide to Mount Aris/Seaquestria culture, giving them tours of both locations and explaining the union between the two races, and how, after the Storm King's defeat, some have chosen to return to their home on land while others have decided to remain in the ocean. Like his sister Silverstream and fellow Hippogriffs and seaponies, Terramar wears a fragment of Queen Novo's Pearl of Transformation so that he can travel back and forth between land and sea.

After giving the Crusaders a tour of Mount Aris, he explains to them that he feels torn between his two homes because his father Sky Beak and sister Silverstream live on land while his mother Ocean Flow lives underwater. The Crusaders try to help him decide between the two, but a disagreement arises between Sweetie Belle and Scootaloo over which place is better.

Feeling more lost than ever, Terramar decides to live in a tree so that he doesn't have to be on land or in the water. Following an apology and pep talk from the Crusaders, Terramar talks with his parents, who tell him that he doesn't have to choose between either of his two homes and can keep going back and forth as he pleases. Terramar is overjoyed by this news, and he thanks the Crusaders for their help.

Terramar is briefly mentioned by his sister Silverstream in A Rockhoof and a Hard Place.

In Uprooted, Terramar appears alongside his parents as Silverstream explains the situation about the Tree of Harmony.

In Student Counsel, Terramar informs Starlight Glimmer of Silverstream's disappearance, and he joins Starlight and her friends in trying to find her. After running afoul of a flock of cockatrices, they find Silverstream at the "Treehouse of Harmony", learning that she got so caught up in a school project that she forgot to return home.

In The Last Crusade, Terramar appears among the characters the Cutie Mark Crusaders helped at their Appreciation Day parade.

In The Ending of the End - Part 2, Terramar appears during the final battle against Queen Chrysalis, Lord Tirek, and Cozy Glow. He also appears in seapony form during the flashback of Silverstream rallying the seaponies for the battle.

In The Last Problem, he briefly appears in Fluttershy's group shot during The Magic of Friendship Grows.

Terramar is a character in Gameloft's mobile game. His in-game description states, "With a mom in the sea and a dad in the skies, this young Hippogriff felt caught between two worlds--until he realized he was an equal part of both!" Terramar is sometimes included in the game's "Young Six" Collection instead of Smolder. He also plays a role in the game's School Daze event, in which-contrary to the events of the series-he comes to Ponyville and meets the Crusaders there.

"If you all can't even agree amongst yourselves, how am I supposed to make up my mind?! It's hopeless!"
— Surf and/or Turf

"What kind of counselor turns away a student with a problem?!"
— Student Counsel 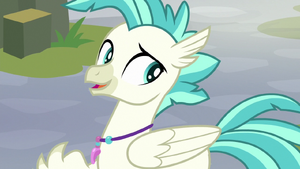