Testing Testing 1, 2, 3 (spelled as Testing, Testing, 1, 2, 3 by some sources) is the twenty-first episode of the fourth season of My Little Pony Friendship is Magic and the eighty-sixth episode overall. In this episode, Rainbow Dash uses unorthodox methods to prepare for the Wonderbolts Reserves entrance exam. The title is a common phrase used by musicians to test the volume levels of a microphone.

This episode is listed as the twenty-second episode of the fourth season on Zap2it.[2] Jim Miller wrote on Twitter that "Testing is 422".[3]

The Rainbow Helicopter's inclusion was asked for by Hasbro Brand.[4]

This is one of the few times that the Treehouse channel does not mute the word "loser" in its airings of the episodes.

A small part of The rappin' Hist'ry of the Wonderbolts (without the music) reappears in Cakes for the Memories.

The episode opens just outside Golden Oak Library; in the middle of Twilight Sparkle reading a book, Rainbow Dash swoops by and interrupts her. Twilight flies up and gives Rainbow an earful about not studying for her upcoming exam to join the Wonderbolts Reserves. While Twilight stresses how important the test is, Rainbow Dash is not as concerned. Suddenly, Twilight comes up with the idea of tutoring Rainbow for the test and teleports herself and Rainbow inside the library.

After an unsuccessful quizzing session, Rainbow Dash starts to worry that she'll fail the test, placing blame on Twilight and her faulty studying methods. The two begin to bicker, and before it gets out of hand, Fluttershy intervenes with her own idea to help Rainbow.

Fluttershy's method of teaching involves a play starring the Mane Six's pets, with Angel playing the role of Princess Celestia, Opalescence as Princess Luna, and Gummy, Winona, and Tank as various kinds of ponies. However, the stage soon collapses when Tank crashes, and the performance only leaves Rainbow Dash confused.

Pinkie Pie then enters with her own method of teaching Rainbow their history: through rap. Rainbow finds the song catchy enough, but she's unable to retain its lyrics.

Rarity arrives to help and attempts to teach Rainbow Dash the history of the Wonderbolts through their historical fashions, with which their friends all assist, but Rainbow Dash still has difficulties. Applejack has no advice for Rainbow, as she believes things are best learned through personal experience.

Before long, Rainbow Dash's friends start arguing about whose studying methods are best, pushing her to the brink of desperation.

"Enough! No rapping, no cards, no costumes, no play, and no apples!"
— Rainbow Dash

Convinced that she will never pass the entrance exam, Rainbow flies off.

Twilight joins Rainbow Dash in the sky and apologizes for overwhelming her. She tries to cheer Rainbow up, but Rainbow just puts herself down, calling herself "too dumb to learn anything." As Twilight tries to get through to her friend, Rainbow shoves Twilight away. Twilight is annoyed at first, but she soon realizes Rainbow had stopped her from crashing into Cherry Berry's pedal-operated helicopter.

When Twilight asks how Rainbow noticed the helicopter when she was focused on her, Rainbow explains that she knows how to multitask: while she paying attention to Twilight, she was also monitoring the ground and sky. She'd noticed the Cutie Mark Crusaders coming out of Sugarcube Corner, and she saw Big McIntosh selling a large order of apples to Filthy Rich.

With this knowledge, Twilight comes up with an idea and flies away, leaving Rainbow to sulk. She meets with the rest of her friends to tell them her plan: with each of their ways of helping Rainbow Dash having ended in failure, they decide to try "Rainbow Dash's way."

A short time later, Twilight returns to where she left Rainbow and asks her if she wants to go for a fly. Though she's deeply depressed, Rainbow agrees. During their flight, Twilight makes small talk with Rainbow, and Rainbow still belittles herself, declaring that her dreams of being a Wonderbolt are over.

When they reach Rainbow's house, Twilight asks Rainbow what she remembers about the flight. Rainbow, to her surprise and delight, finds that she's able to recall facts about the Wonderbolts' history with ease. When she asks how that is, Twilight explains that she took advantage of Rainbow's monitoring ability and enlisted the help of numerous ponies to teach her without her realizing.

Rainbow Dash thanks her friends for all their help, but Twilight says Rainbow deserves all the credit herself for her ability to absorb information while flying.

"Ha, I always knew I was brilliant!"
— Rainbow Dash

In the friendship journal, Twilight writes that Rainbow Dash had successfully learned the history of the Wonderbolts and that she herself learned there's no perfect method of learning—"everypony is unique and individual". Elsewhere, Rainbow Dash completes her entrance exam and gives it to the examiner. The examiner hands the test back to Rainbow Dash with a perfect score of 100%, to Rainbow's relief and utter elation.

Rainbow Dash: Well, what special study trick do you have, AJ?
Applejack: Who, me? Oh, I got nothing.
Rainbow Dash: [sighs]
Applejack: Why, I could tell you every little thing there is to know about the history of apples, but I picked all that up over years in the field as a labor of love. How much time you got?
Rainbow Dash: Twelve hours.
Applejack: Oh, then you are up a creek.

Commander Easyglider was the real cream of the crop-

Well, I suggest you put down your silly cards of flash,
For I know that they cannot help our good friend Rainbow Dash!

Twilight Sparkle: Your main focus is flying, but then your brain is also absorbing lots of other information! It's actually really brilliant!
Rainbow Dash: Ha, I always knew I was brilliant! 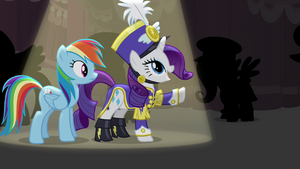