The Beginning of the End - Part 1

The Beginning of the End - Part 1 is the first episode of season nine of My Little Pony Friendship is Magic and the one hundred and ninety-seventh overall.[1] It is the first part of a two-part season premiere.

In this first part, Princess Celestia and Princess Luna decide to retire and hand off the ruling of Equestria to Twilight Sparkle and her friends. Meanwhile, the ancient villain Grogar bands together a legion of villains to conquer Equestria, but King Sombra has plans of his own.

The episode begins with the Mane Six and Spike racing to Canterlot Castle, having received an emergency summons from Princess Celestia and Princess Luna. Twilight Sparkle fears another villain has appeared with plans of revenge or world domination. However, when they arrive to the castle, Celestia and Luna are perfectly happy, and there is no crisis, despite the nature and swiftness of their summons.

They explain that Equestria is enjoying its longest period of peace in recent years, largely thanks to Twilight and her friends. Because of this, Celestia and Luna have decided to retire and leave the protection of Equestria to the Mane Six. Twilight is stunned by such a sudden decision and questions her ability to rule in Celestia and Luna's place. But they assure her that she is ready, having observed her grow and overcome many challenges over the years, and the rest of her friends agree.

Twilight is even more overwhelmed when Celestia and Luna state that the transfer of power from them to the Mane Six will only take a few days. As she goes into a tailspin of stress and worry, her friends calm her down from her "classic Twilight-ing" and remind her of all the memorable times they overcame adversity together, including King Sombra, Queen Chrysalis, Lord Tirek, and Cozy Glow. With her friends' support, Twilight feels more confident about her and her friends' sudden role.

A league of our own

Meanwhile, somewhere in a forest, Queen Chrysalis expresses her unhinged desire for revenge upon Twilight and her friends, and she suddenly vanishes in a swirl of black smoke. In Tartarus, Tirek and Cozy Glow continue to serve their imprisonment sentences, with Tirek becoming increasingly annoyed by Cozy's efforts to befriend him, when they suddenly vanish from their jail cells in the same manner as Chrysalis. Elsewhere, a magical insignia is carved into the ground, restoring the body of King Sombra.

In a remote part of Equestria, Chrysalis, Tirek, Cozy Glow, and Sombra appear in a strange cavern, unaware of who transported them. The one who summoned them is revealed to be the blue-coated ram Grogar, an ancient and powerful villain thought to be a figure of legend. Grogar explains that he has brought the villains together to get rid of Twilight Sparkle and her friends. Having observed all the villains' defeats at the hands of the Mane Six, Grogar has identified the secret to their many victories: working together. He demands that the villains team up with him to finally take the ponies down.

Sombra refuses to join forces with the other villains, however, and vows to retake the Crystal Empire on his own. Grogar encourages the overconfident Sombra to try and take over the Empire by himself, saying if he fails, he must submit to Grogar's will or else be sent back to the shadows. Sombra agrees to the ultimatum, and Grogar sends him away to the Crystal Empire. While Sombra is away, Grogar tells Chrysalis, Tirek, and Cozy Glow to try and work together.

The return of the king

At the School of Friendship, Starlight Glimmer finds Twilight in her office; her spiral of self-doubt gets worse and worse as she races to get everything ready for Celestia and Luna's retirement in a few days. With her and her friends about to assume the role of ruling Equestria, Twilight leaves Starlight in charge of her castle and school.

Much like Twilight's earlier meltdown in Canterlot, Starlight has a meltdown and questions her ability to be in charge. When Twilight expresses her utmost confidence in Starlight's ability, Starlight returns the sentiment back at Twilight. But Twilight remarks that running a school is not the same as running an entire kingdom, and she gets even more stressed out.

Meanwhile, King Sombra begins his new, one-pony assault on the Crystal Empire. As he invades, he uses his magic to bring the Crystal Ponies and royal guards under his mind control, expanding his forces. Shining Armor rallies the remaining guards to battle while Princess Cadance sends an urgent S.O.S. to Twilight. However, when they realize they have forgotten to secure Flurry Heart, they race to her nursery and find Sombra holding her captive. Using Flurry as a hostage, Sombra secures Cadance and Shining Armor's complete surrender and gains control of both the Crystal Heart and the entire Empire.

Upon receiving news of Sombra's return and takeover of the Crystal Empire, Twilight calls her friends together at the Castle of Friendship. Instead of alerting Celestia and Luna or relying on Discord, Twilight takes this opportunity to prove that she and her friends can handle things on their own. Without the use of the Crystal Heart, Twilight suggests using the Elements of Harmony to defeat Sombra, and the Mane Six retrieve the Elements from the Tree of Harmony while Starlight looks after the school.

When the Mane Six arrive at the Crystal Empire, Sombra uses his magic to make them suffer their worst fears. However, they overcome Sombra's dark magic with the Elements of Harmony, and while Sombra is distracted, Spike helps Cadance regain control of the Crystal Heart. The Crystal Ponies are freed from Sombra's mind control, and the Mane Six use the Elements to vaporize Sombra into smoke. With Sombra defeated, Twilight and her friends celebrate their surprisingly easy victory, and Twilight feels a little more confident about their ability to rule Equestria in Celestia and Luna's place.

Some time later, the Mane Six return the Elements to the Tree of Harmony. Suddenly, black smoke fills the tree's cave, and a giant black crystal pops out of the ground beneath the tree, destroying it and shattering the Elements of Harmony to pieces. King Sombra appears before the Mane Six, his earlier defeat having been a trick to lead him right to the Elements. With the ponies' greatest weapon destroyed, Sombra cackles victoriously.

Twilight Sparkle: Something could be terribly wrong! Somepony turned bad? Another evil creature back for revenge?!
Applejack: Don't you think you're bein' a little paranoid?

Princess Celestia: After much consideration, my sister and I have decided it is time for us... to retire!
Mane Six and Spike: [gasp]

Twilight Sparkle: You're retiring?! [...] And you want me to take your place?!
Princess Celestia and Princess Luna: Mm-hmm!

Rainbow Dash: Does this mean we get all your powers?! Ooh, ooh! I call dibs on showing up in everypony's dreams!

Twilight Sparkle: What do we do if something big happens and the princesses aren't there to help?!
Rainbow Dash: Um, if you think about it, they literally almost never help.

Grogar: That fool believed taking my bell would defeat me! But she only weakened me temporarily.
Cozy Glow: Um, Tirek is really old – [to Tirek] no offense, you look great – [to Grogar] but if he knew about you when he was young, we have super different ideas about what "temporarily" means.

King Sombra: I will take back the Crystal Empire on my own, and I will destroy any pony who gets in my way!
Grogar: Such confidence. Go! Try to take back your kingdom. I shall send you there myself. If you prevail, you may keep it. But when you fail, you will submit to me!

King Sombra: You may have won the battle, but I shall win the war!

Twilight Sparkle: I still don't feel like I'm one hundred percent ready, but will I ever?
Applejack: Knowing you? Nope. 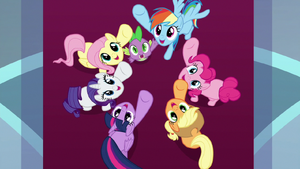 The Beginning of the End - Part 1 image gallery